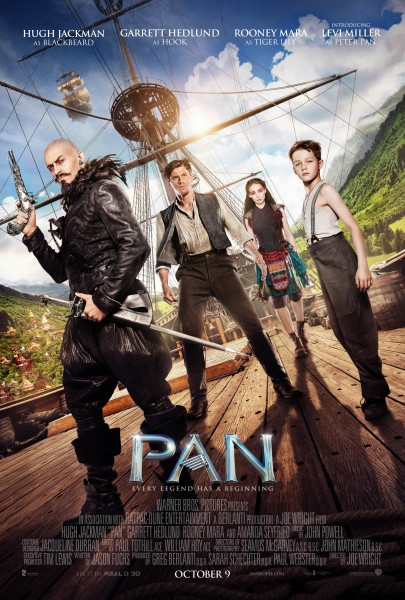 This was terrible in ways Huge Ackman has rarely ever been, which
makes it something of an achievement

I’m not sure. I think I was predisposed towards liking it, because I have a nostalgic love of the original story, or at least earlier versions of Peter Pan (that don’t include Spielberg’s Hook, which I still loathe with every fibre of my being to this day, like all good-hearted people). The thought of a ‘prequel’ didn’t particularly excite me, because it just seems lazy to me, or like a boring stealth way of trying to ‘reboot’ Pan without having to do too much work.

Alas, now he’s made a flick I downright disliked. My problem is not the direction per se, since it’s probably as well directed as crap of this kind could be. I just feel like the script itself is a misbegotten and awful thing that should never have seen the light of day.

Fundamental problem for me is this: taking the J.M. Barrie story of Peter Pan and transforming it into a generic action fantasy hero’s journey Chosen One bullshit is a crime. It’s a goddamn crime. It’s the equivalent for me of making a heist movie where Buddha and Vishnu have to pull off one last score, or taking the story of Florence Nightingale and changing her into a Black Widow-like assassin who takes down the Russian Mob, as she beats people to death with her lantern.

It’s not only an inherent mismatch: it ignores the essence of the characters, and the essence of the original story and just uses them as recognisable placeholders in a script that could otherwise have just had different names with the same results.

It’s as generically generic as humanly possible, and also a letdown in terms of what the characters are reduced to. Peter Pan (Levi Miller) is an orphan during World War II in London. We see his mother abandon him at an orphanage. The nuns running it are sadists. They even feed them gruel.

And then the pirate Blackbeard (Huge Ackman) in a flying ship comes and kidnaps a bunch of kids to work in his mines.

I know, right? Of course the Peter Pan story need another pirate in it. Of course it did. Blackbeard is all mean and stuff, and doesn’t even really have that much of a beard, but he can lead his slaves and crew in a rousing rendition of Smells Like Teen Spirit when the situation calls for it.

What’s that you say: “Why on earth would they be singing Smells Like Teen Spirit”? Well, allow me to retort by saying “And they sing a bit from Blitzkrieg Bop a bit later on.”

'Awkwardly cringeworthy' are the word that comes to mind about much of what I watched, maybe a bit against my will. I do recall having goosebumps on my arms during a couple of these aforementioned scenes, but it wasn’t the goosebumps that come from watching something incredibly cool or scary. They were goosebumps of embarrassment. I didn’t even know such a thing was possible, but it happened, so here we are.

From here, for me, things get even worse. Various elements familiar to anyone that’s vaguely familiar with the Peter Pan properties means we can look forward to Tinkerbells, Tiger-Lilies, more pirates, more of everything and a crocodile, all with the express intention of setting up a franchise. Telling a prequel story like this, explaining Peter’s origins, only really makes sense if there are another three movies to milk the franchise to its utmost coming down the track.

Otherwise, why would you bother? I found this flick staggeringly unenjoyable, and much of that blame I lay at the feet of Huge Ackman. I would call his performance as a strange pirate “camp” except that “camp” implies that it was fun. Instead he was just kind of embarrassing, like watching a relative berate the wait staff at a restaurant over something completely trivial and out of their control. You just wait for it to be over.

I shouldn’t just be sitting there waiting for and wanting something to be over. Does no one any favours. Other than the little I’ve already mentioned, there was this prevailing feeling for me like what I was watching had no real reason to exist. This is an awful spoiler, I guess, but the fact that some screenwriters sat around and asked themselves “How can we make a story about an immortal boy who can’t grow up and can fly more realistic and believable and stuff?” “How about we make him half-fairy?” “Perfect! Pop open the champagne, we’ve struck gold!” speaks volumes of craptitude for me.

That they felt that there had to be a somewhat biological reason as to why Peter can fly staggers my goddamned mind. What it most reminded me of was the impulse that George Lucas gave into when he decided it would be a gloriously compelling storytelling device if he made Anakin Skywalker the product of a virgin birth involving midi-chlorians. And look at how well that turned out.

That they decided to make Peter half fairy, when the fairies in these stories are a cross between an annoying butterfly and a mirrorball, is even more unintentionally hilarious. Just think (and then don’t) of the logistics on that one.

Did you ever find yourself sitting there, during one of those earlier Peter Pan movies, thinking to yourself “How in blazes does Peter manage to fly, anyway?” No, you probably didn’t, for the same reason you’ve never asked yourself whether there was a chemical / physical explanation as to what’s in pixie dust that gives fairies all those wonderful powers, or whether mermaids tails ever go wrinkly in the bath. There are elements we don’t need explained in these kinds of entertainments.

If I have another problem with the whole endeavour, and I have plenty more, it’s that in the original story, it was Wendy and the boys who are the main protagonists. Peter and Captain Hook and Smee and all the rest are the entertainment. If Peter starts off the protagonist, and Neo-like becomes the Chosen One prophesied to liberate Neverland from the evil wigs and overacting of Blackbeard the Pirate only if he believes in himself and his ability to fly, then who the hell really cares?

There are only really two bright spots for me throughout this. There is this weird choice which somewhat pays off to give the inevitable Captain Hook a sympathetic origin, in that he starts off as a fellow prisoner with Peter, and ultimately helps him out in his revolution. Get this: they start off as friends! Garret Hedlund, an actor I’ve got an unusual amount of time for, who I thought was particularly great in Walter Salles’ version of On the Road, essentially plays Hook like Harrison Ford as (a much younger) Indiana Jones, and it’s fine for this material. Each line of his dialogue walks this precarious tightrope where I was never sure where he was going to end up, or if linguistically he was going to fall off a cliff, but he nails plenty or enough.

Tiger Lily as well was fine enough, as played by Rooney Mara. She has come to fame for more difficult, more compelling roles like the lead in Girl with the Dragon Tattoo or the disgruntled ex-girlfriend of evil mastermind Zuckerberg in The Social Network, but here she gets to be charming and have axe fights with Huge Ackman! She’s fine in the role, and could probably stand to do more actiony-fare rather than just serious roles in classy productions for credibility and awards and stuff.

The flick came in for some criticism not because it was crap (which it is, it most certainly is), but because an obviously non-Native American Indian was cast to play a role that at least in the books is referred to as being a Native American Indian. To that I say “Bullshit!” Why? Because the goddamn tribe of which she’s a chief’s daughter are called the Piccaninnies. Talk about picking and choosing your early 20th century racism battles and what to stand up for.

At least the makers tried to deflect criticism by making the tribe a whatever melange of ethnicities, including having celebrated Australian Aboriginal actor Jack Charles play the chief. He’s in it for very little time, but he has a very distinctive appearance and style of performance. It’s also, for me, very odd to see someone in a major Hollywood production (even one that’s a horrible flop) who I also saw a week or two ago walking down Smith Street in Collingwood, minding his own business, with his great shock of white hair.

These pleasures aside, the whiff I got off this early was a whiff of The Lone Ranger, and it never dissipated. In fact, that pungent stench of overreach and pointless, grasping failure permeated everything, and made me gag by movie’s end. I did not like this, no indeed, and at least I take some small consolation in the fact that there will not be, if the gods of finance have anything to say about it, a sequel to this prequel.

Thank the fairies for small mercies.

--
“More than you can imagine, I promise that you will see me again in this world or another.” – a mother’s promise unbroken - Pan