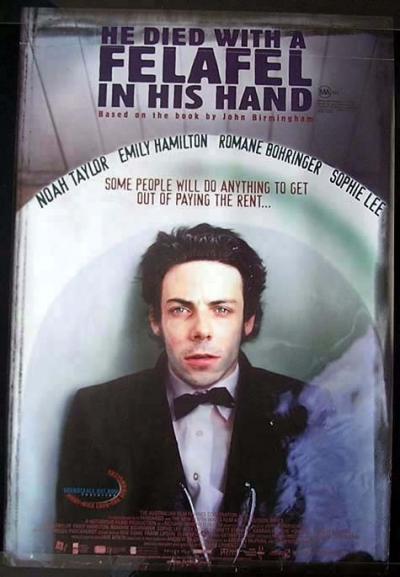 It just struck me, falafel is the tasty chick pea mix, did they actually
mean 'kebab', as in, a falafel kebab in his hand? Because...no, it
doesn't make much of a difference I guess

I always intended to write a review that started thusly, and now I’ve finally achieved that lofty ambition. I am a simple man, after all, with simple tastes and simpler pleasures. It doesn’t take much to amuse me, but it takes much to maintain my interest for more than a few minutes at a time.

He Died With a Felafel in his Hand is one of those classic books, like Trainspotting, like the Bible, that’s more of a collection of stories than a story with a single protagonist and a clear narrative, which, in the hands of cinema geniuses, is transformed into a story with a protagonist and a clear narrative. The book, by John Birmingham, is a funny collection of the kinds of nightmare Australian sharehouse experiences which should (but probably won’t) close the book on writing about such stuff for future generations.

The film takes some of the material and transforms it into a story about an aimless young chap called Danny (Noah Taylor), who lives in a number of sharehouses, and has a bunch of hangers-on and ridiculous experiences. The story starts in Queensland, moves to Melbourne, then finishes in Sydney.

The great difficulty in reviewing one of Miyazaki’s animated movies, compared to just watching them, is that the temptation to reel off superlative after superlative usually proves too great for the humble reviewer. Also, Miyazaki is revered to such a degree as the reincarnated Japanese alternate reality Walt Disney that everything he touches is tainted with greatness in the eyes of reviewers, humble or not.

The high praise makes latecomers come to his films with an insane level of expectation, which usually results in bewilderment when they see something like this, Princess Mononoke or My Neighbour Totoro which are different but simpler stories than what they could have expected.

Well, I’m neither a worshipper nor much of a reviewer, so it’s as easy for me to reel off expletives and superlatives as it is to watch one of his flicks and to sit there, thrilled out of my goddamn mind.

I don't think that there's been a film quite like it, to be honest, realised on such a scale, and so lovingly. Such attention to detail, such awe-inspiring design and creativity, I almost cannot believe that such a film was
allowed to be made in the current culture of big budget film making, where the shoddy special effect is king, and inspiration and inventiveness are as alien as the concept of personal hygiene is amongst users of public transport.

Having not read any of the works of JRR Tolkien, I could potentially be at a disadvantage in discussing the source material and its transition to the big screen. What I am qualified to mention is that it is patently obvious that Tolkien has been ripped off by nearly every fantasy writer and filmmaker for the last sixty years. And perhaps they can be accused of interfering with his desiccated remains in a truly unwholesome manner in the pursuit of financial gain or sex with strange women. The same accusation cannot, I feel, be leveled at Peter Jackson, who has approached the characters and the story with such an obvious love for the source material, and an exhausting amount of dedication and creativity that more than justifies the entire venture, despite the staggering amount of merchandising.

dir: Kevin Smith
[img_assist|nid=1070|title=This film is about as tragic as these costumes|desc=|link=none|align=right|width=367|height=553]
The question burning on everyone's lips is not "Will I be selected for Big Brother II?" or "Just how does someone sow their lips together?", it is moreso, considering the grand opening of the aforementioned Kevin Smith film in Australian cinemas yesterday, that question remains "Is Jay and Silent Bob Strikes Back better than Dogma?"

The answer, like any good cocktail, is mixed at best. Smith has taken the sacred duty of satisfying the dictates of his ego to ridiculous extremes, to the point where he now has made a film about his other films, a self-referential exercise in self groin rubbing that represents an increasingly tightening spiral of self-indulgence. Couple that with a breathtaking amount of pettiness on his part, and you are left with a bloated,
embarrassing film that occasionally works brilliantly, yet more often than not stinks like week-old entrails in the sun.

Not content with the screen time he and his good friend Jason Mewes have had in the past, he's decided to up the amount of time they appear to the point where they are practically in every scene, with hilarious results ensuing. An arguably simple formula can be applied to Kevin Smith films, that being the greater the
amount of time Silent Bob and Jay appear on screen, the worse the end result.

The actual cinema (no. 4 Hoyts) I watched it in has a grand tradition, a legacy to live up to. Nearly ten years ago I had the good fortune to be horribly drunk on a Sunday night, and the female friend in my company was even more drunk than I. As she was an esteemed employee of the Hoyts Corporation, we were lucky enough to just be able to walk into any of the films showing, whenever we wanted to. This particular night we staggered into a "special" screening, an advance screening for an upcoming release that was expected to do big business.

The audience was packed, we tried to quietly make our may to the only available seats, but had as much luck as a sumo wrestler wearing nylon. It was about half way through the film, but considering our blood alcohol levels, it didn't matter.

dir: Antoine Fuqua
[img_assist|nid=1073|title=Now with more machismo!|desc=|link=none|align=right|width=350|height=519]
Could have been. This flick could have been a contender. It is well acted (mostly), well directed, and with one monumental example to the contrary, mostly well scripted. It is deeply unfortunate that the monumental fuck-up that occurs in the script at about the 1 hour mark renders the rest of the film an exercise in pointlessness, but then again, if life has taught me anything, it’s that you can’t have everything, and even if you did, some bastard would probably break in and steal all your shit when you were at work.

It’s the way of the world. None of this justifies the awful and insulting way that the film degenerates into a true Hollywood morass by its end, but hell, as I’ve mentioned a million times before, most films stuff up the ending because they never put as much work into the conclusion as they do with the pitch:
(pitch meeting between producers and studio execs)
“Um, Denzel as the bad guy?”
- “Sold!”

dir: Tim Burton
[img_assist|nid=1077|title=Kiss me you fool|desc=|link=none|align=right|width=337|height=425]
Even though it's been out for only two weeks, already the topic of this film is straining to raise even the mildest level of interest anywhere. We get gangbanged by the hype regarding new films leading up to their release, they're released, then everyone collectively reaches over and hits the snooze button. Being ever timely in my responses, now that any interest has pretty much waned, I have seen fit to post a review of Tim Burton's latest coke fueled extravaganza.

Tim Burton's only real mistake was in remaking what is usually referred to as a "classic". He should have remade a different classic, that being Planet of the Gapes, originally directed by Tom Byron, starring himself, Allysin Chaines, Alisha Klass, Sabrina Johnson and a host of other starlets and studs. I have not the courage or the mortal fortitude to tell you readers what a "gape" is, suffice to say it is one of at least a hundred things I wish I'd never seen, and curse the internet each day for inflicting it upon me.

Regardless, the mere concept of doing a remake of Planet of the Apes is enough to raise people's hackles, and as appealing to long time fans as it would be to announce to Christians that you're planning on re-writing the Bible, replacing all references to "God" and "Jesus" with "My Cock". They'd love that.

dir: Stephen Sommers
[img_assist|nid=1100|title=What do you mean we're both shithouse? Surely one of us is worse than the other?|desc=|link=none|align=right|width=450|height=304]
Yes. You must think I am kidding. I am not. I sat through this piece of shite, and now it's your turn to suffer.

Some films are unintentionally stupid, because they're made by stupid people (Tomcats, Battlefield Earth, Armaggedon, Music from Another Room), other films are stupid because they're made by intelligent people who continue to try to underestimate the intelligence of the lowest common denominator, and never succeed (Godzilla, Independance Day, Look Who's Talking 15). Some films look dumb, but are actually very smart (Scream, Men in Black). Then there's those "tongue in cheek" films which are a bit dumb, which you're just supposed to laugh at and forgive them for because of the twinkle in their eye and their mischievous grin.

Why I watched this is still a mystery to me, since I thought the first film was a piece of shit as well. Perhaps there was some subliminal imagery in the advertising that planted the idea in my subconscious that I'd willingly suspend disbelief long enough to enjoy the ride. However it may have happened, it did, and here are the fruits of my painful labours.