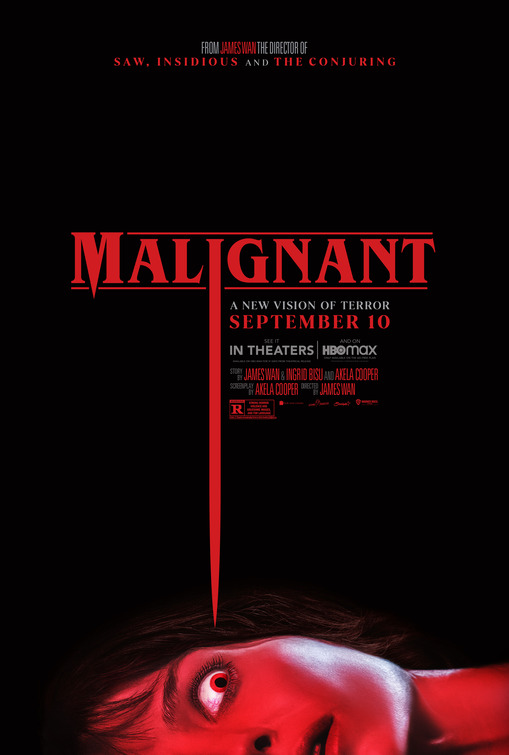 Dario Argento must be spinning in his grave. Quick, someone
kill him so he can spin in his grave already!

Nothing will top this, not this year. The virus could mutate into something that attacks people on public transport with fangs and teeth, or that slits throats at family gatherings or makes ivermectin shoot out of people’s noses, and it still won’t be as insane / dumb / manic as what happens in this flick.

Australia’s Own James Wan has been making massive blockbustery monstrosities for years now, but his heart seems to belong to the horror genre. I guess once you’ve directed so many Saws and Conjurings and Annabelles, there’s strengths you believe you have as a director that you want to play to. He pulls out all the stops trying to maximise the virtuosity of the incredible camerawork in the service of a flick where someone or something just kills a bunch of people in gruesome and specific ways.

He’s not pretending that he reinvented the genre: he’s specifically proceeding in the ways that seem to honour Dario Argento and the other Italian hacks that birthed the misbegotten child of giallo cinema into an unwilling and unsuspecting world.

And before I proceed any further, let me clarify that Argento was and still remains the hackiest of hacks ever. He has made films so terrible that I shudder just remembering them. But he made a few okay ones. Suspiria may be a classic, but I would say that Malignant probably draws from the Profundo Rosso / Deep Red and Tenebrae side of things rather than the supernatural ones, but hey, it’s not like it matters. Even Argento would probably never had twists as bonkers as this flick does.

Madison (Annabelle Wallis) is pregnant, and has a terrible, shitty, violent husband who won’t be around long enough to matter, and nor will I even record his name or the actor’s either, such was my disgust with him. The important thing to note is that he assaults his heavily pregnant wife by bashing her head against a wall.

He is soon dead, and very violently dead at that, and Madison loses the baby. She tells her sister Sydney (Maddie Hasson) how desperately she wanted a child in order to have a biological connection to someone.

For, you see, Madison was…adopted!

Huh. It’s meant to be a surprise to Sydney, but not to us because we saw a bit at the beginning of the film that presumably Sydney hasn’t seen yet. On video tape no less. Video tape aesthetics play a surprisingly big role in this flick. The camera even goes into the workings of a VHS player at some point. I’m not sure why. Does anyone even have VHS players any more? And if so why? Are they waiting for tapes to become cool again the way vinyl has?

No, it’s to remind us of a time when the way most of us brought horror into our lives wasn’t from being born into shitty families or even shittier circumstances, but from hiring tapes from places, bringing them home, closing the blinds, and watching people do unspeakable stuff for 90 or so minutes.

In the opening scenes, Australia’s own Jacqueline Mackenzie plays a concerned doctor at some gothic Arkham Asylum-style nuthouse, where some patient called Gabriel is killing a whole bunch of people for no good reason. After a few more people get killed trying to sedate this person, Dr Weaver steps up, and delivers a fateful line, being “It’s time to cut out the cancer.”

Maybe if the cancer had been cut out earlier a bunch of people wouldn’t have been killed?

Anyway, that prologue is set in the dim distant reaches of the 1990s. It then jumps to the present day, with Annabelle and the shenanigans that transpire around her. It turns out that someone is now killing everyone that was at that mental hospital, and Annabelle keeps seeing all the murders happen.

Is she psychically linked to the killer? Could be. Is she the murderer? The cops think so. Is her nice sister the murderer? Unlikely. What’s the link between the murders and her childhood imaginary friend Gabriel?

Uh, wut? Seems Annabelle had an ‘imaginary friend’ that used to get her to do all sorts of bad stuff, until one day he didn’t anymore, and now he’s back not only with a vengeance but specifically to get vengeance.

I cannot, and won’t, begin to describe how fucking nutty the eventual explanation is for what’s going on. I just can’t. It’s not even a twist you can describe, or should describe. It’s up there with the twist in the movie Orphan from a bunch of years ago. It’s on the same level as watching a horror flick and finding out the murderer is Margaret Thatcher. I don’t mean because it’s someone likely or well-known in history, but because it’s such a fucking bonkers idea to put forward.

Here’s another way to describe it: in the film Adaptation, which has Nicolas Cage playing twin brothers, one of whom is a ‘serious’ screenwriter and one of whom is a moron who nonetheless sells a dumb screenplay: That screenplay had both a villain and the detective chasing them being the same person, down to staging chases between detective and serial killer where one’s on a horse and one’s on a train.

That is the bonkers kind of level we’re dealing with here, only more hideous / unlikely / nonsensical.

The avenging murderer dresses in a weird combination of fetish gear and like The Crow from the ill-fated 90s movie, but also has long black hair like the peak era of Japanese horror flicks like Ring and The Grudge etc. It’s a mish mash, if you like. The murderer, who we’ll call Gabriel, murders a bunch of people very violently, but also fashions a weapon out of award that a surgeon received, which makes it seem like the people who gave her the award knew what was going to eventually happen to her. Seems a tad passive aggressive.

I’m a bit of a jaded soul, so I’ll be the first to admit that, even with the murders following a kind of Argento framework, I never really found them scary or horrifying, and maybe that wasn’t necessary. The flick tries to go for way more than jump scares and stuff appearing from where it shouldn’t be, and Annabelle does run around a lot being scared and closing doors and windows and stuff, but her face rarely changes expression. And, I also have to point out, there’s a part of the flick where someone is running around with what looks like a mask of Annabelle’s face, and it’s just as animated as she is.

If there is a problem, or a virtue with where the flick ends up, Gabriel becomes some kind of superhuman villain that kills a whole bunch of people not because he needs to, but because that’s what James Wan wants to show. Gabriel goes from killing a whole bunch of women in a jail cell for pissing him off to killing a precinct full of cops just for the fuck of it. This is not a Black Lives Matter (BLM) moment, or confirmation that All Cops Are Bastards (ACAB) moment, but I have no idea what the purpose of that was other than “so now in this section I want Gabriel to be invincible and kill a whole bunch of people”.

Out of all that, as gruesome as a lot of the killings are, the moment that made me laugh like a drain involved Gabriel killing every cop on duty except two, being the ones that were leading the investigation, and looking like he’s about to throw the chair through a window in order to make good his escape. Instead, just to be a prick, he musters all his supernatural strength to throw the chair at the two remaining cops, just to add literal insult to actual injury.

I think – I dunno. I’ve seen arguments online that this is a good horror film. I think it’s hard to say, really. It’s just so implausible, and that’s not even taking the supernatural stuff into consideration. It’s hard for me to tell whether it’s a good ‘bad’ movie or whether it’s just risible trash that’s just as bad as it sounds. I think they get some elements right, in so far as staging a weird 90s homage to a weird 70s genre, but I think it’s just too fucking silly, especially at the end, for it to be that much more than a novelty.

Twenty years ago, maybe even thirty years ago I would have (metaphorically) killed to see a flick this nutty with a room full of friends on video tape, perhaps, especially if we’d been smoking / drinking up a storm. And while I did laugh watching this, maybe it needs a bit more of a communal experience to really work. People watching alone have no-one to turn to to say “can you believe that shit? No way!”, and if you do, the authorities can’t be far behind.

Malignant. Yes I know you set it up for a sequel. There is no way there should be a sequel.

--
“You let them tell you I wasn’t real. That I was just a voice. Now I’m going to make them pay for what they did. One by one ” – yes please - Malignant