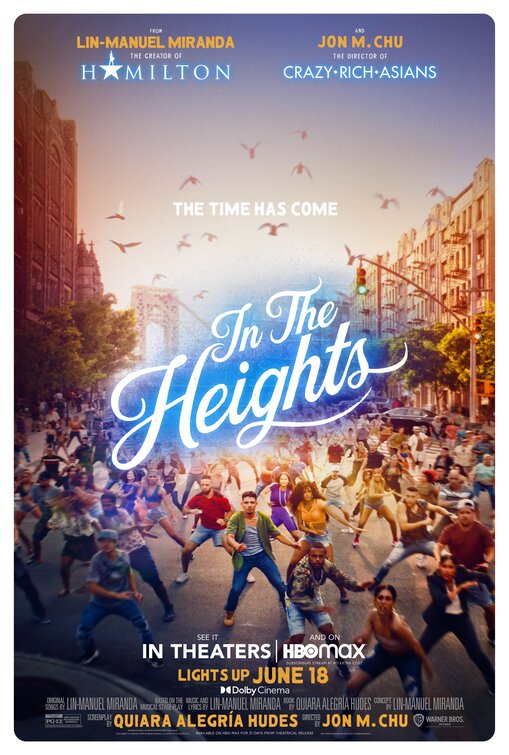 I await the sequel about Heidelberg Heights and all the
wonderful people who live there, hop to it, Lin Manuel.

I’m not…the target audience for musicals, that should be fairly obvious. I have been trying to finish watching Cats for over a year in order to review it, and I haven’t been able to complete it, despite trying over 20 times to get through it. When I die and go to hell, among the many other torments available and specially designed for me, Mamma Mia will be playing loudly and on a loop.

I guess there are times when I’m able to unclench my jaw and relax into these strange musical – cinematic hybrids. I really enjoyed Hamilton when it came out last year (the film of the original cast performing on the stage, for Disney+), and that required no particular love of the genre or love of America’s Founding Fathers. And, despite never having been to the New York suburb of Washington Heights or having anything close to Latinx heritage, it’s not impossible for me to enjoy a song-and-dance extravaganza about a bunch of people who live in a vibrant, caring community.

It specifically honours the Caribbean, central American, South American and other permutations heritages of the people who make up what seems to be this most melting pot of melting pots, seeing in them the story that has played out for millennia across the world but in terms of the States the story of migrants aspiring to a better life for them and their families.

Which is the story of chumps everywhere, I guess. Many of these people are trapped within dreams, their own dreams, the dreams of their parents, parental expectations, community expectations, all of which can be pretty far from what real life brings on.

Usnavi (Anthony Ramos) tells a story from what looks like a bar on the beaches of the Dominican Republic, to a bunch of snot-nosed kids. What story is he telling them? Well, it’s the story of how he followed his dreams, or his dad’s dreams, or someone else’s dreams. Anyway, most of the kids look bored, but the brightest of them, an eager girl, listens intently, about the events of one particular summer.

Washington Heights is a real place, but the Washington Heights depicted here is not a real place. It’s not like it has to be, after all, this is a musical, and no musical since Grease has even been factually accurate. There is almost no crime in Washington Heights; they aren’t any homeless people or people shitting in alleyways, no drugs to speak of. Just happy, hardworking people who believe in the myth of immigrant prosperity: If you work like a dog for 40 years, then maybe your kids will have a happier life than you.

It's that elbow-grease, bootstrap bullshit they’ve been peddling to “foreigners” for centuries, and how else would you get people to work for less than minimum wage, in a country where the minimum wage isn’t a living wage?

But all these characters believe it, embody it, and it factors into their version of the (Latinx) American Dream. Kevin (Jimmy Smits) literally sacrifices everything to get his academically hard working daughter Nina (Leslie Grace) into Stanford, even though she doesn’t want to be there. Usnavi’s every thought is of moving back to the Dominican Republic, in order to fulfil his father’s dream(?) Is he trying to relive his father’s dream? We keep seeing him on what looks like an island, so, did he get his wish, or his father’s wish? El suenito, the little dream, is a phrase we will hear sung and said a thousand times.

Usnavi wants to go, Nina doesn’t want to stay away, Vanessa (Melissa Barrera) desperately wants to get out of the Heights and move, I dunno, uptown, downtown? Somewhere where her people (without solid credit records) aren’t really able to go, regardless of how great their fashion designs are.

There are plenty of familiar push – pull dynamics, and various other connections romantic and otherwise between the various members of the barrio. There’s no real drama to speak of, no real tension, political, religious, sexual or otherwise. There’s one gay couple (Daphne Rubin-Vega and Stephanie Beatriz) but there’s not a word or glance about it, in a supposedly staunchly Catholic hood. Usnavi and Vanessa seem to have some romantic connection but I’ve seen more sexual or romantic chemistry between statues and pigeons. The fundamental should I stay or should I go for Usnavi is meant to be “does he follow his dreams or does he stay behind for a woman he doesn’t talk to and barely makes eye contact with?”

I don’t mean to be mean to a character for being shy: I have a world of sympathy for shy people, seeing as I am a person who suffers from crippling shyness, or at least has experienced it at different times in my life. And I, too, deeply understand the concept of being utterly besotted with someone, to the point where you can barely form intelligible sentences in their presence, even when you’ve known them for years.

It’s just that, and I hope it won’t feel like this when I see the film down the track, because I can imagine watching this a bunch of times, whenever Usnavi and Vanessa are the only ones on the screen, everything grinds to a halt, and it just feels like it’s never going to get moving again. And, thankfully, the awkwardness Usnavi feels solely in her presences never appears in any other scene. He is incredibly empathetic and charismatic throughout. I remember seeing him in a couple of roles in Hamilton last year as well, as Hamilton’s son who dies in a duel, and some other jerk, where he was fine, but here he shines. He carries an entire construct on his shoulders, and we’re all mostly glad that he’s doing it instead of Lin Manuel Miranda.

I know, I know, he wrote it, he should be able to play whatever role he wants. Thankfully, wisely, Miranda only plays the smaller role of a piraguero, a chap selling shaved flavoured ice treats from a pushcart during this incredibly hot summer. Ha, that’s so funny, they think a summer with rolling blackouts and 40 degree temperatures is hard to endure, that’s so adorable.

It’s funny, to me at least, that spotlight hog Miranda, as the piraguero, has a rivalry with a guy in an ice cream truck who keeps stealing his customers, and he’s played by Christopher Jackson, all too briefly, who doesn’t get to do much more than angrily shake his fist at his rival. Jackson was so great as George Washington in Hamilton, I’m just saying.

Yeah, okay, so I mentioned that all of this is happening over a despicably hot summer, and it’s all leading up to a special dinner at Abuela Claudia’s. I haven’t even begun to sing this dear woman’s praises. Apparently the actress played the role since the first time this musical was ever performed, so if anyone else on this planet could have better played this living saint, I’m not seeing it. The daughter of a Cuban émigré, she has worked her fingers to the bone and even brought up strays like Usnavi when he lost both his parents, sacrificing herself so that others may rise. If she wasn’t so wonderful I would puke with rage about how manipulative this bullshit is. Apart from the dinner itself looking great, her singing is so sweet, and her song Pacienca Y Fe would wring tears from the statues of Easter Island.

Oh yeah, it is a musical, so much of it is told in verse and song rather than dialogue, but this isn’t one of those flicks where absolutely everything is song. Just most of it, and those are the best bits, truly. 96,000 is a bunch of people at the pool singing about how much $96,000 would change about their meagre lives, and it turns into one of those old timey water dancing routines, which is pretty funny. These aren’t people dreaming of winning millions through the lottery or through suing someone for an accident – they’re dreaming of tens of thousands of dollars changing the course of their lives.

Carnaval Del Barrio is probably the other big, great number, acting as a farewell for some of the characters, only some of whom are going on to bigger and better things (some who definitely aren’t), as it meshes on of the film’s many (mild) themes about being powerless through poverty etc, and powerful by making choices that benefit not only them but the people around them as well (during a blackout, of course).

The big romance that works in the flick, and leads to charming and horribly fake dance sequence on the side of a building, is between Nina, the girl who doesn’t want to leave the barrio despite being ever so smart, and Benny (Corey Hawkins), who works for her father and clearly has the ambition and hunger to eat all of Wall Street. Benny is one of the only characters in the flick who isn’t conflicted about anything. His love for Nina doesn’t seem to be the controlling kind; he loves who she is and isn’t going to stand in her way, whichever direction her way happens to be, nor is he trying to gold-dig her and ride her coattails. Their scenes together, very much unlike Usnavi and Vanessa, are delightful.

Yes, I am a grown man and I used the term delightful, I feel no shame for it. A lot of In the Heights is delightful, and really enjoyable, even as I get that lingering feeling that it’s a bit trite and simplistic and gives no sense the real difficulties people from these neighbourhoods face, with racism, gentrification, all that bullshit. It is a long arse film, though, have to warn you. It’s two hours and twenty minutes long, and I’ve have to say that most of those two hours are well spent. I loved the songs and the music, and the performances, despite having no particular love for salsa / merengue / polka music or musical theatre in general.

And the immigrant story is always one that on some level I relate to, being a child of immigrants who hoped for a better life in a nation born of colonisation and white supremacy. But none of that resolves any of the lingering questions that remain, no matter how many people of how many nations you throw into the melting pot to fight against each other and not their betters. And it was kinda naïve to think this was going to do anything other than give us something of an enjoyable time along the way.

--
“Shush, I want to listen to my neighbourhood” - In The Heights