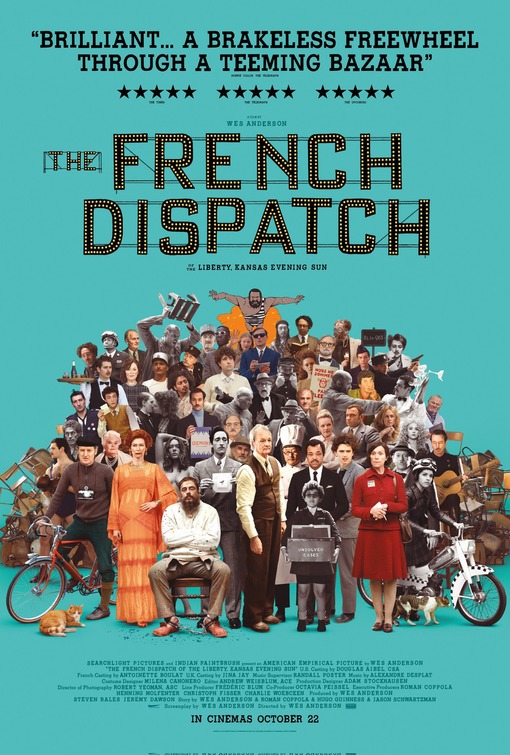 All so many people, most with very little of worth to do

It’s impossible to know whether this flick is peak Wes Anderson, or whether his next flick will be even fussier. Each time one of his flicks come out, I think “it can’t get any fussier than this, can it?” and every time I’m wrong.

At this late stage of his career, to expect any different would be foolish.

The French Dispatch’s full title is The French Dispatch of the Liberty, Kansas Evening Sun. How you feel immediately after hearing or reading that could impact on your reaction towards the film. If, upon hearing that, you rolled your eyes so hard you might have strained something, or you fought the instant urge to punch a kitten in the face, the preciousness of the ensuing endeavor may be a tad too much for thee.

After all, fans of Wes Anderson films are a special bunch. Like the collectors of Sylvanian Families anthropomorphised unholy animal hybrids or the people who are now drinking their own pee as a coronavirus cure, they’re not like other humanoids. Imagine the kind of person for whom Wes Anderson movies are the best movies they’ve ever seen.

You’re either picturing Wes Anderson himself, possibly wearing a cravat or an ascot, or legions of penny farthing riding, artisanal picklers, waxed moustache baristas or people who crave a gluten free lifestyle despite not being gluten-intolerant.

In other words such a creature doesn’t really exist. And yet those films keep being made, and someone must be seeing them.

Well, I saw this one now, and it’s not only a homage to all things fussy and Andersonian; it’s also a love letter to that other bastion of fussiness and great writing, being the New Yorker magazine. Why the pretense that it’s a French supplement to a Kansas newspaper? I have no idea, other than that Anderson wanted to set this flick in France in a town literally called Boredom-on-Apathy (Ennui-sur-Blasé) because that counts for humour in Wes Anderson World. Though the parallels with the New Yorker are fairly transparent and one-to-one, maybe it’s a reference to The Paris Review as well, which was founded by amongst others, George Plimpton, that silver haired razor wit and raconteur.

Yeah, nah, probably not. The editor, Arthur Howitzer Jr (Bill Murray), is probably even fussier than Wes Anderson himself. There are an array of other editors and cronies, all mostly played by the other hangers on and goons who usually populate Anderson’s films. Familiar faces. Familiar, goofy faces.

Mostly, the flick is held together with a tissue of connections, formatting, impeccable set design, but (mostly) is an anthology of stories, some more interesting than others.

There aren’t that many, in case you’ve just set fire to your laptop to ensure you never see this movie. There’s mainly three, and they’re each fundamentally different, in the same way three articles in the New Yorker might be united by their abject tweeness and layout, but not thematically.

The Concrete Masterpiece segment has Benicio Del Toro playing a genius painter who’s also a violent lunatic who’s murdered people. The framing device is an awkwardly-accented Tilda Swinton delivering a lecture about the whole sorry saga to an audience as a lecture. There are (what passes for hilarious bits in a Wes Anderson film, which, at most, amount to a dry chuckle) classically comical sections throughout this bit. It’s kinda farcical, but it takes its cues from screwball comedies (without being slapstick itself).

The painter, a killer, gets to paint one of the guards (Lea Seydoux) who poses for him naked in awkward positions, which has its own laughs, but the bit that makes me laugh the most in this section involves Swinton’s bizarre character, in her relating of the history of this painter. As she delivers her dry, academic lecturing, she can’t help but keep mentioning that she may have had ‘relations’ with the artist, as in, she keeps hinting that something happened between them, pretending she’s mentioning it against her will.

Though she is literally involved in the story of the artist Moses Rosenthaler, she is a minor personage in the drama that unfolds before our eyes, as an art dealer (Adrien Brody) tries to make Rosenthaler into the greatest abstract expressionist painter in the world. When the artist delivers, against his will, the ‘masterpieces’ required of him, they are delivered in a manner which makes them, hmm, not easy to sell.

I really enjoyed this section, not only because it was in black and white, not only because I found it genuinely funny, and not only because of Swinton’s escalating crescendo of admissions about the fact that she is determined for people to know she had sex with Moses Rosenthaler, but what it reminded me of the most of were the first films of Hal Hartley, before he disappeared up his own arse. As in, something can be deadpan and funny, without being too cutesy.

The second section stars all round great Frances McDormand as a journalist covering the 1968 student protests, and deliberately references French New Wave cinema / Nouvelle Vague, only it’s somehow even more arch and pretentious.

Plus it has Timotheé fucking Chalamet, who was in almost every movie that came out last year. At no stage does he scream “DO YOU GAME?” at Frances McDormand, like he does in Don’t Look Up, but he really should have.

He plays Zeffirelli, one of the student revolutionaries who writes a manifesto and carries out over the right for male students to be able to access the female dormitories at any hour of the day or night.

I’m not sure…why, but it’s enough to inspire all the other students to protest, have tense meetings and set up barricades and such. McDormand’s character of Lucinda Krementz intends to maintain some semblance of journalistic integrity and independence, but still seduces Zeffirelli, because why wouldn’t you.

I also need to mention that Chalamet grows the whispiest, poxiest teenage moustache for this section of the movie. It’s hard to capture in words just how poxy it looks, I assume deliberately.

Not only is Krementz involved with her subjects in a manner which comprises her ethically, she even edits and improves Zeffirelli’s manifesto. No good ever comes out of manifestos, but maybe this one time…

This section is enjoyable enough. McDormand is always such a goddamn delight in almost everything she’s ever in, and for me, and probably no-one else, even though she’s clearly not meant to be a French writer, and was inspired by Canadian author Mavis Gallant, to me I couldn’t help but think of one of my favourite people of all time, being Simone De Beauvoir, and how she cut through people and life in her characteristic way. Chalamet is…perfectly suited to playing callow youths. I did not love this section, but I did enjoy it.

The third, and most tiresome section involves Jeffrey Wright playing what pretty much seemed to be James Baldwin, involved in a “heart warming” escapade about cops, top chefs, kidnappers, poison etc. Despite the fact that I love Jeffrey Wright and adore the writing of James Baldwin, this section didn’t dazzle me, in fact it actively outstayed its welcome, and I wanted the film to end.

I’m not sure why it left such a poor aftertaste. Maybe it was because the main characters were mostly cops, and, in any language, as we all well know, All Cops Are Bastards (ACAB), although I’m sure it sounds far more suave in Francais tous les flics sont des bâtards.

These cops, though, no, they’re cool French cops with cool uniforms and capes, and they’re unerringly good. They even have a haute cuisine section of their constabulary, to both reward them for their stewardship of the state, and to somehow also solve crimes of a particular nature.

With Wright’s constant narration, an overly complicated plot involving a criminal gang, an accountant (Anderson mainstay Willem Dafoe) called the Abacus, and the kidnapping of the police captain’s son, it all eventually felt a tad pointless, though of course I don’t ever want anything bad to happen to anyone’s kids, even if they’re cops.

There’s also something about the chef, called Nescaffier (Stephen Park) that felt like a piss-take. I mean, no one takes anything in any Anderson movie seriously, because all his films are meticulous, brightly coloured but somehow grim pantomimes, but every time I heard the name Nescaffier I kept hearing “Nescafe”, the worst of all instant coffees. And I kept thinking that’s Anderson’s joke on us peasants and simpletons, like him saying “you great unwashed don’t even realise this character is named after a terrible coffee you scum probably adore, you fucking rubes”.

I have no idea if that was his actual motivation, and of course I am definitely wrong about it being such. But for reasons I haven’t been able to entirely put my finger on, this section didn’t work as well for me as the others. Maybe I didn’t love the format, or the framing, of Roebuck Wright being interviewed on some awful looking 70s tv set by Liev Schrieber, where they both looked so fucking bored. I don’t know, but thankfully it’s not the end of the film when that section ends.

The overall conceit of the flick is that all the stories are being told within the putting together of an edition of the magazine, but also… well, it’s going to be the last, as we know from the beginning. Bill Murray’s mournful interactions with the staff are sublime, though many of them are so distracting in that they are famous people, like Elizabeth Moss or Fisher Stephens, but they barely get a line hither or thither.

Hollywood megahunk Bob Balaban also turns up, as one of the art dealer’s uncles, but I don’t recall if he said anything, if he spoke at all. I don’t even recall if he mumbled “these pretzels are making me thirsty”. These people are just props to Wes Anderson. When will they realise how little he thinks of them, of their time, of their worth?

There’s also some animation, which is nice, and perhaps recalls Tintin comics, and an early section where Owen Wilson keeps crashing his bike while giving us a completely made up history of this despicable town. There’s a lot, but I wonder whether it outstays its welcome, or whether the elements cohere properly, as one demands from other directors, but possibly not this one.

Maybe once he hits his fussiness and famous actor cameos quota, we just roll over and show our bellies to the screen, content that we’ve had enough.

The French Dispatch is a tribute to another time, another era, different ways that people told stories, and maybe that’s all it needed to be.

--
“There is a particular sad beauty... well-known to the companionless foreigner as he walks the streets of his adopted preferably moonlit, city. In my case, Ennui, France. I have so often... I have so often shared the day's glittering discoveries with no one at all. But always, somewhere along the avenue or the boulevard there was a table set for me. A cook, a waiter, a bottle, a glass, a fire. I chose this life. It is the solitary feast that has been very much like a comrade... my great comfort and fortification.” – thanks, but I don’t remember asking - The French Dispatch