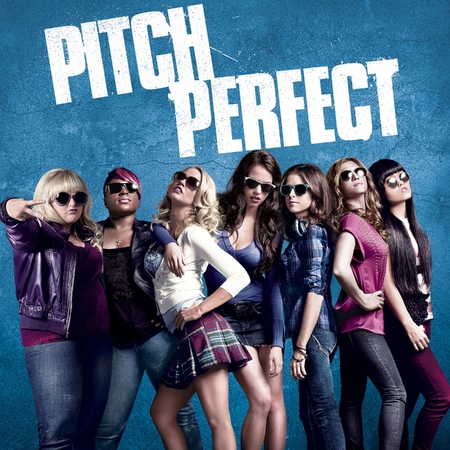 You're all winners, except for those of you who aren't

I like pleasant surprises. Well, duh. What person out of the 7 billion who grace this planet with their presence doesn’t?

It’s the unpleasant surprises we are not partial to. The lump in a bodily location where lumpiness should just not be. The realisation, post bending-over, that one’s pants have achieved a new configuration, including a vast gap where seams should reign supreme. Waking up to find someone, at this happy time of the year, actually dressed as Santa Claus, breathing heavily, in your bedroom, going through your stuff, stinking strongly of meth.

All unpleasant, all unwanted, all unappreciated. Pleasant surprises are far rarer, but much more enjoyable. I enjoyed Pitch Perfect despite the fact that I absolutely should hate a movie like this, any movie like this. After all, it features singing, and is as much a product of the current pop cultural obsession with Glee, American Idol and shit of that ilk.

It’s also so twee-ly American, it’s set in college, it’s structured like a sports film, and it has montages galore.

So how could I like this? How could I have enjoyed a single second of this entire farcical deal? Well, I don’t have to explain myself to you. I just enjoyed it. That’s it. End of story.

Okay, honestly, I realise I do have to justify myself to you, each and every time. In fact, if I don’t justify my opinions each and every time I write something, then surely my reviews would be even more worthless than I suspect they are. If I can’t nut out whatever kernels of goodness exist in the morass of movies, or the dark seams of stupidity, cupidity and evilness that permeate everything else, then I’m not really satisfying the dictates of my heaven-ordained vocation.

Pitch Perfect is a light, funny, breezy, enjoyable film about nothing substantial at all. A ‘bad’ girl (who’s a ‘bad’ girl because she has a little bit extra mascara on) reluctantly goes to college, putting temporarily aside her burning yearning desire to be a DJ in Los Angeles. It helps immensely that Anna Kendrick is playing, if not embodying, this character. It’s hard to see any difference between this and any of the other characters she plays in all the things she gets work in, but the happy reality is that she’s enjoyable as whatever this character is. ‘Generic girl in her twenties’ would seem to be a criticism, a judgement, but it’s not. She’s good at playing likable, only slightly neurotic women who’re confident in themselves but a tiny bit unsure of their place in the world. *Sigh*

Box office gold right there. Becca is somewhat anti-social, and is hated by her Korean roommate, and doesn’t bother going to class or participating at all in the life of the university. Sure, if this was an accurate reflection of the American college experience, and she was a guy, he’d be going to class one frosty morning with multiple examples of the Second Amendment in physical form, which would then only be taken from his cold, dead hands after much carnage had ensued.

But this is a light comedy, so, instead, a different kind of massacre ensues. Her salvation comes in the form of an a capella singing club called the Bellas, led by a martinet and a scold who vomits when her nerves get the best of her. The other members of the group couldn’t be more archetypal if they’d been members of the Dirty Dozen or the A-Team. The star amongst them is the ubiquitous Rebel Wilson. She literally plays a character called Fat Amy, to pre-empt, in her own words, the skinny bitches around her from calling her that first.

Rebel Wilson is getting a lot of Hollywood work playing no variation on her established persona, which is that of a nice, big girl who occasionally says some pretty awful stuff. The difference here is that she actually uses her own accent, her - allow me to pause a second so I can wipe a tear from my eye – Australian accent as this character, and she knows how to advertise her own worth. She has a wonderful line of dialogue where she tells the girls trying to get her to join the Bellas that she is officially the best singer in Tasmania.

Why I find this funny is because, well, if the average American (and possibly some Australians) would have difficulty finding Australia on a map, none of them would have ever heard of Tasmania, let alone be able to position it on the global stage. To them it’s a mythical land where hobbits and thylacines cavort with nymphs and dryads in the wilderness, as they drink from the god of wine’s own chalice.

She peppers the film with similarly ‘out there’ remarks which are clearly improvised, since I can’t imagine the American screenwriters who could have come up with that shit, and many of them are funny. The emphasis in this flick is entirely on the funny, and, on the most part, the flick manages to match the actors and their delivery with the lightness and quickness such an endeavour demands. Forget all about all the other plot bullshit, because none of it matters. They’re the mearest of excuses for a joke production factory that mostly, really mostly, meets its quota.

Sure, it requires a love interest for Becca, but the guy they use is actually pretty funny in a motormouthed kind of way, and I found him in keeping with the rest of the general humourness and humourosity.

The oddest person in the film is a Korean girl who speaks in a whisper, and whipsers shit about setting fires or dead bodies and "Vote Romney” or other similarly bizarre shit, the best of which I’m not going to spoil. It’s a struggle comprehending what she says, and it’s debatable, of course, whether it’s worth the struggle, but hell, I’m here for a funny time, not a worthy time.

As it follows the template of the sports film, there follows every single signpost and milestone you can imagine, and they don’t exactly feel like they’ve been subverted or satirised; they’re adhered to as if they matter, as if we care whether the girls get to the finals, whether the girls win, whether they earn each other’s respect along the way, whether they overcome stuff, or come to terms with stuff, and the like. I didn’t care, but the film cares enough to make all these aspects matter along the way.

Now, I’ve gone on for ages and avoided talking about the singing and music, and that’s probably not fair to the flick, since they do a pretty good job making that stuff not terrible. I have virtually no pain threshold when it comes to enduring awful sing n’ dance bullshit, less that most people, I think, and I enjoyed those elements plenty.

My absolute favourite of all that stuff is the simplest (though I’m sure it was anything but), and involves Becca on her own auditioning for the Bellas by singing a song and using a disposable cup for a beat. I don’t use this term lightly, but it was a brilliant scene. I guess it really helps when they get people who can actually sing (and I’m not naïve enough not to realise there’s production and Autotune all over the place), and in Kendrick they found someone perfect for her role.

Her other, comically embarrassing scene harmonising with another girl in the shower while singing Titanium was also a surprisingly good scene. I could keep using the word “surprising” in every paragraph, so I’ll just stop. I thought none of this could possibly be something I could enjoy, and, look, I’m happier than anybody that I was completely and utterly wrong.

Pitch Perfect is a perfect example of how something completely predictable and conventional can still be completely enjoyable when done right, and I enjoy the hell out of it…

With the possible exception of where the girls were adding ‘a ca-’ to words, like ‘A ca-excuse me?’ or ‘this is a ca-catastrophe’. That was too cute by far, and made me groan and punch myself in my soul, but thankfully that was about the only misstep as far as I cared, in what was a hellishly enjoyable, light flick.

7 times I was one of eight other octoplets, and all I got was this lousy t-shirt out of 10

--
“Nothing makes a woman feel more like a girl than a man who sings like a boy” – that, and orgasms, at least that’s what I’ve heard – Pitch Perfect