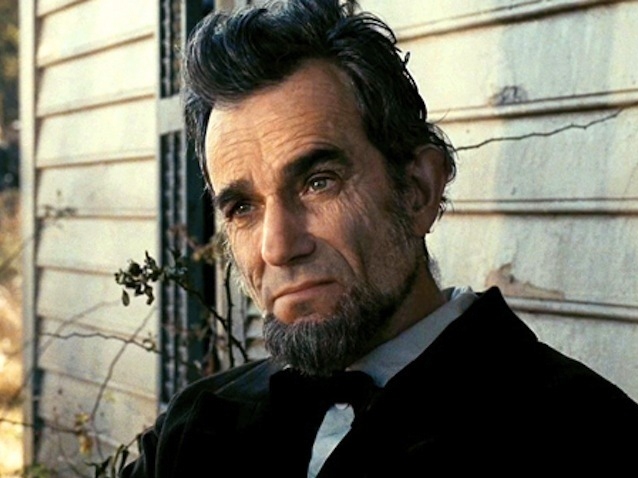 Come, sit on my knee, and tell me what you wish for Christmas,
as long as it is not an end to my interminable anecdotes

You know, I never thought Spielberg had the balls to do something like this, but he did, and audiences never really punished him for it. He’s taken the most iconic, the most universally admired US President (except in the South, perhaps) and depicted him as a crushing, tedious bore, and people are applauding him for it, and lavishing Daniel Day-Lewis with unending praise and statuettes.

Good for them, I guess. The thing is, I don’t even think it was subtle at all. He actively has characters respond with exasperation whenever Lincoln spins another yarn, while every other person sighs and maintains their steeliest “have to look enraptured for the boss” facial expression. People are active, working, doing stuff, usually arguing before he mutters some kind of non sequitur “It wasn’t like this back when I was splitting rails on the Tallahatchie trail”. Then everyone freezes, and we get the feeling that inwardly, they’re dying a little, and fighting the urge to run and hide in a dark, close place, or cry.

“Please, oh please let it be a short anecdote. Please don’t let this story go on so long that I chew my own leg off to escape. Please let his tongue have a stroke, even if he is the single Greatest Statesman and Raconteur the world has ever known.”

Lincoln will deliver his folksy little anecdote or parable, and, quite often, people will go back to what they were doing as if their relief that they can go on with their lives is palpable, measurable, marketable.

But you can’t ignore such a towering figure, especially when he has such a transformative plan for America. The screenplay is by Tony Kushner, who’s a pretty impressive writer, and has scripted some of the better recent Spielbergo ‘experiences’. He uses a bunch of sources, some credited, some not, but the main credited source is meant to be Doris Kearns Goodwin’s Team of Rivals, a good book I’ve actually read but don’t really remember that well. The film is an excellent reminder of one of those moments in history where something completely obvious and fundamental (that people can’t be property) became enshrined into law, thus making a whole bunch of white folks feel good about themselves for a while.

What we, not living in America, not wishing every aspect of our lives to be influenced, imprinted or dictated by that fair empire, know about American history is that, well, a lot of stuff has happened in its short history. The first thing we know about Lincoln is that he had a stovepipe hat, and a funky beard, and he freed the slaves, he fought vampires, and some bastard shot him when he was enjoying his night out at Ford’s Theatre. That’s about the sum and total.

Well, the apocryphal story I’ve heard is that Lincoln was talking during the theatrical performance, and John Wilkes Booth just could not take another interminable anecdote delivered in a genial, folksy manner by a masterful, soft-spoken orator.

The film starts with a battle during the Civil War between North and South, between brother and brother, with, conspicuously, a bunch of black Union soldiers killing or being killed by a bunch of white Confederate soldiers. They’ve all run out of bullets, so the fighting is hand to hand, bayonets and pummellings, and some people being squashed into the mud by boot heels in order to die.

Let’s not forgot how many people died blah blah blah their noble sacrifice blah blah blah. Hundreds of thousands of men dying to prevent the South from seceding from the rest of the States. They weren’t really fighting about slavery, but let’s not get into that.

The film doesn’t concentrate on the war itself, since this is set in the waning days of the war (we know that even if the characters don’t, since most of the movie is set in the last year of the war, 1865). It focuses on Lincoln’s attempt to pass an amendment to the Constitution, the 13th, which would abolish slavery. Lincoln knows, or at least the flick alleges that he has to get this amendment through prior to the end of the war. It’s a cudgel he wields as a magic bullet (just to mix my metaphors) that will end the war, but also as something that won’t be passed if the war ends too soon.

See, that’s the blessed irony here. The majority of the people Lincoln is trying to get to vote to end slavery didn’t give a good goddamn about the plight of the slaves, or the free, or anyone, really. They just wanted a sure-fire way to demolish the Confederate states, whose faltering economies would cease to falter if at all function once the amendment was passed. Demolish is such a harsh word. Essentially, they wanted to force the southern states to come back in to the fold, to paint the Confederate flag on their cars and call them the General Lee, and to henceforth jump over all their problems for ever more.

So our hypermoral and ultra-humanist president is forced to rely on the ickiness and venality of course men to achieve his noble ends. The amendment must be passed by the House of Representatives, which is controlled by the evil Democrats. So Lincoln’s operatives, people like a gross, scumbag of a guy actually called Bilbo (James Spader), have to convince 16 or so of their political enemies to vote with the Republicans for the personhood of African-Americans to become a reality. And it won’t be easy.
[img_assist|nid=1817|title=Won't someone please get me out of having to watch this terrible play? Anyone?|desc=|link=none|align=right|width=500|height=333]
We start to get the feeling after a couple of hours that if Steven Spielberg and Daniel Day-Lewis don’t get the amendment over the line, perhaps all of American history will be written and the past changed, to humanity’s detriment.

Trying times for the Republic, surely. Trying times for audiences, too. This is a long-arsed film, made so much longer by the way time seems to freeze or at least crawl whenever Lincoln is giving us yet again with his wisdom. Spielberg is the most successful director of all time, so he delivers exactly the noble, treacly, uplifting experience that he wants, at least as far as his plans and intentions go. He, or at least John Williams, gets to abuse that brass section in the score so egregiously you’ll think you’re watching the most sentimental bits of Saving Private Ryan all over again.

I am cynical about the whole enterprise, and as a friend of mine said, these people are all so noble that it’s sickening, almost as if none of them did a single shitty thing in their lives, with every second of their time and spoken word being devoted to burnishing up their own nobility, worst of all being Lincoln, of course.
It’s hard for me, as a rank sentimentalist and crybaby of the highest order, not to be moved by this. For many, but not all of us, the notion of creating a political, economic and social order whereby people are considered less than human and a purchasable commodity seems insane. Its inherent horror and wrongness is supposedly self-evident, a reference made in the film several times, because of course it pertains to the Declaration of Independence and its intro stating that all Americans, by default of their Americanness, hold that the truth of the equality of all men, endowed as such by their Creator with unalienable rights, that it is self-evident that it is so.

Well, obviously it wasn’t THAT self-evident, or you wouldn’t have had people being born into, tormented by, and dying in slavery for centuries, would you, you racist patrician motherfuckers? While Ben Franklin can be credited with adjusting Jefferson’s initial draft so as to make the crucial phrase “self-evident”, instead of “sacred and undeniable”, he really should have made it more honest by inserting that all “wealthy white landowning” men were presumably equal in such a self-evident manner, since it took Americans another century and a bit to get rid of this abomination of a notion that people could be property.

Yes, it feels like an achievement, a heroic achievement by the end. The result is never in doubt, except for some people who still live in a mental landscape where slavery was never abolished and the South never lost the war. We know it’s going to pass, the tension comes from how, as in, how close it seems that it just squeaked through. There are ethical compromises along the way (never from Lincoln himself, perish the thought!), but plenty of other people have to get down and dirty to achieve their noble end.

Most notably, the film makes a big deal out of the compromise radical abolitionist Thaddeus Stephens (Tommy Lee Jones) has to make in order to help get the amendment through. Though he’s spent his whole political life screaming out for the equality, in ever sense of the word, of our black brothers and sisters, he is asked, in what should have been the film’s queasiest moments, by Honest Abe, to keep it down a bit so as to not scare the other Republicans.

You see, Lincoln et al, and the film doesn’t hide this, just wanted finish off the South and get rid of slavery: almost none of them believed in the genuine equality of the people being freed from bondage. Stephens did, and seeing him have to eat shit and sit there quietly to avoid giving his evil Democratic opponents ammunition.

It’s also refreshing to see a time in American history where the newly formed Republicans were actually on the right side of history for once, and the evil mostly Southern Democrats were the vile ones trying to keep down the downtrodden and unenfranchised. Jeez, does it make an ironic comparison with these days.

It was enjoyable enough, but ever so long. You feel those threes hours, as if you were experiencing the passage of months and years yourself. It’s prestige cinema that is intended for Oscars and to be inflicted on American school children for decades to come in interminable history classes that will seem to never end. Daniel Day-Lewis’s performance is of course solid because he is who he is, and brings to life a character played by thousands before him, but that doesn’t mean I enjoyed watching this bore of a character, which was possibly the intention, most of the time.

Americans love nothing more than ‘art’ that reflects back to them what uniquely awesome people Americans (ie the people who look and think most like themselves) are, so they can come out of this feeling pretty damn good about themselves. Me, well, I can be grateful that people have stood up for the rights of others in the past so that most of us have this elusive and illusory thing called ‘freedom’ today, but I am intrigued more by those who always seem to find what they think is good reason for standing in the way of such necessary change, and pass it off as conscience or righteousness.

Really, you soulless jerks? Voting against the abolition of slavery with pride? Your names should be reviled throughout history, with your great-great-great etc grandchildren looking away in embarrassment every time your names are mentioned.

I can’t tell you if it’s a good film or not; it’s too coated in prestige and portentous import for me to see beyond the trappings, but I can say that I did not hate the film, and the strength of the script surmounts Spielberg’s most mawkish tendencies. Also, it’s mostly people talking, so if human communication bores you I recommend it to thee not, but I do so love the sound of other people’s sweet voices.