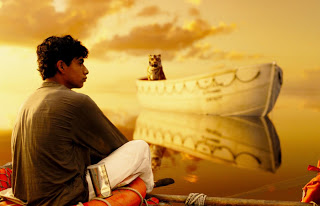 Chillin' on the high seas, with your new best friend

A lot of what I’m going to say about this beautiful movie is going to sound churlish, ungrateful and unfair. So be it. Someone has to do it. So much of the rest of the world is tripping over itself saying what a wondrous movie this is, that I can’t help but be a little contrary.

But until that time when I let rip with both barrels, let me lull you into a false sense of security by praising this film’s many virtues.

No, Life of Pi is not about pies, or about the mathematical constant of π. The diameter or circumference of no circles was calculated during the making of this movie. It’s about a guy whose nickname is Pi (Irrfhan Khan) who survived a harrowing experience and lived to tell the story to a writer (Rafe Spall). Lucky for the writer, eh, because he would have been stuffed otherwise, and we would have been none the wiser or entertained.

No, don’t go thinking this flick has anything to do with a true story of any description. Almost every implausible movie that gets made, from Zero Dark Thirty to Titanic to Transformers, practically has an opening title assuring us that what we are about to watch is based on true events. That’s not what Life of Pi is aiming for. It aims to tell an amazing, unbelievable story in the most visually stunning manner possible.

And, oh, is it stunning. Seen in 3D, using the full capabilities of this ‘new’ old technique in the cinema is the quintessential cinematic experience. It’s the most impressive and immersive use of 3D I’ve seen thus far, and it doesn’t just add an aesthetic sheen to the visuals: it makes the visuals visceral and encompassing in a way other films don’t.

When Pi is telling the story, he’s an older man, but the story he’s telling is about his younger self (Suraj Sharma), growing up in Pondicherry, at the time a region of India controlled somehow by the French. I say ‘somehow’ because while I don’t dispute that the French controlled this place up until the 50s, it just doesn’t seem like something those brave and noble Gauls would do.

I mean, I can’t imagine the French ever trying to rule some colonial place and having it explode in their and everyone else’s faces, can you? Maybe the Americans came along and politely asked them to leave?

Whatever it was, Pi’s idyllic childhood stems from the fact that he has wonderful rationalist parents, a zoo as his playground run by his father, and an abiding feeling of faith in a greater metaphysical order to the universe, as well as an unearned confidence about his place in it.

It’s every rationalist, secular humanist parent’s nightmare: the day your son comes home and tells you that he’s a Catholic-Hindu-Muslim. What’s the cure for that, more scepticism? Brussel sprouts? A swift clip over the ear and a booting into the Ganges? No, these nice parents believe their way will win out.
What none of them realise is that events will conspire to make Pi even more convinced that there’s some vast presence out there in the universe that both loves and is utterly indifferent to him and every other living thing in existence.

Pi’s father decides the family needs to move to Canada, and plans to sell the zoo’s animals along the way. So they all get on board a big Japanese boat filled with angry animals (like a tiger called Richard Parker, and an orang-utan called Orange Juice), and angry humans (like a loathsome chef played by legendary Russian actor Gerard Depardieu), and start travelling across the Pacific.

The sinking of the Tsimtsum is probably one of the most amazing scenes I’ve ever seen in a cinema, on any screen, probably even in real life. Even beyond the actual sinking, the whole devastating catastrophe is filmed in such a way, or represented in a way that it’s almost like one of those rides you sometimes go on at amusement parks when they simulate some kind of grand, but momentary, journey through tunnels, Jurassic Parks or outer space, simulated with the shuddering of the seat your sitting on.

Well, the cinema didn’t have vibrating seats, mores the pity, but I felt like I was facing the heaving, furious ocean myself, and I was utterly terrified even if I knew Pi and I were both going to survive the wreck.

The point of all this is to get Pi in a life boat, on the ocean, so he can fight for survival and contemplate existence. The problem is, however harrowing the sinking was, Pi’s problems are just beginning.

He’s not alone on the boat. A zebra, a hyena and an orang-utan end up on board. Oh, and some guy called Richard Parker. Richard Parker is testy after his swim. He’s angry, hungry, maybe a bit bored, and, oh yeah, he’s a goddamn Bengal tiger.

Look, I’m the first to admit that this all sounds ludicrous, and I’ve read the book, but the way it all comes together doesn’t allow for a lot of critical thought at first. It’s such a confronting, awe-inspiring visual process that the cynical side of you doesn’t have much of a chance initially to let you hedge your bets.

Of course, as Pi struggles to survive both on and off the boat, in a hideously inhospitable environment, with a hungry tiger never that far away, we get long breaks, and eventually get the time to think, “Jeez, none of this is very plausible, but it does look great, though.”

The captivating, beyond-postcard visuals, beyond hyper-real surreal visuals never let up, and I’m not sure you ever get that comfortable or complacent with them. I don’t doubt that a lot of scumbags will download a cam version of this and watch it on a handheld device or some equally shitty and unhelpful format, and they’ll be doing themselves and the film a disservice. It’s one of the only films I can think of where I can genuinely say, “If you’re going to see it, you have to see it in 3D on the biggest screen you can manage.” It is a cinematic triumph, up there with Lawrence of Arabia and 2001: A Space Odyssey. Maybe even to the point where, had Stanley Kubrik somehow gotten to see this flick, he would have eaten his own beard out of envy at the gorgeous visuals.

Plenty of times I kept saying to myself, “I can’t believe that what I’m seeing isn’t real, that it’s all just computer generated trickery.” It looks so real that you yourself start to feel like you’re the fiction, and Life of Pi is real.

I know this will sound more like empty boosterism and less like reviewing, but Ang Lee made an absolutely sublime picture, visually speaking. He’s a director I’ve always admired, and my admiration has only increased with having watched this. He manages to strike the right balance between getting our jaws to drop and our hearts to ache for Pi’s perilous journey towards survival.

The problem is, and there was always going to be a problem, is that the source material tries to have its cake and eat it too, and it almost totally kills all the investment the earlier parts of the film engendered in me for Pi and his incredible story. Apart from the issues I have with its pantheistic / spiritualistic bullshit that would make a Californian hippy in the middle of chewing on some hemp tofu and striking a yoga pose groan and roll their eyes with how shallow and all-encompassing it is, there’s the central meta-narrative issue that arises once the elder Pi asks the author (and therefore us, the audience) he’s telling his story to, “ultimately, do you want a feel-good story, or the truth?”

Do we, wait, what? Are you kidding me? How do you expect me to care about any of this if you’re going to admit that you’re pandering to what you think ‘I’ really want, because a more formulaic story brings you more success in marketing your story and makes you look like a better storyteller. Well, if you’re a great storyteller, tell your goddamn story, Yann Martel, without having to hedge your goddamn bets and have your cake and eat it too.

Far from making me believe in god, or God, or Gods, which Pi promises at the beginning, it made me believe in our ultimate gullibility as audiences, how desperate we are to wring meaning out of the most meaningless moments in our existence, and how willing we are to pay to be insulted for the honour of it.

Yes, I loved so much of this film, but I feel like a fool for it, even knowing what was coming. I can’t argue with the skill and the artistry involved in this, and I can’t blame Ang Lee or Suraj Sharma, who’s pretty great acting almost entirely on his own for most of the film, for Yann Martel’s shortcomings as a writer and a human being.

8 times I’m only giving this film 8 because it’s so amazing to watch, and not because of the insulting shitty resolution insulting my intelligence out of 10

--
“Richard Parker, come out you have to see this! It's beautiful!” – he’s talking about the gathering storm, not a screening of Life of Pi – Life of Pi