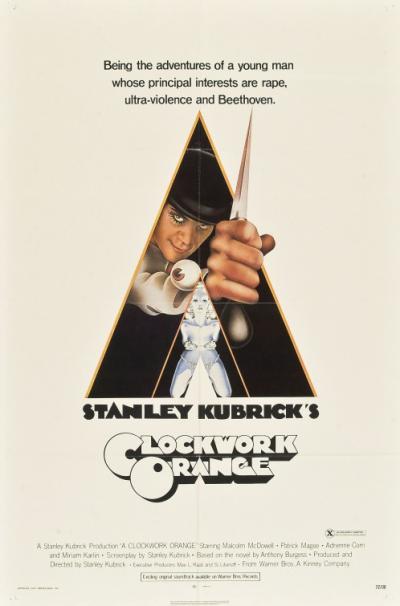 I would say this hasn't aged well, but it seems like it
was wrong from the start

Kubrick routinely is praised as probably the greatest director who ever deigned to pick up a camera and yell at people in order to get them to do what he wanted. Who am I to shit on the great man’s legacy?

Nobody, that’s who. Sure he’s made a stack of good films, and a few bad ones. I will say though, without fear or favour, that A Clockwork Orange is probably the crappiest of his holy, vaunted oeuvre.

A bad Kubrick flick is better than most other director’s best flicks, but it’s still a chore to sit through. And I say this as a fan of the man and his directorial vision. I love many of his films. Hell, I’ve even voluntarily sat through Barry Lyndon a few times and roundly enjoyed it. And I’ve probably seen 2001 more times than the average footy player / actor goes through rehab unsuccessfully.

I first saw A Clockwork Orange back in 1992, on the big screen with a girl who I adored. We saw it at an old movie house called the Valhalla, and were expecting some kind of transgressive masterpiece. She was no shrinking violet to be sure, and had previously watched films with me like Betty Blue, The Company of Strangers and, I’m ashamed to admit, Basic Instinct. Truly was she prepared for anything from the sublime to the ridiculous, from the sacred to the profane. Truly must I say that I was more profoundly bored than even she was.

The only positive that I can remember to the whole A Clockwork Orange experience was that sex eventuated out of it more in spite of its effects rather than because of them. And perversely, for years after we frequented a decent nightclub called Clockwork Orange at the Chevron (back in the days before the owners were jailed for cocaine trafficking and the place was turned into yuppie apartments), which was far more enjoyable than anything this flick has to offer.

Fifteen years have elapsed since then, and since I was on a bit of a Kubrick kick over the last few months, I bought a copy of A Clockwork Orange and decided to sit through it in the privacy of my own lounge room, in the comfy chair with my baby daughter asleep on my chest. Goddamn did I envy her sleep whilst the film played. So much more a productive use of time.