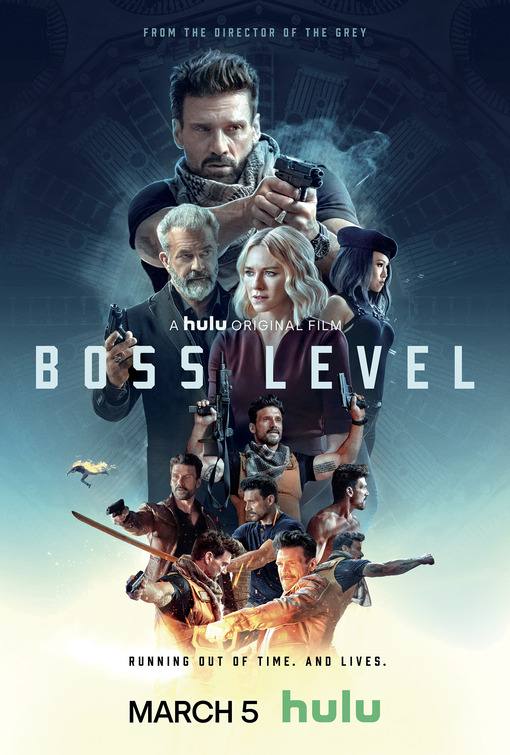 You cannot kill that which refuses to stay dead, like
Mel Gibson's career. Every time you hear someone
blabbering on about 'cancel culture', remind them
that this supreme piece of shit is still get working

Ugh. No-one told me there would be any Mel Gibson in this. Should have checked beforehand.

Nothing good comes from having Gibson in your flicks any more. At least they’ve abandoned trying to “redeem” his heroic image, and just have him playing awful villains, like we now know he is in real life.

No, the hero here is played by Frank Grillo. Grillo looks like some of the guys I went to high school with, crossed with the kinds of guys you see hanging around the front of protein supplement selling places. Also, they’re often smoking when they do that, and, these days, you also see them at the front of anti-lockdown, anti-vacc protests, complaining about what the government is making people put into their bodies.

Grillo usually plays villains in stuff, most recently in the Marvel monstrosities, but even though he looks like the kind of guy who’d fuck your grandmother, they sometimes put him forward as a heroic type.

I don’t buy it. And here he’s the front and centre hero, and we’re meant to believe he wouldn’t punch a baby penguin in the face?

This is the most recent in a long line of Groundhog Day variations, with more of an action / blow-uppy emphasis. There are more variants of Groundhog Day than there are of the coronavirus, and the action ones are something of a Delta variant, one could say. Edge of Tomorrow was probably the best of the action-y ones, but that can’t stop people from trying again and again, unfortunately.

This one not only has a sci-fi explanation for what’s happening, it uses the aesthetics and concepts of ye olde video games as well. For a long while I thought what was actually happening was that a character, being the hero, was realising somehow that he was a character in a video game, repeating the same sequences and facing the same enemies game after game after game. As trite as I thought that was while watching it, when it’s revealed that the character and this artificial seeming, flat yet cartoony world is actually the “real” world, and the generic hero with the square jaw and the generic backstory is meant to be a real person fighting ‘real’ assassins with swords and helicopter gun ships and such I thought “Somehow that feels even more fake”.

Roy’s days are numbered as “attempts”, and they all start at 7am with an assassin’s machete narrowly missing his head. He kills that guy, and then has to survive something with a helicopter, and then goes out into the world, and more people try to kill him, and he searches for meaning.

He survives up to a certain point, dies, and repeats. If he forgets his timing at any stage, he dies early. Doesn’t know what’s going on, doesn’t know how to enquire about his existence or vary things significantly. Or at least that’s what he keeps telling us, because the fucking voiceover narration never fucking ends.

He remembers previous things, or starts sussing out other elements of what might be happening, but of course it’s within the format of a flick where he’s only going to finally solve things with the final playthrough, so to speak. Like all these Groundhog Day ripoffs, the point is generally about a shitty person realising there’s more to life than being shitty, and so they learn all they can about the people around them, learn to be helpful and selfless, and then become enlightened or something.

Roy has to realise that he knows very little about Egyptian mythology, or quantum physics, or sword fighting, and only through mastering those will he be able to kill Colonel Fuckface (Mel Gibson) and his goons.

But that’s only part of it, because, before and during being caught in this tedious loop, Roy was not only a badass, but an alcoholic womanizer. He, like many of us with chiseled features, rock hard abs and steel livers, spends his days and nights drinking and fucking hot blondes (that look horribly similar to some of Trump’s offspring). You see, it wasn’t always like this…

Roy had the love of a good woman (I mean, we are assuming Naomi Watts’ character of the ex-wife is ‘good’, in a personal, moral and ethical sense, but for all we know she could be an even bigger piece of shit than Roy is), and a son, but he pissed it all away, or he has PTSD or something, it’s not entirely clear. But what is clear is that, like every action hero in every action flick now, not only does he have to kill the bad guys, he has to also save the world from imminent destruction AND connect with his son AND win his wife back.

That’s a pretty tall order. There’s a lot to do there, a lot of pinch points, lots of dependencies and time critical actions that have to happen in a precise order for victory to occur. In any case, one of the things he really should have had but doesn’t is figuring out why Naomi Watts is talking with the poshest British accent of anyone I’ve heard since the last speech the Queen gave. How is – why is – how did she end up with a piece of shit like Roy anyway? During some special ops mission at some other supervillain’s hideout where she was working on a machine that could actually suggest what you should watch on Netflix and it somehow ends up being right because of quantum physics? He saves her, they start a family, but she goes back to work when the relationship falls over, and it just so happens to be some other supervillain that Roy has to save her from?

Face it, Roy, she deserves better.

I am a cynical fuck, so sequences of Roy choosing to forget about all the assassins and end of world stuff, and using a bunch of his “attempts” just to bond with his son Joe (Rio Grillo) are treacly as fuck. I guess it helps (it doesn’t) that this is Grillo with his own son, lamenting the time wasted, learning what a wonderful person his child is that he played a very small role in bringing into this world.

They ‘bond’, if that’s the word I’m looking for, over video games. Not modern ones, but retro ones. Roy at first is contemptuous of games as only a 56 year old man who’s never played games in his life but spent the last 30 years drinking and whoring would be, and he’s especially contemptuous of a guy who runs a retro video gaming arcade for being such an incel. Eh, fair enough, the look of the guy didn’t exactly inspire confidence or look like he would be able to get one of those Working With Children certificates from the police. But, really, it feels like a classic “jock” type jerk beating up on nerds like high school hasn’t been over, in Roy’s case, for about 40 years.

But his son is a nerd, so like any decent chap trying to make up for lost decades, he awkwardly tries to play these games, poorly at first to let the son win and feel great about beating someone so much older. Then pride kicks in, and the dad figure doesn’t enjoy the feeling of worthlessness that comes from being beaten by someone a fraction of his age. So he gets better through repetition, and beats him, restoring the natural way of things.

Yet the world ends anyway. If he spends his whole day killing assassins, they kill him anyway. If he spends all day with his son, everyone dies. Even if he kills all the bad guys, the world still ends, and throughout, his ex-wife is dead the whole time, because she’s killed early on in the process. And, bizarrely, even if he kills the assassins AND the head bad guy, someone still goes and murders his son, before presumably the whole worlds ends anyway.

It feels like a premise in search of an interesting plot, and rarely if ever does it achieve that. There are flashes of humour, like a swordswoman calling herself Guan Yin (Selina Lo) who keeps killing Roy and saying the same thing every goddamn time afterwards, no matter what he does. It’s a bit funny.

She is so good that Roy can’t find a way past her, so we see his head get cut off a lot. His only solution is a variation on what Phil Connors does in Groundhog Day when he decides he wants to master the piano: find a good teacher, and skip ahead a little every day. Except in this case Roy finds Hong Kong cinema certified legend Michelle Yeoh to teach him the way of the sword. Presumably they have to do that for 200 or so years for this chump to get that good, but she’s somehow willing and able. It’s a bit of a waste of her talents, but it’s always good to see her.

There’s just that, other than the existential questions rendering everything we see kinda pointless, it never really feels real enough to matter. Plus Grillo, for all his faults or virtues can be charismatic, but doesn’t really achieve that here. He’s not an actor you employee for expressing anything other than contempt or murderous rage, probably. This role perhaps needed someone who could convey something other than boredom and minor irritation. Maybe it needed Paul Giamatti in the role, who knows.

Boss Level does one thing right at least, and that’s have multiple scenes of Mel Gibson getting killed which, you could argue, is what people paid to see. But either there aren’t enough of them, or they didn’t think of a way to make it happen often enough or violently enough to justify my time and their expense.