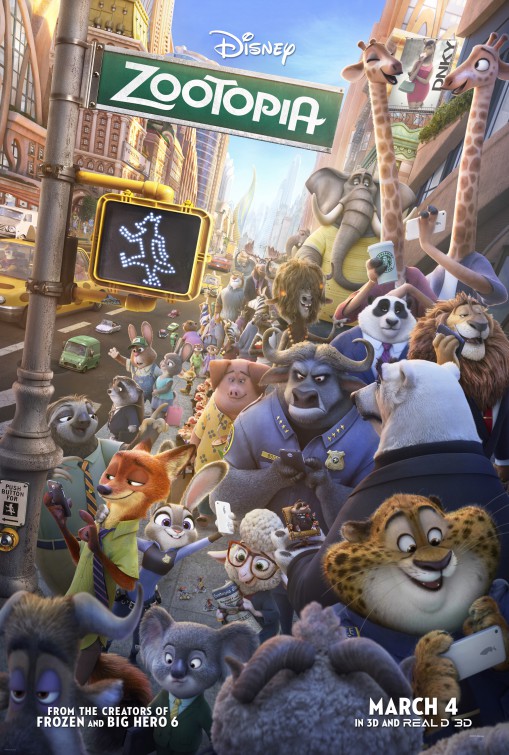 Such a path is fraught with peril. Be too obvious about it, and you risk alienating an audience that doesn’t enjoy being lectured to. Be too subtle about it, and others might think you’re making too light of what is a fundamental problem in human societies, while others don’t see it at all.

At least for me, the ‘problems’ of race are front and centre in the core of this flick. You could argue they’re more like problems of ‘class’ or ‘caste’, or the importance of ‘being yourself’, but come on, really?

The main character is a bunny rabbit (voiced ably by Ginnifer Goodwin) called Judy who wants nothing more than to be a pig. Sorry, I meant a cop. Why a bunny wants to be pork, I’ll never know, but the thing is, though the society of this land seems to be all egalitarian and like the early bits of Animal Farm (ie. post-revolution, pre-crushing totalitarianism), there is a sort of balance of animal interests. Various animals conform to various professions, mostly based on their actual size, but there’s an even bigger social division / elephant in the room, even when there’s an actual elephant in the room: Carnivores versus herbivores, predators versus prey.

For this society to exist, the flick admits it’s hard to accept that they would all happily co-exist together. It’s explicitly stated, though, that once predators volunteered to set aside their hunting ways, the rest became possible. It’s an uneasy truce of sorts, though we don’t really see the tension up from. Mostly, what we see is animals imposing upon themselves and each other the idea that particular species do particular things, and varying from that is pointless and a joke.

The illustration of this is the opposition Judy faces just by mentioning that she wants to be a cop. A nasty fox berates and assaults her as a child for having the temerity to dream, giving her a life long fear of foxes, but she even has her own parents, in perfectly believable parental style, telling her that the most important thing in life is to conform, settle, have no expectations or aspirations, and to not waste time or energy on dreams.

It’s the way they do it, not just parents, but most people in this life. I mean, you can make a decent, reasonable case that the physical requirements of being an American cop (like being able to beat or shoot unarmed suspects unprovoked, accepting bribes, sexually assaulting vulnerable people with the threat of arrest) may make it difficult for her to perform at her best in her chosen profession, but what’s the harm in being supportive, eh? You’ve got nothing to lose, selfish, small minded jerks.

It’s not like having the protagonist of a flick be told not to aspire to something and to have countless other characters telling them to conform is anything new; in fact, it’s practically the story of every character in every flick, animated or otherwise, ever. There is no ‘but’ here. It’s the same plot as almost every other plot. Judy is told she can’t or shouldn’t be a cop because all the other cops are massive herbivores, like bulls, rhinos and the like. She persists anyway, and somehow gets through.

The other massive cops don’t and can’t take her seriously, especially the buffalo police chief (Idris Elba, who, at the moment, is in everything, at least voice-wise), who hates her just for existing. She’s given a task commensurate with her perceived talents, which is the task of being a parking nazi, even though the big ‘case’ going on in the city is the disappearance of a bunch of predators.

‘Predators’ means a lot of different things in this flick. You could try (and probably fail) to make the case that ‘Predators’ represents something like ‘African-Americans’ in the American context, since let’s not pretend Americans make films for any other reason than to reflect back to Americans what Americans like to think about themselves, or any marginalised group. Quite often we hear people stereotyping particular predators, saying that one can’t really expect them to do anything different from what they’re expected to do, because, after all, they’re predators.

Thus, even in this so-called animal utopia, people (animals) are seen as being solely limited by their DNA, in a purely deterministic fashion. It’s reductive, and it’s prejudicial, but hey, it’s efficient.

Even lower on the social scale than bunnies and aardvarks are the foxes, apparently, so you could go further and argue that the foxes are even more likely to be the stand-ins for African Americans, but I won’t, because they don’t go the incredibly obvious route they could have taken by hiring an obvious African American voice actor (Chris Rock, Kevin Hart, James Earl Jones, Omar from The Wire! – any of the usual suspects), and instead went with the blackest of black funk soul brothers, being Jason Bateman.

Even if it’s going to sound like I’m mocking the choice, Bateman is superb as foxy Nick, a crim with a heart of crystal meth and the kindness of Donald Trump all rolled into one. Yes, even his character is a cliché, as the thief forced by circumstance to team up with a cop to solve a mystery and Save the City from the Forces of Doom, but he really forces Judy to confront the fact that the prejudices in society that keep trying to beat her down and discount her, are ones she herself has and exhibits when it comes to Nick and his foxy kind.

She’s not saying it to be mean, she’s not trying to be hurtful, she’s just not even aware that her stereotyping is so lazy, or that she’s even doing it. Her prejudices are so ingrained and so unexamined that she doesn’t even realise they are prejudices – she just thinks of them as stone cold facts.

It’s a gut-wrenching and illuminating moment. It’s a powerful moment in what is meant to be just a colourful and often frenetic bit of kid’s entertainment.

It is no exaggeration for me to argue that this film, in the scheme of things, is no less a monumental document in the civil rights struggle than Uncle Tom’s Cabin by Harriet Beecher Stowe, or Ralph Ellison’s Invisible Man, or the I Have a Dream speech.

Nah, probably not. It is a decent, kid-friendly way to get some of those same elements across, about the gross unfairness and injustice of judging someone solely for what traits are ascribed by an ignorant majority upon a minority it’s convenient to kick around. Yelling “It’s DNA!” doesn’t make it any less inaccurate or unfair.

It also plays into the plot, which gets more complicated as the flick goes on, when it appears that someone, perhaps in the scheme of things considered to be weaker and more put-upon, ends up demonising a group seen as being more powerful, purely for selfish gain. A weak majority using dishonesty and drugs to marginalise a powerful minority? Who ever heard of such a thing?

Yeah, there are lots of gags, lots of film references, ranging from Godfather to Disney’s own junk (the Frozen gag couldn’t be lazier or limper, but hey, the kids don’t care), and even the aforementioned Breaking Bad scene, which is pretty creepy in a kids flick, when you think about it, but as an overall package, it was really quite superb. As predictable as the growing friendship might be between these main characters, a rabbit and a fox, that by rights should hate each other, it was really quite special to see and hear. It was a delight, even.

Zootopia. I loved this cheeky, sometimes cheesy flick, and it has some depth to it, beneath the colours and the movement.

8 times when people hear that Some Lives Matter, they inevitably think But My Life Matters More! out of 10

--
“Ooh, ah, you probably didn't know, but a bunny can call another bunny 'cute', but when other animals do it, that's a little...” – eh, double standards much? - Zootopia