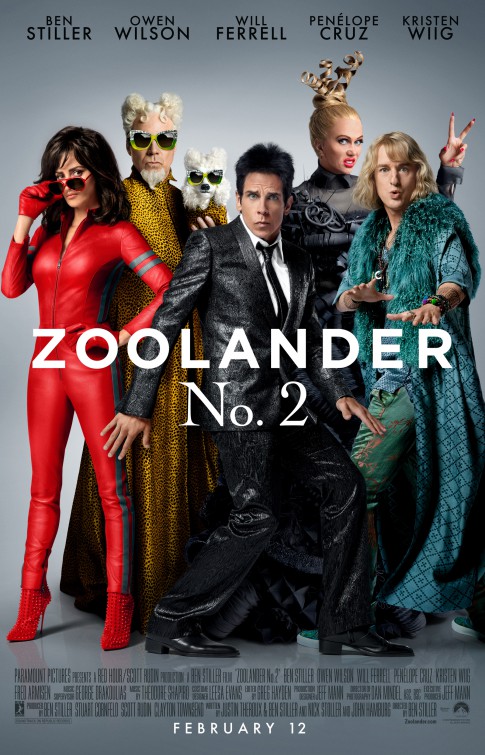 These people are all very dangerously dumb. They shouldn't
be allowed to drive, or vote, or drink, or do anything, really.

Ye gods and little fishes – this movie is fucking terrible! This is like an anti-comedy, in essence almost every scene seems to have been put together to be as deliberately unfunny as the preceding scene, if not more so.

How do you manage to be so unfunny? How do you make it so it isn’t even accidentally funny some times, like, according to the law of averages?

Zoolander 2 doesn’t have far to drop in terms of quality as a sequel, because, in my unhumble opinion, Zoolander itself wasn’t that funny anyway. It wasn’t, I don’t think, as aggressively unfunny as this one, though. Or maybe it seems less unfunny by comparison.

I find it somewhat unfathomable. Ben Stiller has made some very funny movies. I won’t list them all, but even fairly recently, Tropic Thunder was pretty goddamn funny (for my money). I’ve even liked him in more (slightly) dramatic roles like The Secret Life of Walter Mitty. But nothing could prepare me for just how awful I found this.

I laughed once during a nearly two hour film. Well, hour and forty minutes, probably. Break that down further: 100 minutes of a movie, and I laughed for about 1-2 seconds, from one gag. As a ratio, it doesn’t look good in terms of return on investment of my precious time, does it?

You could argue that a movie as great as Zoolander didn’t need a sequel, but maybe the people involved are wiser than you. Somehow, somewhy they decided to start this mess again, set it a certain amount of time after the original, with nothing new or funny to say with its limp arrows fired at targets as wide and unmissable as barn doors, yet still misses them anyway.

Mocking the absurdity of the fashion industry is pretty easy. Everyone does it. It's like mocking the cast of a reality program like those terrible people from Jersey Shore. Remember them? It took me a while to remember the name of the goddamn show. It's nice that they've receded into the oblivion they so richly deserve until they force their way back into our consciousness again when they inevitably get arrested for various crimes against humanity.

Also, the dumbness of models is a trope so lazy and so dated it's kind of like mocking dinosaurs for being extinct. Stiller and Wilson mined what little ore there was to mine from that shallow vein back in the day, and the opportunity to reprise these roles should have raised little more than a collective shoulder shrug with them (the way it did with the audience, who avoided this sequel in droves). Instead, here they are with these terrible characters, again, for some reasons.

Not that I watched the whole thing, but what this most reminds me of is the equally unnecessary and equally unwarranted sequel to Dumb and Dumber that came out last year. Fairly successful actors reprising roles where they play complete morons in unfunny scenarios seems like a licence to waste money, and waste money and time they did. Though I'm sure the actors themselves were happy to cash their cheques.

They should be ashamed. This terrible movie picks up a decade and a half after the shenanigans of the first. Derek Zoolander has been living as a recluse in the extreme frozen north of New Jersey, or as a 'hermit crab', to hear him tell it, and has survived despite the fact that he has always been consistently shown to be so incredibly stupid that continuing to breath unaided seems impossible, let alone survive living off the land.

Someone kills Justin Bieber in Rome, and you'd think that's a great way to start any movie, but as much as nations rejoice at the thought, the flick doesn't do much with it. Someone is killing some fairly famous people, and I guess it's meant to be a bad thing, but it's hard to tell. All of this seems to be happening because someone wants to draw Zoolander out of hiding for... reasons. Stupid reasons, but stupid reasons are okay if they result in hilarity down the track.

None of the set up here even comes close to being funny or engaging. Penelope Cruz is always welcome in any film she appears in, because regardless of whether she's treated like the next version of Sophia Loren, she can act quite fine when she needs to, but the flick doesn't have much for her to do in this movie other than act like someone only slightly less dumb than Zoolander and co., and to propel a leaden plot that stinks of DaVinci Code type nonsense, and to squish around her boobs. I'm not trying to say that in a sexist or derogatory fashion, in that I mean this stupid screenplay demands that she spends a certain amount of time actually squishing her boobs around.

Look, honestly, if the movie had been two hours of that, it would have been way the better for it. Certainly would have been more enjoyable. I mean, I could understand getting bored of it after maybe the first hour, but, really, there would have been a heap more entertainment value in that compared to what we actually get.

Her trumpeting of the quality and squishiness of her boobs lead to the only time I laughed during this whole shemozzle, which is when viewing her put their squishiness on display has a somewhat predictable effect on the inert genitalia of one of the two male models. I reckon it was Zoolander himself; my partner is certain it was Owen Wilson’s dreary character – there ain’t no way I’m watching it again to find out.

Like an erection from either of these two morons, it doesn’t amount to much, and it doesn’t last very long either.

Zoolander is trying to find the son he lost because… Child Protective Services rightly took the child away from a complete moron that probably would have ended up selling the child for hair product or cocaine or something equally necessary. For whatever reasons, the child somehow ended up in Rome… so…

Bleh. It was all terrible, nothing redeeming it, nothing to recommend it, nothing to enjoy, nothing to quote, nothing to celebrate other than its ending, in that I celebrated the fact that it was over. The ones who come off the worst are the fashion elite (Anna Wintour, Tommy Hilfiger, some other jerks) playing themselves at the end, who are even worse (somehow) and uninspired that the leads.

No, I can’t go on. This isn’t even terrible in a way where I can gleefully eviscerate it. It should never have been made, and the world would have been a better place had it never come about. Now, because of this film, we who have seen it are a little bit dumber for our troubles, and a lot more likely to drown accidentally in the bath tub because we’ve forgotten how they work.

--
“Do you ever have feeling, where you see young teenage girl with perfect skin, and you want to kill her? And take her skin, and put it on your skin? We've bottled that feeling.” – you and every other skin cream company, darling – Zoolander 2