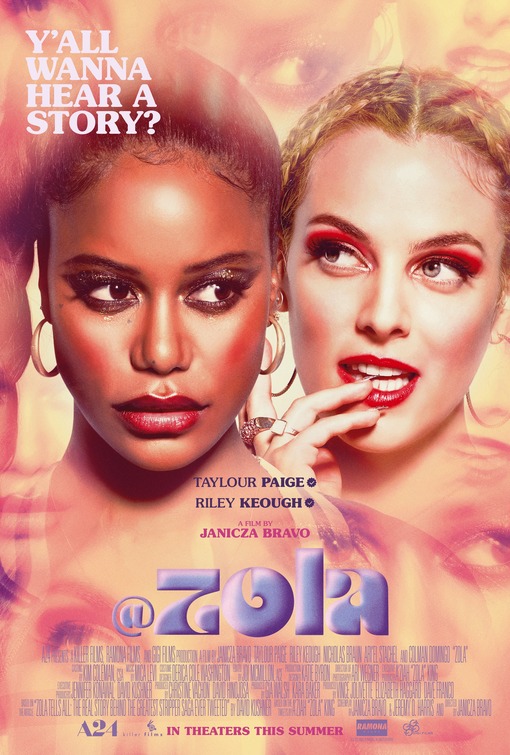 I regret saying yes now too

I think Zola could be the most stressful film I’ve watched all year. I’m not that keen on stressful movies at the moment, and had I known I probably wouldn’t have submitted myself to this kind of scuzzy rollercoaster ride through what could be the dumbest state in all of the US.

But I guess it has other virtues, too.

You haven’t seen many films based on a string of 148 tweets, but if you have, here is another one. The point of this story is that a woman had a terrible experience trusting some dingbats, and this is the story that unfolded. She at least lived to tweet about the ordeal, some others weren’t as lucky.

Taylour Paige stars as the Zola of the title. Instead of playing French writer Emil Zola, author of classic novel Germinal outlining the misery of poor coal miners and their miserable families, she instead plays a waitress who is befriended by someone she possibly shouldn’t have befriended. Stefani (Riley Keough) is a white sex worker chaperoned around by her pimp X (Colman Domingo), whose technique in bringing Zola into their orbit consists of calling her “bitch” affectionately at either the beginning of or end of each sentence that she speaks. For lack of a better descriptor, Stefani talks “black”, and somehow that isn’t a red flag to Zola, who’s African-American.

Almost everything Zola says, either out loud or in voice over narration to us, is taken from the tweet storm originally birthed out into the world back in 2015. Paige delivers all this truncated dialogue with minimum inflection and maximum venom.

She has been friends with Stefani for about a day before she is lured into travelling a long way to Florida from Detroit. I don’t know heaps about US geography, but I know enough to know that Detroit is in Michigan, and borders Canada, and Florida is at the other end of the map, dangling its way into the Gulf of Mexico. That’s a long-arsed car ride.

What’s worse is that, as sketchy as this all seems, and as mistrustful as Zola seems right from the start, none of that stops her from getting sucked into a maelstrom of bad decisions and worse intentions. Nominally it’s about earning some money, making bank, but Zola doesn’t even seem to be that interested in that.

Some of us, in our youth, have experiences that we had with people we barely knew but thought we connected with, people you’ve met at a bar or club or night out. Substances might have been involved. Anyway, against your better judgement, you find yourself on the other side of town in a car full of people you know nothing about, and you might have that moment like “what the fuck am I doing here?”, and that can be before the driver hits 200km per hour or someone drops a gun out of the sunroof and before the cops get involved.

Zola is all about that kind of energy, except extended over a weekend, with a person feeling trapped with a bunch of sketchy people they don’t know, doing incredibly seedy stuff but just wanting to go home. It is not a comedy caper. Hijinks don’t ensue in a comical fashion. I mean, there are aspects that are humorous, but mostly we probably just want it to be over as much as Zola does.

I mean, it’s nasty as fuck. Stefani convinces Zola to come down to Florida with her so they can make a bunch of money stripping, but you’d have to be beyond gullible to believe such a thing. The plan is, as dictated by Stefani’s pimp X, to compel both women to fuck strangers for money through some app called Backpage.

I don’t know how much or how little pimps usually value human life, or women, or a woman’s time and bodily integrity, but he initially puts up an ad that says weird men can bang these ladies for an hour at $100 a pop. Zola has no intention of hooking, but this appears to be Stefani’s destiny, and she fucks oodles of strangers with barely a change of expression.

Zola, trapped in the room for some reason, spends most of her time staring at a wall, but then she makes her snap decision that Stefani could be charging way more, like $500 a pop, for fifteen minutes at a time. She also changes the Backpage ad, with a photo portraying less like Britney Spears now, and more like Britney Spears twenty years ago.

Even more men turn up, and Stefani services them all.

The strangest thing is that, in the car drive from Michigan to Florida, there was a fourth person in the car, being Stefani’s boyfriend Derrek (Nicholas Braun), who, for most of the movie, doesn’t know what’s going on. Why Stefani would bring her dumb boyfriend, when she intended to spend the weekend fucking strangers for money, is never explained, except that maybe love does exist in this cruel universe.

Derrek, who is painfully dumb, at least is not cruel. X is a cruel piece of shit, and is not over threatening anyone and everyone when he feels like it. The character, when angry, reverts to some kind of African accent. Zola seems legit terrified of him, but she’s just counting the moments until she can get home.

I really don’t get where Stefani is coming from. She appropriates African-American mannerisms and pretends to have some kind of camaraderie with Zola, but happily treats her with racist contempt. She has no trouble with having sex with countless men, even worse stuff than that, but doesn’t even really seem that interested in the money itself. She routinely tells Derrek that her heart belongs to him, but, when the pimp lists her body parts, presumably ones valued by customers, she assures him that he owns those.

The performance is great, don’t get me wrong, it’s just that there feels like this absence rather than presence there.

If this is all based on an epic Twitter screed, which it is, you might wonder where Stefani’s right of reply is, and Riley Keough gets to deliver it, in the form of a statement put out on reddit, naturally, where Stefani, or at least the woman Stefani is based on, rants about how everything Zola said was a lie and plus Zola didn’t make any money that weekend because no-one found her attractive and she didn’t even make a dollar.

That’s quite the defence, that is. I felt kind of unwell and unhappy the longer this went on, and all I wanted was for the ordeal to be over. And I didn’t really want anyone to die or be hurt, but not everyone is spared, in the end. Derrek, being the fuckwit that he is, is befriended by someone with tattoos on his forehead. No matter how friendly, anyone with a shred of street smarts would think twice about telling a complete stranger about how much money your girlfriend is making for her pimp.

When Stefani makes a house call to the wrong room, as in, it’s the right room, but the people in the room are there to rob her and her ‘friends’, the film goes from just being sketchy and skeezy and gross to being life and death, and, honestly, by this point I would have been happy for all of the male characters to die, and for the two women to drive off in the Mercedes and never look back. The reality is much sadder, and dumber than that.

If the point of the story is meant to be that we want Zola to survive, and that she does, since she got to tell the story on Twitter, well, then, Mission Accomplished? I’m not sure how illuminating it is otherwise, but maybe it didn’t need to be. The lead performance needs to do a lot at first, ie, a lot of stripper pole dancing and twerking and such, but when the weekend gets uglier, all that’s required of Zola is to look pissed-off and seething, and just over it, and that gets tiring after a while as well.

This was a sober Thursday night viewing for me, and maybe had I been on the beers or some performance enhancing drugs I would have been in a keener place, but as it stands I’m glad that Zola survived, but I’m not sure why the story really needed to be told. Worse happens every day, in Florida, hell, in Melbourne, even, but they don’t all make for compelling movies.

6 times I’ve had worse weekends, though not many, out of 10

--
“You wanna hear a story about how me and this bitch here fell out? It's kinda long, but it's full of suspense.” - Zola