You Won't Be Alone 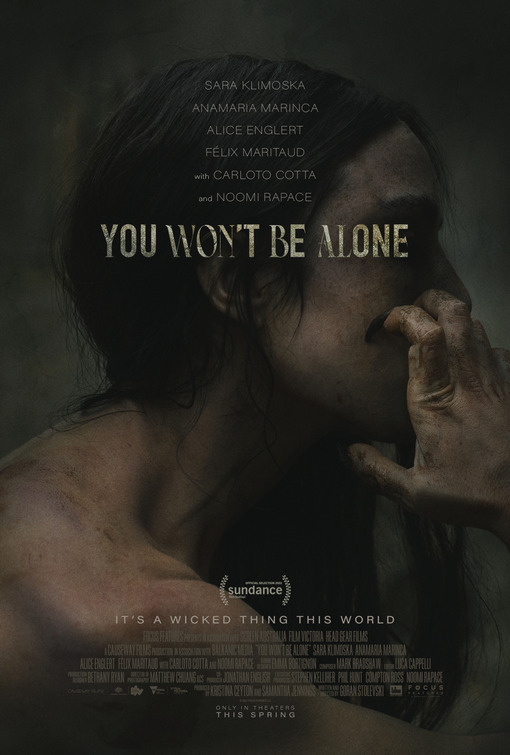 But maybe, I dunno, maybe you should be?

Such a title, a phrase, like “you won’t be alone”, it can sound like reassurance, like trying to comfort someone who’s afraid of abandonment, of loneliness, that they won’t be as alone as they fear.

It also, unfortunately, sounds like a promise that’s more of a dark threat: You won’t be alone because I’ll always be around, making sure nothing goes right in your life, and that every time you get close to people, I’ll be there to snuff them out.

It is referred to as a horror film, but “horror” doesn’t really capture what this flick is about. It’s not trying to horrify or scare audiences. Horrible things do happen, but the horror isn’t the point.

In weird ways this is more like a micro-budget Terrence Malick flick with 1 per cent of the budget and 200 per cent of the ambition. There’s a lot told to us in whispered voiceover, because the main character cannot speak for herself. She never speaks for herself out loud, regardless of what form she’s in.

Even though I push back on the genre designation of “horror” in order to avoid pigeon-holing the flick, everything I’m going to write now is going to contradict that assertion.

In some non-descript peasant village in what these days is called Macedonia, but about 200 years ago was part of the remnants of the Ottoman Empire, a young peasant mother is confronted by a strange sight: a blistered, tormented figure who wants to drink her crying newborn’s blood. This is a monster out of local myth, appearing to this woman, for reals, and all she can think to do is bargain for her child’s life.

This monster, though, who is known by one derisive name (Old Maid Maria), and one descriptor (Wolf-Eateress), sounds like she’s going to be bound by some kind of Rumpelstiltskin-type bullshit, but she really isn’t. And though she agrees to spare the child until she is 16, she commits the first of many horrors by stealing the girl’s voice. Permanently.

The mother, not being very bright, thinks to protect this child by shutting it in a cave, where it pretty much seems to grow alone, neglected, unloved and unmissed by anyone.

Voiceless, without love, without contact, without any knowledge of the peasant world, such as it is, outside.

Nevena (Selena Klimoska) is completely feral and astounded by everything. Such that when an eagle appears out of nowhere, it’s as shocking to her as anything else that happens.

The eagle is not really an eagle, but when Nevena’s mother appears, tries to shoo it away, and briefly disappears, then reappears, we know what Nevena doesn’t: that someone is wearing her mother’s appearance like a mask, if only briefly, and that it’s really Maria.

Maria, what we would call a witch, is a vengeful, callous soul, who shapeshifts at will after killing people and taking their innards, and inserting them into herself. Lucky Nevena has also been blessed with this ability by Maria, because what Old Maria Maid wanted more than anything else in life, and now in whatever state she dwells in, was a child, someone to be like her. But she is disappointed in, disgusted by Nevena and her simplicity. Though they’re meant to be sustained by blood, Nevena doesn’t like it, doesn’t seek it, and prefers day old bread instead. And her approach to nature is more in wonderment than sadism, and Maria don’t like that neither.

It does not come as much of a shock that Maria abandons Nevena out of some kind of frustration, but what she really doesn’t want is for Nevena to think that if she doesn’t live a bloody and murderous life that she’ll somehow be happy amongst the humans.

Nevena doesn’t know anything about them, but is drawn to them, and they are drawn to her. She eventually, not deliberately, but accidentally, kills a young mother and assumes her place in a village. So everyone thinks she is Bosilka (Swedish superstar Noomi Rapace), but that the reason she seems simple minded and can’t speak is because of her husband’s relentless brutality.

This whole sequence – it’s less about supernatural horrors, and more about the horrors women have faced since time immemorial, that so much of their existence and happiness has depended on men not being shitbag monsters themselves, and almost always being unable to achieve even that.

Her mother-in-law empathises and tries to comfort her, having been subject to it her whole life as well, but none of the women can protect each other or themselves from these fucking men.

They have their ways to minimise their exposure. They should not even be in the same rooms together, and they don’t dine together, oh no, men first, of course.

Nevena/Bolsilka is trying to mimic human behavior, human expressions, trying to fit in, but at best she is observed with pity, at worst with open hostility. Her husband especially cannot stand to be reminded of what others think he has done.

That of course doesn’t stop him from forcing himself on her, and yet again Nevana kills without intending to.

She sheds her form, and takes on that of a dog, just to see what that’s like.

These peasants, these fucking peasants; they’re kinder to dogs than they are to women.

If Nevena is to learn what life is like for people, well, surely she needs to see what it’s like for men?

One guy sees her naked out and about and thinks “Great! I’m sure there’s nothing suspicious about a young naked woman wanting to have sex with me out of the blue”.

So he’s dead really quickly, but Nevena takes his place as Boris (Carloto Cotta) in the village. Though the other peasants know something is wrong with him (throughout these transformations, Nevena still can’t speak), because he’s a guy, everything’s still okay for him, so even if he stumbles around like a dickhead, people are generally okay with him. It is through him, and through his wife jumping his bones that Nevena discovers that sex can actually be quite enjoyable; especially for guys; especially when it’s consensual.

If there is one constant in the universe, it’s change, and if there’s one constant for a shapeshifter, it would be the need to change your form before peasants figure out what you are and try to burn you to death.

Whenever Nevena is living her life, minding her own business, learning to be human whether as a man or a woman, Maria turns up, randomly doing annoying stuff, always with the intention of imparting to her that comfort and safety is not possible for their kind.

It’s not really a convincing argument. Maria’s argument is less that Nevena won’t be able to find happiness in this cruel world, and more that Maria won’t allow Nevena to be happy in this world. And she intends to make good on that promise.

We see Maria’s origins, we see how she becomes what she becomes, and though it explains it, it doesn’t make her more of a sympathetic character.

The eternal conflict, between mothers and daughters, between the monsters who kidnap girls and try to imprison them forever or transform them into monsters as well, these are all the stuff of dark fairy tales and horror stories. But they have to point to something within people, a hunger that sometimes can’t be satisfied, that can turn into something monstrous, or turn back into something more embracing, given enough time and kindness.

There is so little going on in this flick, and so much simultaneously. It’s filmed in such a close-up way, with almost claustrophobic framing, that we don’t get to have a distance from what’s going on. I think we too are meant to feel like we’re literally stepping into other people’s shoes like Nevena is. Does the film make the argument that getting to experience life as other people experience it can make us better people, or at least more human? I have no idea! It seems credible, though. This flick does not overburden the audience with exposition, of that you can be sure. The whispery voiceover isn’t explaining anything, isn’t underlining themes and points, or this exhausting peasant world, it’s just letting us into the minds of people who aren’t that articulate, really, but they definitely feel stuff.

The last sequence covers the greatest length of time, where Nevena has taken another form, that of a child who died through accident, but she gets to live as this young girl, and be loved by her family, and grow into a woman, and grow to love another boy she grows up alongside. It’s such a beautiful part of the film. It's such a beautiful articulation of nature being great and all, but nurture can be so much more helpful.

It’s so beautiful that you know Maria will come along to destroy everything.

This is a complicated, somewhat obtuse movie, but it’s pretty grand in its own way. I cannot imagine how the Australian - Macedonian Goran director Stolevski convinced people to give him money to make it. I can’t imagine the audience for this (beyond myself, of course), but there seems to be some audience for these kinds of no-budget, witches are real but they’re pretty awful slim sub-sub-sub genre. Maybe it falls into a similar wheelhouse like Robert Eggers The Witch or even another recent flick I saw called Hellbender, but this one at least seems to have far more of a humanistic bent to it, with less of an emphasis on the supernatural, and more on the transformative power of connection and, dare I say it, love?

You Won’t Be Alone. It’s pretty great, and baffling at the same time, and that’s okay.