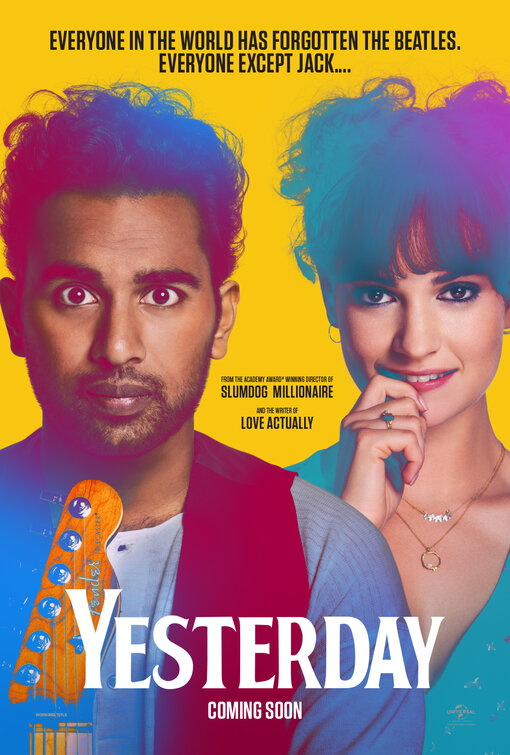 I'm shocked too that they couldn't do more with the idea

Danny Boyle has made some surprising flicks in his day, but this has to be one of the most surprising, mostly because it’s such a tame grandmother-pleasing flick from the guy that once made Trainspotting.

Of course he also made Trainspotting 2, but that wasn’t surprising, just depressing. In terms of crowd pleasing fare, this is probably closest to something like Billions (not the series, a movie about a boy who finds a bag full of cash), which was as G rated a film as humanly possible by someone renowned for so, so much filth.

This has a novel premise, but one so fundamentally out there, that you wonder if it resulted among a group of people who were smoking dope together, so impressed were they with this brilliant idea. However, before they could pool their enhanced inspiration together and come up with a plot and an ending, they sobered up, ran out of substances, and were left cold, sad and a little bit hungry.

Maybe it’s a great premise. I don’t know. It’s such a ridiculous premise that the fact they don’t do much with it doesn’t really register until the very end where you wonder how it all got this far without someone saying “Hang on a second – we didn’t give the film a point!”

It’s a stealth way of doing a biopic without the messiness and cost of having to get the consent of the various real people or their estates involved, or having to wrangle the egos of famous-ish people playing people even more famous than themselves. There were scenes in this which were pretty much identical to stuff from Rocketman, the Elton John biopic, where someone sits at a piano and belts out a song as everyone stands around them in awe, and you think “that’s nice, but” because, really, they’re just covers.

Covers of songs that are familiar, well known or beloved by many. Obviously, the original is the preferred version. A decent cover can sometimes be nice, but they’re generally superfluous. A transformative cover sometimes unearths a completely different way of experiencing something we thought we knew, revealed to us in a wholly different form.

Most often the best they can do is get us to remember the past.

This flick hinges on the premise that what if something happened, like, a giant purple dude with a gaudy glove covered in gems snapped his fingers, but instead of wiping out half the life in the universe, he decided to erase the existence of The Beatles from everyone’s minds like they never existed.

But. There’s one guy who remembers most of their songs. What do you think would happen then?

No explanation is given for what happens. There’s a blackout, Jack (Himesh Patel) is riding home on his bike, after deciding his music career is going nowhere, all the lights around the world go out, he is struck by a bus, and, when he wakes up, fundamental changes have occurred to human history.

And we never find out why. Well, the only reason why is to give Jack multiple chances to fuck things up with the people around him AND destroy the legacy of the Beatles.

I would argue that it’s such an over-the-top premise that it makes it almost impossible to craft a believable film around it. The central issue in the flick is ultimately meant to be whether Jack and Ellie (Lily James) end up together, or at least that’s the main thing we’re meant to be worried about. But amidst all this is Jack putting out Beatles songs into a world that didn’t know how much it was missing them.

If you love The Beatles, then the idea that all their songs are almost magically timeless would sit well with you. And as such, you would find the idea that songs written and released into the world 55 years ago in our reality would, in this film’s reality, result in the world collectively losing its mind, because the songs are just that good.

If you’re a tad more cynical you could perhaps think that while many of their songs were amazing, they were produced in a time and place that was ready for them, receptive even, and that releasing a lot of those songs now in a landscape where thousands of songs are released every week would probably be…futile.

When Jack figures out that somehow the Beatles have now never existed, but he still remembers their songs, he figures if he starts playing their songs, maybe he’ll get the success that he always craved. And the world agrees. Ed Sheeran himself hears his great songs, and brings Jack on tour with him. Ed Sheeran, it has to be said, is not very convincing as Ed Sheeran, which means a dual career in movies as well should not be part of his plan.

Despite having willingly brought Jack on tour with him, without anyone pointing a gun at his head, Ed seems to resent Jack and his ability to seemingly come up with new songs on the spot. I mean, we know Jack is just passing off Beatles songs as freshly written stuff, but Ed, poor Ed, he’s gutted.

In perhaps the strangest conflict I’ve ever seen represented in any movie ever, Ed challenges Jack to write a song from scratch in 10 minutes. Ed plays his bland wandering noodle of a song, and then Jack, on a piano, plays The Long and Winding Road. Everyone listens in, an awed hush falls over the crowd.

If we believe all the songs the Beatles came up with are great, well, this film agrees, but the proof of that is only when Jack plays their music, and people go berserk for it. We’re not really given any other reasons as to why the Beatles songs are so great, they’re just great. It’s a given. They are so great that in a world where they never existed, they would have to spring forth as if by spontaneous generation, and the world would always be crying out for them, desperately needing them.

It's a bit naff, as ideas go. Jack goes out of his way to be unlikeable for at least the first half of the film, as if to say “Beatles songs are so great that they could make a charmless jerk like me a worldwide sensation within a week”, but it’s enough to bring him to the attention of the piranhas that work in the music industry. On Saturday Night Live Kate McKinnon has played evil characters from Satan to Rudy Giuliani and worse, but her manager character here is somehow even more evil. She has this general dismissiveness combined with a smiling viciousness that convinces me she is not someone you should cross, or meet in a dark alley, or go halves in a pizza with. She would find a way to screw you over not just for more money, but just because she enjoys it.

The label does the thing it does to all artists, which is to shove them into whatever hole they can be molded into. And Jack, understandably, starts to have misgivings.

The marketing for his upcoming album emphasises one thing above all else: he came up with all the songs, no-one else. One man, one singular being came up with everything. So they will praise his singular genius, and all the while he’ll know he’s just aping the music of genuinely talented people.

And yet, at the edges, one hulking Russian dude and one middle-aged lady seemingly know something about the Beatles too, and they’re threatening, somehow, to derail Jack’s plans for world domination.

Also, in the rush to become bigger than Jesus / Allah / Benedict Cumberbatch, Ellie gets somehow thrown to the side because the story needs her to no longer be the supportive best friend / unrequited love, but a form of antagonist the likes of which the film never needed. I understand that with such a fantastical premise there needed to be something like real stakes, as in, will Jack go off and become the biggest star in music history, or will he throw it all away because of someone he didn’t even think of romantically until so late in the film? Don’t get me wrong, Lily James is a wonderful actor who can do plenty with thankless roles, but the character she plays here is not well served by this story.

There are a lot of other problems one could point out, but I guess in the end, it doesn’t really matter. There is a great scene towards the end of the film which could not have occurred in any other way than in a film with this weird premise, and it was a genuinely moving scene in a movie that did not have many of them.

At the end, though, I found myself thinking “Really? That’s it? All of that for so little?” Unlike a standard biopic, there isn’t the need to run through the famous moments in a performer or a band’s history. But just like a biopic, like, the worst moments of most biopics, random people say the titles of Beatles songs and we’re meant to not groan with the ultimate unfairness of it all. Every time I hear someone say something like “In this bit, the guitar should be gently weeping” or “you’ll get by with a little help from your friends” I die a little inside. It’s just…I don’t like it.

It's lazier than puns.

It’s almost okay, though. I mean, I guess The Beatles are fundamental to popular music of the last half century, and it’s okay to celebrate some of their songs in a gentle, harmless fashion that won’t scare the oldies. And I don’t know if they really could have done more with this aimless premise, because honestly, it's a premise in search of a point that it never finds.

6 times the great thing about this alternate reality is that, with no Beatles, Oasis never existed either out of 10

--
“Wow, this is the most complicated joke I've ever heard.” – yeah, and there isn’t even a decent punchline - Yesterday