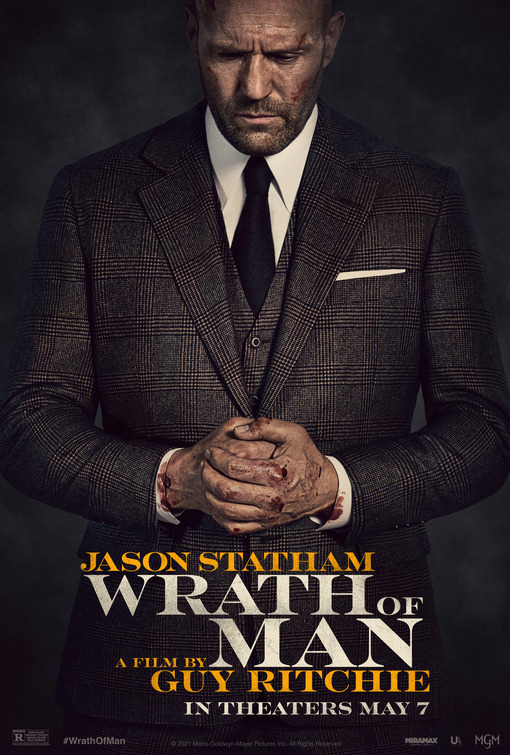 What happened to you, Guy Ritchie? You used to be fun, man.

The chap who made Lock Stock and Two Smoking Barrels and Snatch has gone too far in some other direction in order to want to still make fun films. He’s made massive budget Disney flicks and other crap, so me hoping, yearning for something fleet and funny like Lock Stock is a fool’s pipe dream.

The Gentlemen from last year was not entirely my cup of tea, but it did strike many viewers as a return to charming form (bleurgh). This film, though, is not like that at all.

This flick does not fuck around. Though a long film, it does not even have time for having the definite article “the” in its title. So it’s not even “The Wrath of Man”, it’s the somewhat ejaculatory and abusive “WRATH of MAN”. You can maybe even, as an Australian, imagine a few curse words after it, as in “what movie did ya watch last night?” – “Wrath of Man, ya fucken dickhead”.

I don’t really imagine that that’s what conversations are like on construction worksites, because I’ve spent a fair bit of time on construction sites, and the guys are mostly talking about Married at First Sight or The Bachelor or how one of their co-workers was recently crippled and unable to work and didn’t get any help from their employer because they lied to WorkCover, that sort of thing.

But they have a strong union, so maybe that will help. Wrath of Man is also a movie set at a very blokey workplace, where men test each other’s masculinity constantly and threaten each other with vague and specific threats of sexual assault. You know, like most male dominated workplaces.

But that only persists for what must look like the strangest new starter / induction video ever filmed about someone starting a job with a new employer.

A man so stern that he would make the Easter Island statues cry if he just glared at them for too long, starts a new job. They call him “H”, as in “haitch”. But he’s played by Jason Statham, so… H does the absolute bare minimum communication-wise to let people think he’s a normal person. He has to do shooting tests and driving tests, and it’s clear he’s making sure they don’t know how awesome he would really be at these things if he was doing them for reals, so he just sneaks through.

This is for an armoured truck security firm, you know, those absolute fuckheads too fucking stupid to even be security guards at a mall. I’ve had work interactions with them and their supervisors, and let me tell you, generalisations and stereotypes are unfair at the best of times, but these fuckheads take the cake. They are often steroided-up soldier of fortune types that feel they’re on a par with military types and it rarely if ever goes well for anyone involved. I’ve seen one of these jerks push over an ancient pensioner who got too close at a Myki-travel card machine because the fuckhead thought the woman was going to somehow attack and steal the coins they were taking out of the machines, and menacingly kept his hand on his holstered gun like if she gave him shit, he was going to finish the job.

What’s that, you say? What was I doing when this happened? Did I just stand back and do nothing, making me morally complicit in the outrage that unfolded? I did not simply stand back, I’ll have you know. I was sitting, on a bench, so…somehow that minimises my moral culpability?

I know, I know – I again failed one of life’s tests. Anyway, the guys here are even worse. Fortico is the name of the company, and it’s all guys except for one woman (Niamh Algar), so you know she’s only there so that H can have sex with her at some point, in case we wondered where his preferences lay.

H expresses nothing except the general hostility men are expected to express towards each other in a suitably toxic male environment. Even then, he seems unusually controlled, so much so that even the other people who don’t know him at all suspect that something else might be at play.

One chap refers to him as a dark spirit with history, and yet they ignore all the signs, even at a place of work where you would think they’d be worried about this kind of thing, because how else is it meant to chug along?

He, being H, is searching for something within the company, something to do with an armed robbery of one of the company’s vans several months ago, one which led to the death of a civilian as well. Every time mention is made of that robbery, H reacts, but not in a way where he says something or expresses something: this burst of emotion mostly looks like the mildest case of indigestion suffered by someone who has steel guts anyway.

H expresses nothing verbally, ever. I don’t mean that he doesn’t talk. He uses the same tone of cold fury for every interaction, whether he’s ordering takeaway or threatening to murder someone’s girlfriend.

I imagine a lot of things. I have an active imagination. I imagine, with no actual other supporting evidence, that the flick is saying something about men. I don’t, because of the people involved, imagine that it’s saying men not feeling comfortable expressing their emotions is toxic and leads to harm, not only to themselves but to the people around them as well.

What I imagine the flick is saying is this: you women think men are unemotional and uncommunicative slabs of concrete, but the truth is men can have bottomless wells of emotion within them: it’s just better if they control their emotions and kill a whole bunch of people, rather than talk about their feelings with someone close to them.

It’s the only way to get revenge.

As is standard in a Guy Ritchie flick, there are scant roles for women. But the most important is the ex-wife of H’s character, during one of the innumerable flashbacks, after they have suffered a horrible tragedy, after H himself was shot and nearly died, and what she says to him that he doesn’t respond to (thus supporting my bullshit theory in the preceding paragraph).

She attacks him, quite rightly, for being responsible entirely for something that happened to someone they both cared about. He sits there, saying very little and expressing even less.

She ends with “And still you have nothing to say. You are a cold, cold cunt.”

Wow, harsh words. What follows is meant to be his answer to that, in that even if he didn’t cry or say the right words, his actions are meant to speak louder than those petty, weak, emasculating things. This is called Wrath of Man, after all, pure wrath, nothing extraneous.

In a different flick you’d think they’re commenting on it, or taking the piss out of the idea. This flick is solidly committed to being cold, cold as the grave, absolutely forthright in its desire to stick true to its dedicated path. H wants pure vengeance, not justice. He kills stacks upon stacks of people, but the architecture of this world somehow adapts to his needs. Powerful, dedicated men who do not waver shape the world to their desires, but only if they maintain their cold rage.

In some ways, this is the most straight-ahead and remorseless flick Ritchie has ever made. It hardly exists in a true crime or realistic context, since the main character seems to have the green light / carte blanche to kill whoever he wants as long as they’re bad guys from the FBI itself (as personified by Andy Garcia as Agent King, no less), but the flick definitely does not fuck around or try to make anyone or anything sympathetic. Almost everyone in this flick is compromised or ‘bad’ except for the non-criminal victims of their crime-life, but there are no excuses made for them. The bad will be punished, eventually, by the even worse, because vengeance must be had.

The honest truth is that usually this kind of macho bullshit bores the fuck out of me unless the violence is particularly artful, because I’ve seen and read enough over the years to know how toxic this mentality is, and how pervasive, and how self-reinforcing, especially for men struggling with how to be men in this world without killing themselves or each other.

The violence here is not particularly artful, but the flick stays so committed to its bleak view of the world that, honestly, I was dragged along with its momentum, and not unwillingly. This is a world of men who can only define themselves through money and violence, and the pretences of family and romantic love are only a façade which they happily cast aside when it suits them.

When the “last” or “real” set of villains is revealed, and their backstory is told, it reinforces this idea with even more emphasis than before. That the ‘evil’ crew who started this cycle of violence and vengeance are actually war veterans bored by their families and working 9-5 for a living is even colder than the murders and executions that preceded it. Even amongst them, vets who still think of themselves as honourable men despite their activities, there is a psychopath, chillingly played by Scott Eastwood, that the other jerks can look at and think “At least we’re not as bad as that guy.”

These are men who, in reality, could be suffering from PTSD, from disabilities because of injuries in warzones, struggling to re-integrate into a society that pays lip service to their achievements while not doing much to support them. Here they announce that their greatest enemy is boredom, and they’d rather kill or die for money than live quiet lives ever again.

That’s plenty chilling, in a flick filled with plenty of sub-zero sequences.

Men. I just can’t even. Yes, I’ve ignored the fact that the film has massive, terrible plotholes in it, which make the whole implausible story even more unlikely as one that occurs in this world that we know, as opposed to some alternate one, but I don’t think that the major lapses in logic or sense really affect something so straight-ahead brutish and brutal.

The Wrath of Man destroys everything before it, because, it’s saying, in this fallen world, men are the true source and deliverers of divine vengeance, and it is never pretty. Plus H gets to shoot Post Malone in his stupid face, and that deserves extra points right there.

--
“I want your liver, your lungs, your spleen and your heart. By the way, his name was Dougie.” – the man knows what he wants - Wrath of Man