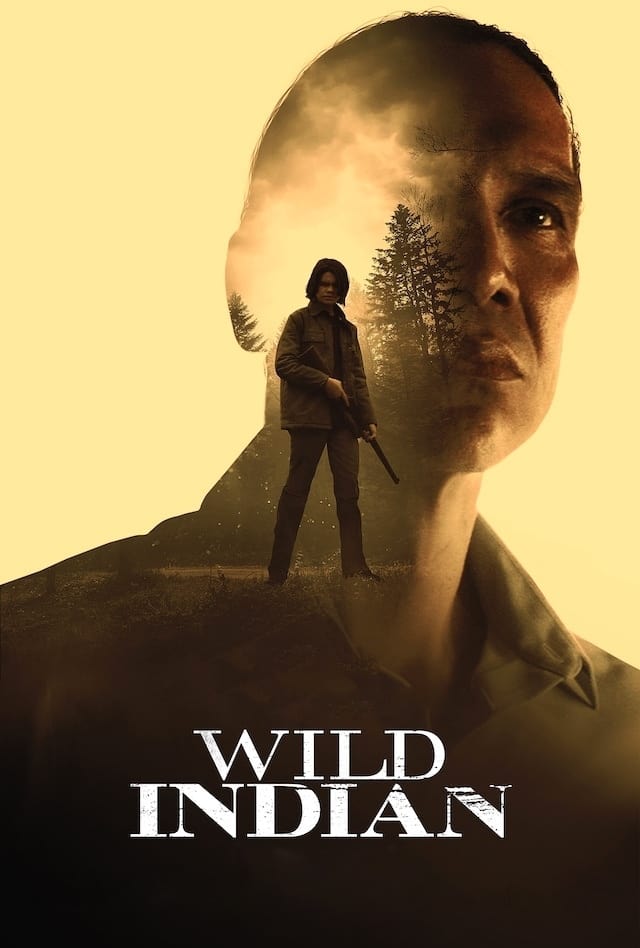 Behind every great fortune, or nation, lies a terrible crime

This is a pretty confronting, deliberately unsatisfying film. You don’t see a heap of flicks coming out of the States with First Nations / Native American leads or themes, and you also don’t see ones usually this dark. This isn’t about people reconnecting with family or their past, reconciling the enormity of the crime perpetrated against the native people of the Americas with today’s lived experience, or any of those platitudes.

Reservation Dogs is a recent (and the only one I can think of) tv series with First Nations kids as the leads playing characters living on a reservation, where the realities of their lives are leavened with a wicked sense of human and charming performances. Wild Indian has no such buffers

The brutal opening of the film is set in Wisconsin in the 1980s. M’kwa (Phoenix Wilson) is a young Ojibwe boy covered in bruises. A young Catholic priest at M’kwa’s school tries to gently find out where the bruises are coming from, but M’kwa demurs to say anything. His home life is awful, just awful. He has a father who cannot stand the sight of him, and who beats him just for existing. Bullied at school as well, at least he has his best friend and cousin Ted-O (Julian Gopal) on his side. They hang out, avoiding their parents as best they can, shooting bottles with Ted-O’s dad’s rifle just for something to do.

There’s a blonde WASP girl at their school, from ‘town’, and to M’kwa she comes to symbolise something very desirable and unattainable, and I don’t think it has anything to do with sexual desire. When another student starts dating her, it unleashes a resentment that will end up in tragedy, even if it doesn’t make a lot of sense.

M’kwa feels powerless against his brutal father, though he is tempted to do something drastic and final. You can see him seething at this other boy, a boy who’s done nothing wrong, whose living circumstances are probably not that different from his own. Which M’kwa himself sees, when he resentfully peers through the boy’s window, and he sees him comforting his passed-out mother.

The priest, delivering a sermon, explains what’s going on for those of us who can’t figure it out from what we’re watching. It may seem strange that, considering the people involved, why we would need a priest to explain stuff to us from the perspective of the Old Testament, when M’kwa and Ted-O themselves could tell us how shitty their lives are?

There is of course the original sin in the Old Testament of people eating an apple they were told not to, but then there’s the first murder in the Bible, being Cain killing Abel. The first brothers in existence, both make offerings to God, and one is favoured, and the other is not. The brother with murder in his heart slays the favoured one, because he can’t get back at God directly.

The question is less “Why would M’kwa kill someone for no reason?” and “what will happen now for M’kwa and Ted-O?”

This early part of the flick is so heartbreaking. Those poor children… and they are children. M’kwa’s voice is so high, so gentle, you feel for him what you would feel for any kids, any people, that no harm should come to him or loyal Ted-O. But the harm is already there, and they’re ready to visit upon others the harm that came onto them.

The flick does not follow a conventional path. It does not have a convenient Aesopian moral. Karma doesn’t apply equally either.

M’kwa, decades later, now in California, is not M’kwa any longer. He’s Michael (Michael Greyeyes) now. It’s 2019 now, and he’s working on his golf swing. If that isn’t a testament to how successful he is, he also works with Zuckerberg (Jesse Eisenberg), who sucks up to him and lets questions of work slide whenever Michael brings his ethnicity into. I know the character Eisenberg plays isn’t Zuckerberg, but I cannot tell you how surprised I was that he was in this film.

Michael is pretty successful, in…whatever it is that they do. He also has a blonde WASP wife (Kate Bosworth), and a child, Francis, that he can barely stand. He’s wealthy, he’s secure, and he’s something of a monster. When his wife tells him she’s pregnant again, an eternity passes, and about a thousand emotions pass across his face before he stumbles into the words he knows would be appropriate to say at this moment.

The most terrifying moment for me comes a bit later on: he stares down at his toddler son, and his outstretched hand hovers above his son’s head. That hand is quivering with something, and it isn’t affection.

Whatever it is that Michael did as a child, while he might have gotten far away from the scene of the crime and the reservation itself, it hasn’t made him any more chilled out as a person. If anything, as one could expect from people who get away with terrible crimes, it’s made him a cold and cruel person; it’s just that he tries to hide it from all around him in order to take part in late-stage capitalism and profit from it without the luxury of entitlement.

The calm of home and hearth is not for a man like Michael. The strip club beckons, and he chats amiably with a stripper, before convincing her to ‘meet’ with him in a back room. He doesn’t want sex, he just wants to choke her nearly to death.

It’s very disconcerting. He’s barely maintaining a façade anymore, really, and you’d have to think that something has to come to a head before he harms the people he pretends to care about.

Well, we’ve spent all this time with adult M’kwa / Michael, time to see how Ted-O is going.

Ted-O (Chaske Spencer) is just getting out of jail after another of many long stints inside. He has “OJIBWE” tattooed across his neck, and a bear paw print tattooed on his cheek. Good luck getting work at the local Starbucks, kid. Well, he’s not a kid anymore.

He visits his sister, stays a while, collects some of his things, and they chat about a lot of people who have died. It’s not highlighted, but these characters are people whose parents, if they’re around at all, die young. Addiction, poor health outcomes, violence domestic and otherwise; all the stuff that plagues the lives of colonised First Nations people plague these people as well. Ted-O is not looking for a way out of the cycle, like the one that Michael seems to have broken out of but hasn’t. Ted-O’s in search of an ending to his pain, the pain he’s carried since he foolishly chose to protect his cousin from the repercussions of his own actions.

The confrontation between them I think is deliberately unsatisfying and anti-climactic, and despite its resolution, puts Michael in a more precarious position, where he thinks his perfect life could pop like a bubble if the cops back home in Wisconsin figure out what happened 30 or so years ago.

This requires a trip, maybe a road trip, but no lessons are learnt, no adventures are had along the way. Michael has no desire to be back, and the one scene he has with the aged mother of the boy whose life he snuffed out pointlessly all those years ago is monstrous and revealing of so much anguish and ugliness.

Some of the stuff Michael says is shocking. It’s shocking. It shouldn’t be shocking, but it is. It’s not even just shocking because he’s a First Nations person blaming the survivors of the various genocides and Trail of Tears-like forced relocations and such for his lot in life. It’s shocking because it’s a mentality so poisonous that only further monstrousness can come from it.

This is not a story where a legal resolution would really make a lot of sense or bring any closure, I don’t think. The stain of what M’kwa grew up with and did is too vast, too all-pervasive. It’s not a film, either, where more modern ideas like talking about issues with someone, getting mental health support, opening up to your friends or partner, and then making reparations in some way to the community or something equally vapid. The seeds of the solution are planted right from the start, and I don’t just mean the Biblical references to the first murderer, cursed to walk the earth bearing the Mark of Cain. Right from the start reference is made to an Ojibwe tale of someone afflicted with a “white man’s” disease, which is probably smallpox, who, to save the rest of his tribe, must distance himself for their safety.

Images from this story, which isn’t really a story, just a cultural requirement, pop up, with M’kwa / Michael as the afflicted man, who needs to keep his poison away from others, but it isn’t a definitive moral. It doesn’t explain what Michael should be or must do. He could do more evil. He could find peace in his family. But maybe the tribe the tale is telling him to distance himself from isn’t the Ojibwe; maybe it’s his family, for their safety? Maybe the tribe he should be away from is all of humanity? Or life itself?

It’s one of the few films I’ve watched that I’ve thought would benefit from being longer. I wish the Kate Bosworth character had more to do that just be a blonde wife. I wish the confrontation between M’kwa and Ted-O had been handled differently. I wish there were more scenes of M’kwa and Gretchen, his wife, really struggling together to figure out who he is and what he’s done, and how he can live without bringing forward the misery of the past onto his own children. I wish Ted-O had enjoyed a different fate, because he asked for and deserved none of this, just like poor James Wolf back in 1988. But my wishes shouldn’t alter anything, because this isn’t my story.

We don’t’ get a clear sense that anything is resolved in a positive way at the end, but I always have hope, even for fictional characters. Wild Indian is sometimes clunky, but it’s a pretty strong flick overall, mostly because it’s pretty uncompromising, and it’s not telling a story told many times before in the same ways. Michael Greyeyes is a pretty intense actor, and I’m almost scared to see him in anything else.

--
“It’s not my fault Indians are a bunch of fucking liars and narcissists,” – I didn’t say it, he said it - Wild Indian