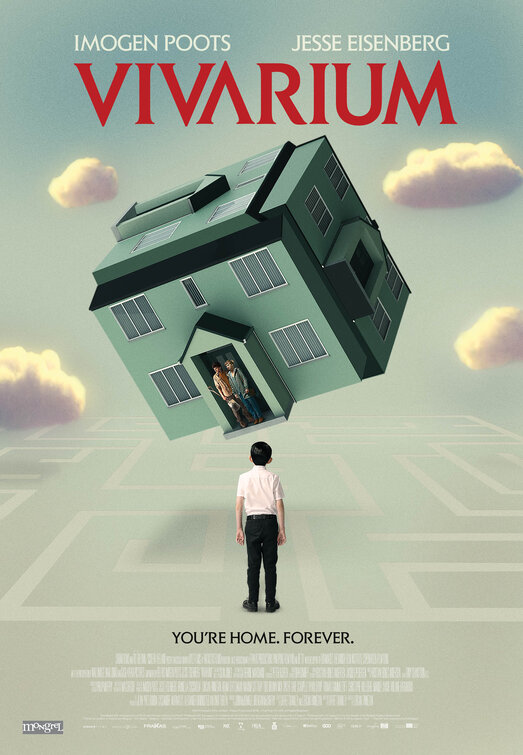 Vivarium is an unpleasant and disturbing movie with little point that I could discern. I’m not sure if it was intended as satire, or a cautionary tale, but in the end, it really didn’t feel like it justified its own existence.

It’s not painful to watch or actively stupid. Neither is it offputting or horrific enough to have that going for it. It feels like a Black Mirror episode which forgot to have a vicious punchline that illuminates just how terrible people are. All it illuminates is that if there was some mysterious creature that looked vaguely human but wasn’t, that could kidnap people and put them somewhere they couldn’t escape from, it would be bad.

If it’s point is that something like what happens to the two protagonists here would be terrible to endure, well, derr fred, no doubt. Most stories usually need something more than that. Chopping my toe off with an axe would be bad, but I don’t think I should get to make a film about it (though Zuckerberg / Eisenberg is welcome to play my big toe any time).

A young couple (Imogen Poots and everyone’s favourite Zuckerberg Jesse Eisenberg) are looking for a place to live. She’s a primary teacher, he’s a, I dunno, groundskeeper Willy or something. It’s not clear where they are, but it’s not going to matter anyway. They wander into a storefront that we assume was a real estate agent or something. A really creepy looking guy called Martin promises them that the place they’re looking for is in a planned community called Yonder.

When they travel to Yonder, they find a place of thousands of identical houses. There is no one else around. Martin shows them No. 9, and literally disappears. Gemma and Tom try to drive away and keep turning up at 9. Whatever they do, they can’t leave.

The next night Tom burns the house down. The house reappears, and a box, also. There is a baby in the box. On the box is printed “Raise the child and you shall be released”.

O-kay. So they’re trapped in suburbia, with a child they don’t want, and for invisible reasons they can’t leave.

Does that even qualify as satire?

The thing that looks like a child we are pretty sure isn’t a child. It speaks with a horrifying voice that sometimes mimics its pseudo parents, but mostly the fast growing creature just screams when it wants something. And it always wants something.

Both of these poor people start looking like the exhausted parents of a newborn, but one which happens to be the spawn of something satanic. It watches them when they have sex, too.

Tom starts digging a hole. That’s pretty much what he does for the rest of the film. The hole gets deeper, he gets sicker.

Gemma, initially fears and hates being around the weird thing, but for a stretch she feels closer to it, or feels like if she’s kinder to the creature, that maybe they’ll be released from their indentured servitude faster. It’s not that it backfires, because being nice to horrible things is usually the key to unlocking one’s own freedom (in stories; it doesn’t work as well in the real world, unfortunately), but here it ends up confirming what we already know, which is that the thing they’re raising isn’t human.

So. It would suck to be trapped in this circumstance. I get it. It’s a given, a really easy thing to grasp. Gemma and Tom didn’t really do anything, took no action, expressed no horrible opinion or desire, did nothing terrible to warrant ending up here. They weren’t greedy or selfish, they didn’t run anyone over or steal someone’s precious inhuman spawn. They do their best with the horrible creature, but it doesn’t seem to matter whether they’re nice to it or not. It doesn’t care, because there is nothing human about it, regardless of its mimicry.

It’s such a patently odd scenario, so flatly maintained, to no eventual end that it said nothing to me about anything; about the perils of parenting, of being selfish when having kids to look after, of attachment parenting or neglectful parenting, or any actual parenting, or the strain that it puts on relationships. It’s such a mundane but unreal place for them to be trapped in, that the two don’t really mix well. It’s mundane enough to look like a place people could live, but the fact that it doesn’t look or feel like a real place on earth, like it’s some very boring hallucination that they can’t wake up from, cuts out the satirical value of the proposal.

The digging motif – at first I thought it was depression, or like something that was going to reveal the true nature of where they find themselves, but in the end it’s just something pointless to keep Jesse Eisenberg occupied until the end. There’s something of a reveal, but it’s pretty much only an indication that whoever does this crap to innocent people, has done it to other innocent people.

One moment occurs where the veil is slightly pushed aside, causing Gemma to cascade through a bunch of these weird pseudo-suburban prisons, and they’re colour coded for our convenience, but all it indicates that a lot of people are suffering because of these weird creatures.

We’re given one touching scene between Gemma and Tom, towards the end. They get to act together, and while it’s a great scene, it underlines the absence (not of good acting, because they’re both fine actors, there’s just not a lot for them to do here other than look disgruntled) of stuff for them to do for most of the film.

And. Then that’s it. Thanks for coming. It ends in as unsatisfying a place as you could imagine, with the clear implication that it’s all going to happen again to some other unsuspecting couple.

So. Vivarium. It is a film. It came out this year. It’s probably about something. Maybe I’m not smart enough to have grasped all its tedious intricacies. I recommend it to no-one.

5 times parenting has never been this bad out of 10

--
“I’m not your fucking mother.”
- “Whatever”. – profound insights in the inhuman condition – Vivarium