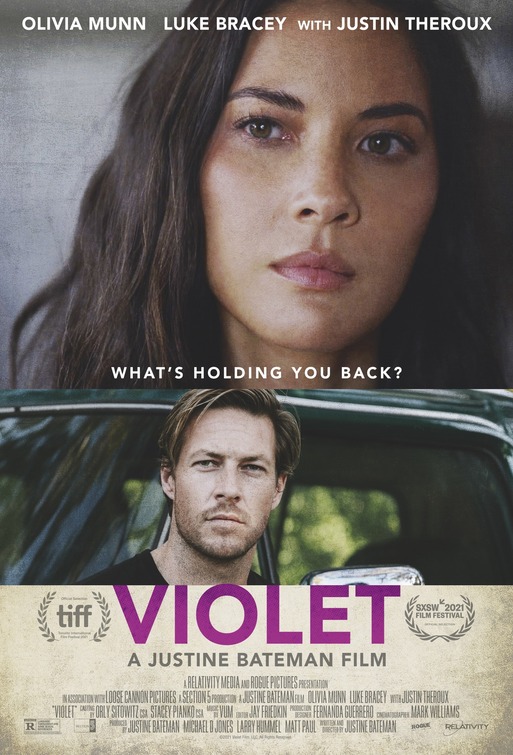 This poster... does not give a good sense of what the
flick is about.

Violet feels, at least from my limited perspective, like one of the most insightful and realistic depictions of what it could be like trying to survive in life while coping with severe anxiety. I say this not because I have been diagnosed with anxiety or depression, and nor am I trying to co-opt the lived experiences of the many people I know living with them. Or those no longer living with them.

I don’t know, I don’t pretend to know, but I do have two things: a level of hypochondria that at least, when I’m watching something, convinces me I must have the thing a character is experiencing, which fades a little while after a film ends, and a capacity for feeling very overwhelmed and anxious when watching movies about people experiencing overwhelming anxiety.

While I can reel off a whole bunch of films that have made me feel very anxious while watching them, through editing choices, cinematography choices, sound editing or performance, I’m not so self-involved that I think that is the same, or even comparable to the experience of generalised anxiety or the other myriad variations on the disorder. Getting anxious during a roller coaster ride makes sense. The real issue is experiencing that level of anxiety when you’re NOT on the roller coaster ride, and people are wondering why the choice of dairy milk or almond milk for your latte has reduced you to sobbing in a café, and you can’t explain it because you don’t know yourself.

If there are aspects that I can relate to, well, they’re more universal. Paralyzing self-doubt, self-consciousness, lashing out at people trying to help – many of us do that shit even without anxiety, so, yeah, can relate. This, being a character study of a person with extreme anxiety, brings us into the mindset of the main character, Violet (Olivia Munn), with extensive use of voiceover, but also with some other stylistic tricks, like having words appear on the screen, in cursive writing, sometimes letting us see how Violet really feels or what she really wishes, when her words, and the voice of her inner critic, are saying the diametric opposite.

Violet works at a film studio, as a script supervisor, and she’s successful at her job, with underlings and such of her own, but she’s afraid to assert herself or tell the staff to get back to work, because she doesn’t want to be seen as a bitch, so instead they just walk over her. Her boss seems to treat her like a star pupil, but there’s a malice to his power over her, because he feels like he can make her dance like a puppet whenever he feels like it.

Violet has a friend who is there only to reassure Violet that she’s great when The Committee (Justin Theroux) is telling her she’s a piece of shit. That friend, being Lila (Erica Ash) doesn’t seem to exist outside of the two times they meet up, so I wasn’t sure if she really existed within the context of the movie, or whether she was a hallucination.

But I’m sure she really does exist. Violet really only seems to have two groups of people in her life: friends she’s still friends with since childhood, work people she has to play the game with in order to fit in, and no-one else. Certainly no family to speak of.

When she’s speaking to Lila the first time, and explaining that, like everyone, she has a committee in her head telling her she’s a piece of shit all the time, and Lila looks on mystified, saying, “um, no”, Violet is confused. Up to this point in her life she seems to have assumed that everyone has this same chorus undermining every aspect of their existence with their constant criticism.

This little exchange is done casually, but it really emphasises a lot of stuff (from a cognitive psych perspective) in a fairly elegant way that the rest of the movie keeps belabouring and pounding home with underlining and highlighting. Upon hearing that Violet has a chorus of naysayers in her head questioning her every decision, Lila openly says she doesn’t experience the world in the same way, and if contradictory thoughts popped up, she’d probably dismiss them as being bullshit.

You know why? Because Lila grew up with parents who told her she was great all the time, and she believed them.

Oh, to have such parents. Thing is, though, I know plenty of people who had parents who thought they were great, and that the sun shone out of their arses, and they still deal with serious mental health issues throughout their lives.

And why? Because nothing is ever that fucking simple in this life.

This plants a seed in Violet, though, which only pays off way later in the flick, because at this stage, when Lila mentions one of Violet’s passion projects, Violet sees red, literally red (the screen fills with the colour red, in case we didn’t get it), and she lashes out at Lila, telling her to mind her own fucking business.

As she’s doing this, and she shifts from dismissive and defensive to attacking, on the screen are superimposed the words “please don’t leave, please don’t leave”, but Lila does, because she can only hear the words Violet is saying, and can’t see the screen like we can – she can’t hear the part of Violet that is begging her to stay.

“There” says her inner shitty voice once Lila leaves, “Isn’t that better?”

Maybe I’m an easy mark, maybe I’m just unusually susceptible, but these stylistic choices, these ways of getting across Violet’s state of mind beyond her acting choices and dialogue, they really hit home with me. Other critics or reviewers describe them as being over the top or unnecessary, or that they are too obvious or on the nose. It didn’t strike me as such. The fact that it’s overbearing and overwhelming is the fucking point, not the dialogue. The fact that the situation or the set up is not as important as the fact that stuff that feels like it would be a simple situation for other people to deal with or get through, becoming one where it takes a herculean, inhuman effort just to get away from somewhere without shattering into pieces in front of them, is the fucking point.

And when the voice says, yet again, “There, isn’t that better?” after each bruising scene, it’s meant to be more gutting each time, and for me it was.

She runs into someone she used to be in a relationship with several years ago, and though she starts off trying to make chit chat and all that, the voice in her head gets louder and louder, so we can’t even hear poor Martin’s (Simon Quartermain) responses.

On top of that. Violet is reliving the shame of what happened that presumably ended their relationship, being the small fire that happened in the apartment they lived in, caused by some candles she left burning.

This scene is so, so interesting to me. She’s about to leave the apartment, and goes to blow the candles out. It’s the responsible thing to do. The voice convinces her, hey, chill out, why are you so uptight, show Martin how not uptight you are, by just leaving the candles burning. It’s cool, be cool for once.

It’s emblematic that this inner, shitty voice that can lie to us any time, can lie in ways that are completely antithetical to how we ordinarily act. There’s no logic to it, no rhyme or reason. You could just as easily have made the scene about how not blowing the candles out left her a complete wreck because she couldn’t stop obsessing over whether the place had burned down (which, if you know any people with anxiety or obsessive-compulsive disorder, would seem the more likely path).

But that’s just how seductive this inner voice is. It says whatever, whenever and there’s no internal logic, there’s no rhyme or reason, because that’s not how it works. A voice, an impulse, an aspect of our thinking that compels us to think of the worst possible outcome for every action we try to make isn’t doing it for our own benefit.

It’s doing it because, well… When you’re drowning in fear, you could even think the rope you’re reaching for is a lie, or that’s it’s attached to a shark, or anything else, when you’re conditioned to think the worst and that you deserve the worst, it’s a strange form of perfectionism that guarantees you can never let yourself win.

The implication is that Violet has a lot of these negative feelings about herself because of her family, who seem to be uniformly shitty people, but it’s not like we ever get to see into their minds, or their hearts. We just see one memory, of a young Violet coming home and being berated by her mother, and two phone calls, one with an aunt, one with her brother, which just makes them seem like awful people.

But…but were we not just watching a film where a person sometimes lashes out at people, and the real reason why they’re doing so is because of some drama playing in their heads, some awful pent up feelings, which, if they had the time or perspective to see, they’d be able to take themselves out of it, and find the space to speak more kindly?

Why is it only Violet allowed that space, that luxury?

I think Violet, as a film, does an amazing job of getting these ideas across. It’s probably the best performance Olivia Munn has ever given in a film, and it’s not an easy performance. In the past the way I would have expected a story like this to have scenes of drug or alcohol abuse, and self-destructive behavior, but the flick wisely avoids that, because the caustic element of her internal monologue speak far more resonantly than that sort of clichéd shit could.

If I have any criticisms of the flick, and I have a number, it’s that these elements of her life, of who she is, and how to be more like she wishes she could be, are resolved somewhat so, so neatly towards the end. There are of course important revelations that she comes to, some of the time with the help of others, sometimes by giving herself the space to realise that doing the opposite of what the committee says is often the right thing that she wants to do. But it seems awfully, what’s the word, easy, that she gets to this stage, of personal, professional and emotional clarity, without professional help, without a support network, without, I’m going to say it, counselling and medical intervention.

I’m not saying it’s the only path, but… If I’m caught up in the sweep of it, yes, it feels satisfying on some level, but then I think of all the people I know for whom these issues are never so easily settled, the voices are never silenced, only sometimes muted, sometimes the volume is turned down, but that’s about it. It’s never completely gone, and these kinds of realisations can help, but it’s not all the time, and nothing is permanent, neither relapse nor recovery.

But what do I know? It’s not like I’m an attractive Hollywood insider, yearning for simpler days when I rode my bike without a care in the world, before climbing to the top of my profession with my handsome blonde boyfriend in tow?

And all it took was believing in myself…

7 times it goes from gutting, harrowing, sad, hopeful, to triumphant in an almost unconvincing way out of 10