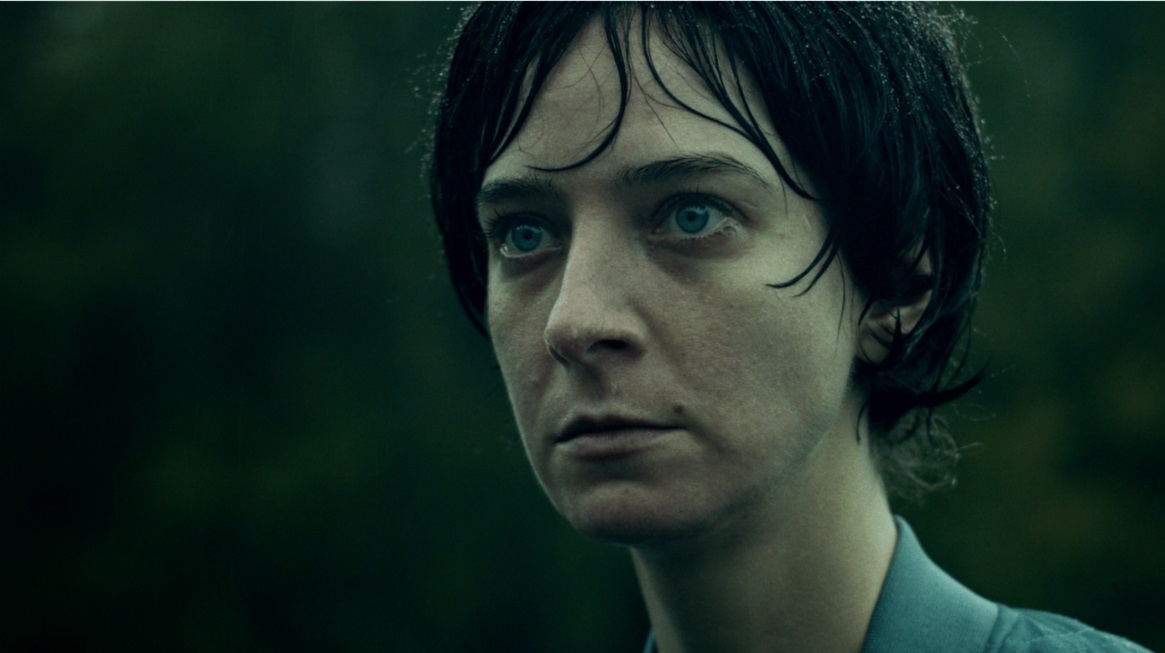 Vengeance will absolutely be hers

Violation is a pretty horrific descent into a story that brings no comfort or catharsis, at least I don’t think so for the audience, even as it deals with someone getting revenge on someone for raping them.

I know, I know that sounds like a cheery subject for the whole family to sit around and watch, grandma too. It’s a curious sub-genre within horror, but this is… nothing like those other exploitation flicks, the most notorious of which is probably I Spit on Your Grave, and its sequel, I Spit on Your Gravy.

The central relationship in this story is between two sisters, Miriam and Greta (Madeleine Sims-Fewer and Anna Maguire), who have a somewhat salty manner with each other. They haven’t seen each other in a while, and Miriam and her husband Caleb (Obi Abili) go out into the Canadian wilderness in order to stay with Greta and her husband Dylan (Jesse LaVercombe). Even though Miriam and Greta speak with English accents, they apparently grew up in Canada, and Dylan was a childhood friend to both of them prior to Greta and Dylan marrying.

Greta and Dylan seem happy together, happier at least than Miriam and Caleb seem to be. Miriam’s fractious relationship with her sister is also mirrored by the fact that she seems to have fraught relationships with every character. Though she gets along well enough with Dylan, and chats freely with him about all sorts of stuff.

You can kind of guess where this might be going, but even I, having read reviews of the flick after some film festival, possibly Toronto’s, am staggered by what happens in this flick.

It’s a horror flick in the sense that something absolutely horrible happens in the flick, and because the person whom it happens to cannot live with what happened, she enacts an all encompassing revenge that annihilates her betrayer, and we watch it. That’s disturbing and incredibly bleak.

I could get (even more) pretentious and argue that the title possibly doesn’t refer to what happens to Miriam (even though clearly it is a violation of her person, her autonomy, her body), but to not even being believed as to what happened. No-one believes her, least of all her sister, who assumes Miriam not only consented but seduced Dylan.

That is a violation, of the sisterly bond, if one existed. But the problem then even becomes that Dylan himself, prior to facing his fate, also doesn’t think he did anything wrong, if anything, he thinks he and Miriam are having a hot affair.

It’s kinda staggering. It also kinda reminded me, of all things, of Mike Tyson’s trial for rape back in the 1990s, for which he was convicted, thankfully. At the trial, I recall reading that his lawyers, and he himself, tried to argue that he didn’t even understand the concept of consent, or that a woman could decline to have sex with him, once she was in private with him. It didn’t compute, therefore he should have been found innocent, was their staggering argument.

The narrative is fractured in time, so there’s a lot of jumping back and forth, so I’m not entirely positive as to how much time passes after the crime, and when Miriam enacts her vengeance, but I feel like it was a year. A year to really think about all the intricacies involved in killing a person and then disposing of their body in a manner which erases them from existence with no traces. When you think about it, it’s horribly disturbing, and I in no way want to think about such things at all. But that’s why I picked an arbitrary length of time like a year to depict the length of time where Miriam’s every thought has been about how she’s going to do away with Dylan and not get caught for it.

It's sickening, and it makes her sick too. Like, literally. There are lots of images, scenes in this flick that are kinda surprising, mostly because they’re not faked at all. I’m not implying Miriam really kills someone (if so, rest in peace Jesse LaVercombe, we hardly knew ye), but Dylan’s “excitement” when he thinks he’s just about to have sex with Miriam when he’s about to be executed is, how can I put this delicately, something he has a handle on, and something very much that he shows to us, the poor audience, in all his masculine glory. But the scene later on, when Miriam is at her biblical work, and she is throwing up, that’s not faked either.

And look, I don’t love watching scenes where people get murdered, and nor do I enjoy watching people throw up (very much the opposite, I must say). But the hyperreal manner in which the flick focusses on and gives time to Miriam and her plan isn’t to glorify what she does, or minimise it either. It shows the grim business of disposing of a hated enemy, in a manner that shows just how all-consuming that hatred, however justified, has become.

The film also, bafflingly to me, goes out of its way to make Miriam complicit in what happened to her, to make it seem even less justifiable that she has gone to these lengths. There is the clear implication that getting drunk, talking about the difficulties in her marriage to Dylan, and, yes, giving Dylan a quick peck of a kiss is somehow = she wanted what happened to happen. It’s doubly baffling to me because Dylan’s confusion about her reaction, and Greta mentioning that Miriam has a habit of overreacting to perceived slights to others by taking revenge, are meant to make us think, despite the evidence of our own eyes and ears, that maybe she’s wrong.

How can that be? There are also the scenes of her trying to have sex with her husband at the time right after the rape, or of the scene where Caleb is getting along fine with Dylan and Greta, and Miriam attacks him for it, telling them he thinks they’re phonies, scenes calculated to increase our dislike of Miriam, or at least to relate to her less, and honestly if the actor playing Miriam wasn’t also one of the directors of the flick, I’d suspect the director hated her personally.

In case we weren’t conflicted enough, in the midst of her disposal of someone’s earthly remains, she overhears an argument in Quebecois between a husband and wife, and she starts attacking the man verbally in a way that freaks them both out, and we’re meant to think: Miriam is a holy avenger from the Old Testament, within whom burns the righteous fury to destroy the wicked, and she will unleash it on anyone.

It’s complicated, it’s ever so complicated and unpleasant and we’re never made comfortable with what is happening, and, really, should we be? We take it as a given in countless other flicks where people get revenge that they deserve to get revenge, and the people they get revenge against deserve to be destroyed, but that’s us being complicit, siding with the fundamentally immoral and fascist argument that if someone wrongs us, we have the right to exact some form of revenge. That feels satisfying in fiction for us, even when we know few of the societies we live in allow for such retribution. The law doesn’t account for it, because it does not allow for an individual right to such a thing: the State takes on that right on our behalf, exacting retribution or justice on our behalf as well.

Which is why so few rapists ever get charged and convicted. Maybe Miriam is right, maybe this is the only way one could get justice, true justice, even if it is maniacal and inhuman in its fury.

If women, the world round, were given the option to have the people that have hurt them in such a way die on the spot, explode into nothing, painfully, I imagine half the guys on the planet would disappear, and few of them would be lamented. Instead, Miriam is here to show them the way forward.

There is no sense that Miriam necessarily will have everything go right in life from now on. I think people will notice that Dylan is missing, and the simple fact that not a single cell of his remains doesn’t mean that the authorities wouldn’t think to pursue her anyway.

Plus I don’t think her relationship with Greta is going to improve either.

There are multiple scenes of wolves eating prey, or of rabbits caught, being skinned and such. Hunters and prey, nature red in tooth and claw, and for whatever faults she may have, we have no doubt which one Miriam is.

This was a highly disturbing and confronting flick to watch. I will never watch it again, that’s for sure. I will however look forward to seeing what else these directors and crew do down the track. Violation is also a bit of a confronting title, but what I foolishly didn’t realise is that it’s aimed at us as well. Seeing something like this takes away something from us too.

--
“You know when Sheldon Val called me a slut, you went to his house and poured bleach on his mother’s flowerbeds. I begged you not to, but you did it anyway. And his family hated me for years, and you went around feeling so good. You landed this left hook on my behalf, everyone called you my white knight, but you’re not. It was more important for you to be my crusader than to actually give a fuck about my feelings.” – sisters bonding over sisterly stuff - Violation