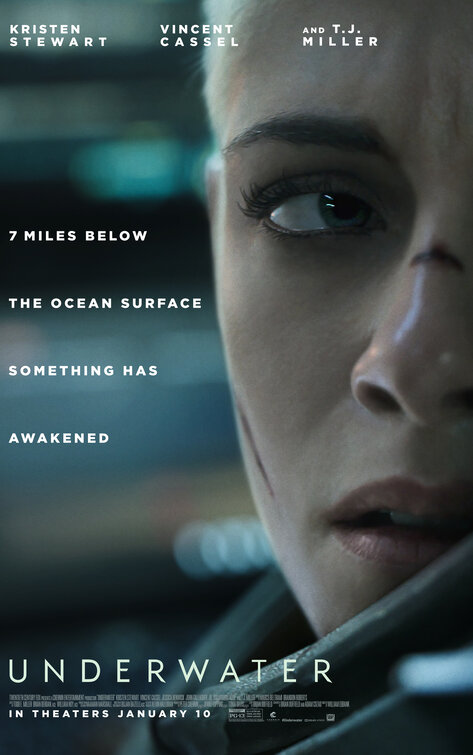 Streamlined for maximum speed at the bottom of the ocean

It’s…hmm. So, well, people put a bunch of money together and thought that making an updated version of Aliens without having to pay whoever owns that franchise any money was a good idea.

And, it’s fine, I mean, as an idea, it’s fine. They also set this deep underwater on our actual planet, which means everything basically functions the same than as if they were in outer space or on some inhospitable planet: go outside the walls or outside of your suit, and you’re dead.

And they got Kristen Stewart to essentially play Ripley, but, it’s Kristen Stewart, so it’s her playing Kristen Stewart playing Ripley, with a shaved blonde head and all. She is quite striking, admittedly, and yet the hardest ask is us believing that she is an engineer. They never show her binge-drinking, not once.

An engineer, mind you, located in a facility 6 miles underwater in the Mariana Trench, literally the deepest point known of any part of the planet. I can believe the engineer bit, but the other bit is too fanciful, even for a sci-fi movie. There’s a massive main facility, and a bunch of other ones as well, all having been constructed with concrete and metal and stuff, and you just think: How? The pressure at those depths would crush almost any materials of any thickness like a hand crushing a drink can, and yet for this story to work we have to believe that somehow a bunch of people in high-vis built all this stuff just so our heroes can run around and die, one after the other?

It's an environment so dangerous that tiny flaws in equipment will implode people with a second’s notice. The survival of the bunch of people we see is so unlikely that they have to indulge in way riskier activities in order to go from a slim chance of survival to a slight chance of survival. And Norah (Kristen Stewart) is along for the ride, using her working-around skills whenever she can to find solutions to the cascade of errors going on around her.

But this isn’t enough. I mean, if the remaining crew can’t get to yadda yadda before a deadline, then they’re all going to die, if they stay in place, the facility will be destroyed and kill them, and there’s no safe way to get to the surface without using escape pods because of the bends etc. And yet all these dangers aren’t enough.

Unlike the ‘colourful’ cast of Aliens, which had a whole bunch of space army types / characters who at least make an impression before they’re torn apart by xenomorphs, this has a bunch of people famous for the other stuff they’ve been in, rather than anything interesting or personality-driven that they do here. Vincent Cassel shouldn’t need an introduction, and he plays the captain of the facility(?) They keep calling him “captain”, though maybe it’s just his name or they’re being sarcastic.

He, notably, doesn’t go crazy or kill anyone just for looking at him funny. He is calm and measured, and encourages people to believe in themselves, so that they can survive and live to die later in the day, maybe. He is the one that states what the survivors are going to do in order to get to the surface.

Even the names used for these depths are more mythological than scientific-sounding: Hadal depths and abyssal plains. It almost sounds like a place from which bad things would spring forth, fully armed and toothed, ready to eat tasty humans the way humans eat tasty seafood.

Well, now imagine some of those vampire squids or gulper eels or anglerfish, all smooshed together and about the size of a person, and you’ve got thousands of these critters trying to kill our heroes, for no good reason other than it wasn’t dangerous enough already.

I’m not really scared of CGI creatures, even if they are wangle-toothed horrors, but the claustrophobic setting really did my head in. There are many scenes where people are wiggling into or out of the tightest spaces money can buy, and I’m not making a sly sexual innuendo, though I guess now it just became one because of what I said. Damn. There is no nudity in the flick, but there is a lot of nakedly competent science types making some good decisions but mostly bad in their drive to survive.

Any group of people has at least one screaming idiot who almost gets everyone killed, and in this flick that role is divided into two by having the grating annoying jerk who always cracks wise taken care of by TJ Miller, who has somehow redeemed himself for allegations of sexual harassment and being drunk on the set of Silicon Valley, here playing Paul, and the screaming terrified lunatic duties taken care of by Jessica Henwick.

Henwick was a complete martial arts badass in Marvel’s much maligned Iron Fist series as Colleen Wing, but here the story requires her to use her actual British accent and basically do endless variations on “I’m going to die” or “we’re all going to die”, and let’s face it, she’s 90 per cent right. Because I mostly associate her with a different fearless character she played in something else, I found her totally reasonable and entirely appropriate terror in the face of the terrifying aggravating, which is deeply unfair to her performance. There is even somehow something of a love story in this, but I honestly found myself surprised that they kept pushing it, and I cannot for the life of me even remember the other guy, who I will refer to solely as the guy with the beard (John Gallagher Jnr), or what he contributed to the general merriment.

I’d be lying if I said I was completely enraptured by the proceedings, because I felt like a lot of it was deeply implausible even within the acceptable range of weird, implausible things that we generally accept as commonplace in these kinds of movies. But it was pretty well done, and Kristen Stewart does a sterling job playing the role seriously but like she gave zero fucks about anything at any stage. It makes her actions at the end pretty punk rock, I’ve got to say, even if I wonder why the film makers thought that was an ending we’d be happy with. That some people survive in the end is commendable, I guess, but I’m not sure at all that they are people we could care about.

For an updated version of at least 2 James Cameron movies, but not the one with the Queen of the World moment, smooshed together in a fairly lean format, sure, you could do worse than Underwater. But, you might ask yourself whether watching something about desperate people trying to survive a horrific outbreak and a deadly environment is exactly where your head is at, at the moment, because honestly…

--
“What's the scariest part of a roller coaster? Waiting in line.” – that’s not true on so many levels that I wish to formally complain to The Hague about it – Underwater