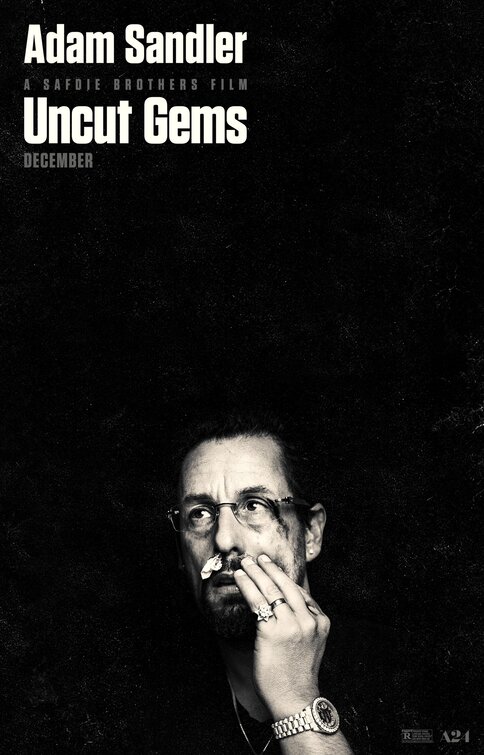 Maybe the uncut gems are inside of us, or maybe it's just
a literal title. About some gems. That aren't cut

Sometimes, you watch a film, about a character, and all you can really say about them is “what a piece of shit.”

Howard Ratner, the character Adam Sandler plays here, is an absolute piece of shit. There’s not a single way around it. I don’t care if Sandler was nominated for awards for playing this character, even more I don’t care that people were saying this is finally the time that Sandler will be taken seriously as an actor (which they said every time he did a ‘serious’ role over the last twenty years). The character he plays here is an unremitting, utterly relentless piece of shit.

The way you can sometimes hide a cascade of character flaws like that, which in total result in an absolute piece of shit, is by having worse people around them. In Uncut Gems, there’s no-one who’s more of a piece of shit, so there’s that going for Howie – he’s top of the pile.

This film is an exhausting, unstoppable, anxiety-inducing downhill slalom, by two people who currently have the monopoly on this kind of hyper-caffeinated cinema, being Benny and Joshua Safdie. Good Times, their earlier flick with Robert Pattinson in the lead, was pretty much the same kind of experience with even scuzzier and more desperate people. But this…

My gods, Howard. Spending time with him is exhausting, he’s an exhausting person. In your life, if you’ve lived long enough and met enough people, you have met people like this, people who are themselves a simultaneous slow-motion and lightning fast car crash that is only ever ongoing. As long as they are awake, they are whirling around bouncing off of everyone and everything in their orbit. It can make for fun times and excruciating times, sometimes at the same time.

Howard owes money to bunches of people, but especially his psychotic looking brother-in-law Arno (Eric Bogosian). He keeps making more bets in order to get himself out of a hole, but each action he takes digs him in deeper. He has a diamond wholesale business, but he has a friend, Demany (Lakeith Stanfield, who has to be in everything at the moment) who brings in rappers and ball players to buy their cheesy bling from Howard. So, at any given moment, Howard is spinning plates badly to keep himself above water and to continually put himself in more danger as well. He doesn’t feel alive if he isn’t risking everything and potentially failing.

The opening scenes of the film are set at a mine in Ethiopia, where someone has mangled their leg, or been mangled by the appalling Workplace Health and Safety regulations that they doubtless ignore there. As everyone keeps yelling at their Chinese management, two chaps sneak back in to the mine, and find (and steal) some kind of rock with gems in it.

In the middle of Howard screaming at multiple people around him, and people on phones, he receives a package delivery, something he’s been working on for months or years. A box. With fish in it.

I thought, at this early stage, “that’s odd”. Fish are easy to come by, but gems hidden inside them must be pretty rare. I’m sure it’s not the illegal smuggling of gems into the country, it must just be a coincidence that some fish swallowed the black opals that he really, really wanted.

By the criss-crossing of paths and the chaos of all these people being near the gravity well shitstorm that is Howard, Howard ends up loaning the black opals to a Boston Celtics player called Kevin Garnett, who gives Howard his championship ring, which Howard immediately, like, within seconds of getting it, hocks the ring at a high-end pawnshop, and places bets on the game Garnett is playing that night.

You would think that it would help that they win, and Howard’s bet looks like it has paid off, and that everyone will be happy. And we can all go home early. But the universe, in the shape of Howard’s brother-in-law and his hired goons, won’t allow it.

So much more and nothing happens at the same time, in a manner that could make you think “all this shit couldn’t be caused by one person in so short a space of time”. But it does, and it keeps happening, to someone who doesn’t want to or couldn’t live any other way.

Because life isn’t complicated enough for Howard, as well as a wife and kids who hate him, he has a much younger girlfriend who, against all logic, loves him. Julia (Julia Fox) is pretty much a fantasy character, unless one thinks that everyone who acts as selfishly as a mobster gets to have a girlfriend 30 years younger than them just by default. Although, maybe she just needs the money.

In part of his desperate attempt to get the black opals back, Howard goes to a club where The Weeknd is performing, and wouldn’t you know it, not only does he manage to piss off anyone and everyone in the club, but Julia feels the need to sell or share some cocaine with The Weeknd, who, acting like you would pretty much expect The Weeknd to act given almost every song he’s ever sung is about fucking and drugs, suggests they have sex. And she tries to stay loyal, but, c’mon, it’s The Weeknd.

When Howard finds out he goes ballistic, but, c’mon Howie, surely you should be able to look the other way? Hell, as long as he uses protection I don’t think anyone should begrudge their partner having sex with The Weeknd. It should not be grounds for breaking up, or even being mildly testy afterwards.

There’s even a goddamn Passover dinner, as if enough wasn’t happening, where things seem to go smoothly, at least for a short while. It lulls Howard into thinking this family life stuff ain’t so bad, maybe. The moment which resonated with me the most here is where Howard is speaking to his wife (Idina Menzel) asking her if they can give it another go, maybe try to stay together, why not? She stares at him a good long while, and bursts out laughing because, honestly, she hasn’t even seen all the shit we’ve seen for the last hour and a half, but she has no doubt about how much of a piece of shit he is. She lists all the things she cannot stand about him, and it’s a pretty definitive, concise list, and you know she’s right, but you can also feel Howie’s dick shrinking down to sub-atomic particles at the same time.

After a multiplicity of more catastrophes and humiliations, everything, everything comes down to the auction, and even that Howard fucks up in a spectacularly Howard-like way, in that grinding down way where you just get that the point is that a sucker like this is never going to get an even break, or even an uneven one. He fucks everything up because he is a fuckup, there’s no doubt. We see it, we see it with our own eyes in every circumstance, everything is going to go wrong only and because he radiates this awful energy that corrupts all it comes in contact with.

Until the end, where it looks like Howard has just squeaked through, and he will be able to put everything back to rights. At this stage where anyone else would take a breath, thank their lucky stars, and make things right, he explains to the NBA basketball star Kevin Garnett as to why he has to keep fighting the universe, because that is the only way men like them can live.

So he ends up betting everything again. On a fucking game of basketball.

I cannot tell you what agony watching the various characters watch that last game on the telly is: it’s unfuckingbelievable tension, the intense state the film has put us in by that time. It’s even more painful than having to watch any actual game of sport. And we wonder, will this finally be it, will the universe (Howard’s brother-in-law) finally allow Howard to have a win?

Well, what did you think would fucking happen.

The closest antecedent to this flick that I can think of is the original Bad Lieutenant, with Harvey Keitel. Devoid of any of the Catholic stuff, and without as much perversion, both films are absolutely about two hyper-destructive people who are a curse on the people around them with very few if any redeeming features. But the Bad Lieutenant in the film whose title escapes me at the moment, at least tried to do at least one good thing for someone other than himself as an act of penance or redemption.

We hold out hope, for characters like this, for people like this, that maybe, if they choose to do something unselfish for once in their lives, just once, maybe they can have a moment of grace, of forgiveness, of at least being thought of positively by someone else, who also could be inspired down the track to do something good for someone in turn. Maybe, just maybe earn a fraction of redemption, to at least be able to look at oneself in the mirror and not feel like a total piece of shit for once.

Howard doesn’t play that shit. Howard’s in it for Howard. All he has is stomping on his enemies’ throats and screaming in their faces his contempt for them, for not being him. He doesn’t care, because he only cares about his next thrill, his next risk, his next big win, because the universe owes him, and it’s his time to finally shine.

And Howard gets what Howard is owed.

Films like this are hard to recommend. They’re so confronting that recommending them to someone else could be considered a form of abuse. I was literally pacing, watching the last half hour, even as I suspected what was coming, and even then, it didn’t make it any easier to swallow. This is a particular kind of film, particular kind of ride, and people should know that going in. This is no merry-go-round, this isn’t even a quick slide to the bottom. This is a rollercoaster ride with a meth addict at the controls where it’s definitely going to come off the rails, and you’re also being yelled at by the operator at the same time for being dumb enough to get on the ride in the first place.

Though there is no doubt that it’s a compelling character study. It is. It’s just that, you know, it’s a character study about an absolute piece of shit, so buyer beware.

--
“I think you are the most annoying person I have ever met. I hate *being* with you, I hate *looking* at you... And if I had my way I would never - see you - again.” – ask and ye shall receive, knock and it shall be yours – Uncut Gems