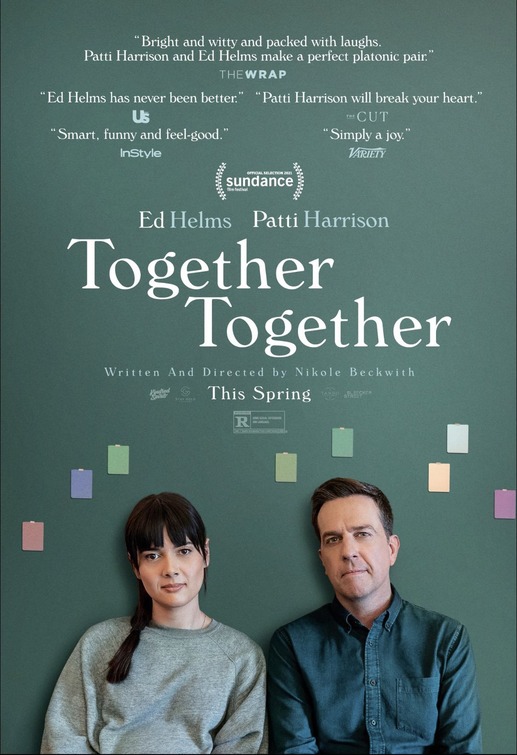 They look like they're about to interview you for a position
at their tech start up, but as an unpaid intern drowning
in coffee / energy drink orders, and abuse, but you'll
do it for clout / exposure maybe?

Together Together is a very modest, very small-scale flick, which is part of why I found it so charming. It mostly has two actors acting all the time on the screen, but the stakes are pretty low.

It’s a plot you haven’t heard and seen a million times before. A guy called Matt (Ed Helms) who’s in his 40s wants to become a dad. He does not have any partner, or seemingly ever had a partner, and wishes to get a surrogate to have the baby for him (for cash money), and then she can fuck right off out of their lives forever. The baby itself is from a donor egg, so there would be no genetic connection to the child for the surrogate.

Typing those words makes the whole process sound so awful. I assure you this is a light hearted comedy. It’s mostly about the awkwardness and the foibles of the two main characters.

Anna (Patti Harrison) is in her early 20s. She is one of those dreaded millennials that we were regularly told pre-covid were ruining everything for the rest of us. She had previously had a kid as a teenager but gave it up for adoption.

This time, at least, she wants some money for her troubles. She is… an interesting low-key character, in that she seems a bit isolated, but at least she has one friend / co-worker (Julio Torres) whose purpose in the film is to be extra annoying. Any of the millennial clichés she gets to avoid, Jules totally embodies.

The far more problematic character is Matt, in that there isn’t any diagnosed personality disorder or spectrum related discussions, but he is fairly horrible at talking to people in general and Anna specifically. His polite exterior covers a gaping, howling void inside. Immediately upon meeting Anna, and once she signs on the dotted line, he begins acting towards her like she’s an untrustworthy employee who needs to be heavily supervised at all times.

From that as a starting point he graduates to talking to her the way no man with a pregnant partner ever should, no matter how controlling or overbearing. The relief comes from when Anna pushes back against his bullshit, in a way that almost made me think he was the movie’s secret villain.

I guess we’re meant to be sympathetic towards him and his loneliness, and also perhaps to think that maybe becoming a father will unlock his weird personality, because he’ll finally have someone to give all the love he’s kept bottled up inside, but I couldn’t help but think “poor baby, you deserve better.” In truth you could say that about most people’s babies, possibly even all of mine as well, all 27 of them.

Sure, an army of bastards running amuck and committing high stakes crimes sounds cool initially, but then all that child support really cripples your finances.

Anna’s in a difficult position because she feels like she has to humour Matt a lot, far more than she would had they actually been people in a relationship together. And that’s also not a path that this flick is interested in going down. There is a substantial age difference between them, one which is remarked upon several times, and the flick never goes anywhere near there. Matt himself looks positively baffled by the idea (in a “girls, ew”, kind of way), but is still offended when someone thinks they might be a couple, and Anna shuts them down abruptly.

So not only is the icky age difference talked about, there’s two other interesting things about the flick. The first is the font used for the opening credits and such. It’s a very recognisable font, and very familiar to me. It’s called Windsor Light, and it’s been used for most of a certain director’s films since Annie Hall onwards. But before you start thinking this flick is somehow a homage to that renowned molester of children, Anna has an entire screed about what a piece of shit Woody Allen was only for what he did to Mariel Hemmingway and the whole fact that Manhattan was made and people loved it and only discovered he was a piece shit 20 years after making a film where he plays a child molesting piece of shit.

Matt backs down spectacularly after that. So, yeah, it’s no homage to Allen. Though I’m still curious as to why they set it up like that in the first place.

The flick is not all about what a piece of shit Woody Allen was, but about how people with 2 decades between them shouldn’t be in relationships together because eww. Also, there’s no hint of romantic chemistry between them, so that’s a relief.

There is, if I may be so bold, an emotional connection between them growing as the baby grows inside Anna. The question then becomes whether what is, on paper, a contractual agreement that sees Anna’s involvement in the child’s life end the second the placenta detaches from her uterine wall somehow changes, and whether she plays an ongoing role in Matt and Lamp’s life.

Oh yeah, forgot to mention, they call the baby Lamp for two main reasons: Anna’s doesn’t want to know the baby’s gender so that she doesn’t miss it too much, but she also doesn’t want to call it “it”. So they decide on the functional name Lamp because there’s no gender connotations to the word.

I don’t think the intention was to have the baby christened Lamp when it’s born, but how cool would that be? Hi, I’m Lamp Finklestein, a pleasure to make your acquaintance.

You’d be asked a stack of times as to whether it’s short for something, or what nationality it’s from, and I guess that would get a bit annoying, but otherwise it’s a winning name.

When they start getting closer as humans, as the pregnancy progresses it’s actually a relief, but what it means is that the dumb stuff Matt tries to insist upon slightly decreases. It starts with him insisting she wear pregnancy clogs, which she refuses to do, and then also intrusively trying to control her sex life. There are also a bunch of times where you feel like Matt barely sees her as a person at all, and as just a vessel for his hopes and dreams without the option of self-determination.

But Anna is a person, with hopes and dreams of her own. She hopes to finish college with the money she’s received from Matt, which means she would relocate from San Francisco to Vermont, but it means at least that she’s got some plan with her life. I have to think this was all done pre-Covid, because, really, the plan for the last two years has been mostly to survive, somehow, but I guess some people are thinking about what to do with their worthless lives post-covid, if there even is a post-covid.

Two lonely people, brought together by a shared purpose which will have very different outcomes for both of them, hopefully part on good terms, does that sound like a happy ending?. The ending of the flick leaves the question of “what happens next?” very open-ended, as in, we can make our own educated guess as to whether they stay a part of each other’s lives or whether they move on to the next stages of their lives, far away from each other. Either way I didn’t mind spending time in their company (I vastly preferred Anna’s company to Matt’s, but what are you going to do?), and I hope that fictional baby gets to have an okay life.

Performance-wise, Patti Harrison is delightful, and doesn't lean too heavily into the contemporary bullshit that would make her seem like one of the characters in Lena Dunham's Girls, which did more to stoke the fires of intergenerational hatred than any number of articles about smashed avocado or hook-up culture. She felt real, and I think our sympathies lean a lot towards her versus Matt, who is calculated to push a lot of buttons, perhaps to the character's detriment. Ed Helms can play an annoying guy really, really easily. Perhaps too easily.

Together Together is a reminder that there are other stories to tell other than the same ones about people pursuing other people like they’re trophies, or that happily ever after is ever a real thing in our human world. People connect to other people for a whole bunch of reasons, and from that come new complications. And people can afford to be kind to each other, beyond the realities of what money has to dictate.

--
“Now I have some questions I’d like to ask you too. What’s the worst thing you’ve ever done in your life?” – um, now’s not the time, champ - Together Together