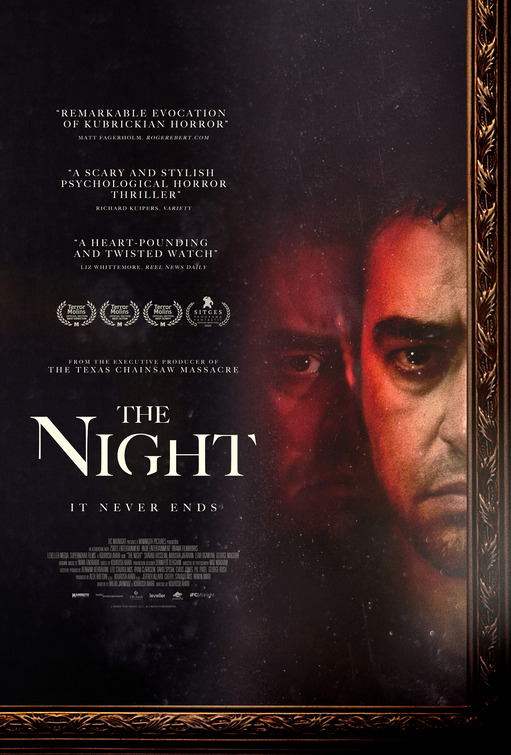 This film is scary, especially for anyone who’s ever tried to stay in a hotel with a newborn baby.

I mean, how guilty do you feel when the kid starts bawling, and it’s the middle of the night, and you’re worried that they’ve just woken everyone next to you, below you and above you? Oh man, how bad would you feel.

Hopefully you get them back to sleep okay. Shh, shh, it’s okay, I know it’s an unfamiliar environment, but everything’s going to be okay, I promise.

Of course it helps if you’re not staying in a Hotel, in California, which you apparently can’t ever leave.

I can’t claim entirely to understand the foundations of what this story is trying to say outside of the set-up of a Iranian-American couple with a baby, in a hotel where weird shit is happening around them. I mean on a metaphysical or supernatural level. Nothing is explained, no wise person comes along to explain everything in a massive exposition dump upon the audience’s ears and patience. Just – what happens happens, and our main characters react in an increasingly freaked out manner.

These characters being Iranian, and the film itself being a collaboration between Iranian and American producers, I would have to assume on some level that it hints at concepts of guilt, of sin, of unexpiated wrongs but from an Islamic perspective, or at least from a Persian perspective. I can’t claim to be an expert on Iranian film, or contemporary culture, but if this is the first American flick to be allowed to screen in Iran since 1979, then you’d have to assume certain things to be true. Iran still jails directors and filmmakers if the regime feels their work somehow insults the mullahs in charge, the Revolutionary Guard or the horrible authoritarian state that reigns.

So the films that come out of there are generally dramas, or deceptively simple stories about women trying to get into a soccer game, or children wanting to ride a bike, or a couple separating because of unspoken resentments and aspirations for their children.

The Night might have been filmed in LA, but it still has to please the censors, I imagine. Although, now that I think about it, doesn’t the hotel itself become a metaphor for the police state that is Iran since the Revolution? Random bad shit happens to you for reasons you don’t understand, and getting out or away is almost impossible?

A number of couples are having a night at someone’s house. Most of the women have hair coverings, some of the couples are fully observant Muslims (no drinking, no smoking, definitely no drugs), but others are more “Westernized”, one could simplistically surmise. And in other couples, like the main one, Babak (Sahab Hosseini) is a drinking, smoking fiend, and Neda (Niousha Jafarian) is most certainly not. It doesn’t help that she’s also recently become a mum, so even if she wanted to go crazy on the booze, she has others to think of.

Naturally, this is at first the primary source of tension / anger in the couple, as they attempt to get home. Despite clearly being the worse for wear, Babak insists on doing the driving, and Neda insists on nagging to enhance his concentration on the long journey home.

Despite the fact that the trip should only be 20 minutes, two hours later, after it seems like Babak ran something over, they just can’t take it anymore, and elect to retire to a nearby hotel, the Hotel Normandie, which is famous enough that even I know about it, and I’ve never been to LA.

When they check in, there is a homeless African-American chap mumbling something to them, a warning. It’s a classic of every genre that the creepy harbinger of doom be ignored. So not only do they not hear his warning in time, they also clutch their literal and metaphorical handbag a bit closer.

Hey! He has a name (Elester Latham), just not in the script. He’s just scary homeless guy #1. But he’ll get his moment to shine, in Farsi no less.

Despite being set in the States, the vast majority of the flick is in Farsi, which makes sense if most of the characters are Iranian, I guess. There are hints of tension, not only amongst the couples at the beginning, and within the main couple, but it is implied strongly that some or all of these people have done bad things in the past. We don’t know what Babak has done, but we can surmise. We also don’t know what Neda has done, but she tells us something later on.

There also seems to be something wrong with Babak, and I mean beyond the alleged drunkenness (he never seemed that drunk to me, and, I can assure you, I know from drunkenness). He has like a bad toothache, but maybe there’s something more serious going on, like, neurologically speaking.

He is not well. He also looks really unhappy a lot of the time, but becoming a new parent I guess is quite stressful. He’s also pretty shitty towards his wife, but we don’t get the impression beyond how he speaks to her that any of the bad things he might have done in the past have to do with her.

No, it seems like something bad he did has to do with another girl who keeps appearing, in different stages of aliveness or deadness.

Though there are some scenes of awfulness, this is more a movie with jump scares and surprising images rather than out and out gorefests and, I dunno, random decapitations. The entities the main characters are haunted by in the hotel, or the people that appear, who are clearly not who they appear to be, I think are more meant to be images of people that they feel guilty about, for whatever reasons, or should feel guilty about, but don’t, hence the increasingly violent nature of the apparitions, at least for Babak.

I also am not sure about the tattoos. Yes, this couple, to show how Americanised they have become, have an image tattooed on their forearms, in a pattern that would join together or mirror the other, but as the film goes on, I wondered if maybe the flick was just saying that Tattoos are Bad, Okay? I mean, I don’t imagine that tattoos are popular with the Morality Police who tour the streets of Tehran beating the crap out of people who are non-compliant.

At some times the tattoos look infected, or painful, so I wondered if maybe they’d been tattooed with, I dunno, drugs or something, but it doesn’t explicitly come up. I guess I was remembering an episode of The X Files where someone was tripping out because of the ergot derivative in the dyes used in a tattoo and killing people and such, but that didn’t come up here. Babak does mention at one stage that maybe the tattoo is a curse, like probably the world’s mums have been saying since time immemorial.

And maybe it is. I’ve seen some bad tattoos in my time, and maybe they are cursed, it’s hard to tell otherwise. But the horrors both do and don’t seem tied to them.

I feel like the “logic” of what’s happening is more like being trapped in a nightmare, so there’s precious little logic on display most of the time. Sometimes it seems to be their greatest fears manifesting, other times it’s (I think?) literal images from their pasts, or things they did which they haven’t owned up to yet. But I also, past a certain point, considering some of the stuff that seems to happen, wasn’t sure whether this was a shared experience, or something that was only being experienced by one of them, and only imagining what the other person was saying or experiencing.

But then that wouldn’t make a lot of sense either, given that they both seem to see at least one of the apparitions, but it’s the other one who offers the explanation (I’m thinking of the little boy that keeps calling out to them, to both of them, even though it’s only Neda who “knows” what the boy represents.

Only a fool looks for logic within the chambers of the human heart or within the script of a horror movie, so I’m probably barking up the wrong tree and setting fire to it along the way. I deeply disliked Neda’s “explanation” for why a boy was appearing to the couple, especially considering that they have a daughter who’s right there and alive, and certainly not an apparition, but I can see why it would matter for these characters. As in, from their background. Say what you will about the morality and ethics of Islam, let’s just say that there’s a lot of crossover between their stance on the rights of women to their own personhood and bodies, and the anti-choice beliefs of Christian fundamentalists.

But there is no similar explanation given for what Babak is seeing, or experiencing, or hallucinating that he has done. We get the strong impression that a) maybe he did a hit and run on someone, and never owned up to it, b) maybe seduced and abandoned a girl who offed herself, c) fantasises about killing his wife? I dunno, but being a guy, and being an Iranian-American guy, he never expresses his feelings or admits that he may have ever fucked up or been wrong in his life.

So where are we left, in the end? The ending isn’t ambiguous, one could argue, because it comes right after one of the most awful moments in any movie or story or anything you could ever imagine, which is the absolutely shitful “It was all a dream” fake out, where you think “maybe everything’s okay and none of it happened?” followed immediately by “nuh uh, shit’s even worse than you ever imagined.” So that’s nasty, but sort of a relief, but the ending doesn’t clarify what is actually going to happen, it only implies that maybe there is no escape.

I mean, Neda is told there is an escape, something along the lines of “tell the truth and the doors will open”, and she tells the truth, but Babak doesn’t so…they’re all doomed?

There’s probably a stack of stuff I missed, maybe a bunch of stuff that would resonate more with an Iranian audience. I don’t pretend to be anything other than what I am, and I don’t resent that others appreciate stuff on a different level to me. I think it was a good enough film, creepily made, but I did find it a bit tiresome after a while, and didn’t really love it that much. Babak doesn’t do much other than look intensely hungover all of the time, clutch his aching jaw, and fall over a lot, so it isn’t that great a performance, but it does finish on a chilling image that involves Babak, and maybe another Babak, that ranks up there with some of the all time great last moments at the end of horror flicks (I’m thinking most of all of the classic image from The Blair Witch Project, which is real simple but still gives me vertigo when I remember it).

--
“I'm very sorry if my words disturbed you. Have a peaceful night” – yeah, like that’s going to happen - The Night