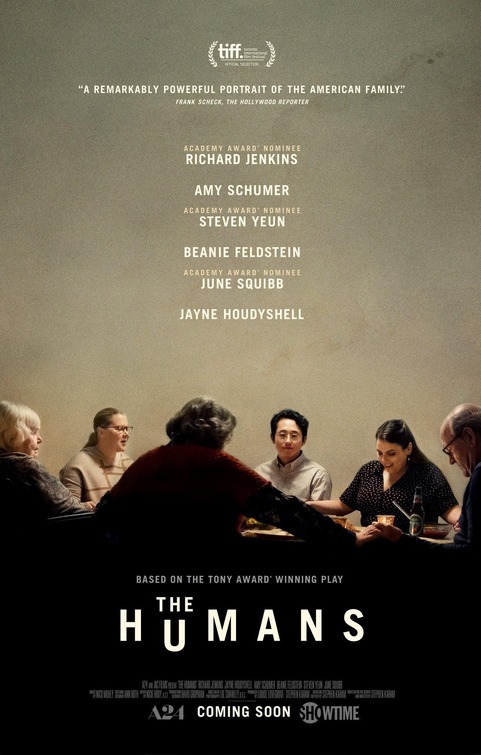 We who are about to be depressed, salute you

This flick was kind of horrifying, but it’s not a horror flick, I don’t care what any reviewer says. It’s shot like a horror flick a lot of the time, and there are jump scares, which is a bit confusing.

But this is really about a family coming together for Thanksgiving, in New York, in a cursed pre-World War II apartment that has never seen better days, and just has them talking in these jagged, awkward ways, like people actually talk rather than carefully curated monologues and declamatory speeches.

It’s awfully, deliberately mundane, but the mistake I don’t want to make is to think that so-called naturalistic performances are easy or that they aren’t acting in and of themselves. It’s hard, just as hard as the showier stuff. Imagine pointing a camera at someone and yelling “act natural!”, and just imagine the performance you’re going to get.

People talk and mumble and get distracted and wander around and check their phones and say one thing and then trail off and talk over each other and support each other or attack each other, and I guess that’s what a group of people having a meal together might be like.

Though there are revelations and such, it’s not a flick that’s building to a crescendo or with natural peaks and flows, or rhythms that we might be accustomed to.

Veteran acting legend Richard Jenkins does his thing as the Dad of the piece: Jayne Houdyshell plays the Mum, a role she also assayed in the play this is based on, on Broadway. Amy Schumer and Beanie Feldstein play their two daughters, Aimee and Brigid. Plus there’s also Brigid’s partner Rich (Steven Yuen) with whom she shares this diabolical apartment.

She doesn’t get a lot of dialogue. There’s a long, agonising scene showing how hard it is to get her to the toilet and off again afterwards in such a cramped, decrepit apartment. She’s also suffering from Alzheimer’s, so she doesn’t get a lot of coherent dialogue, the poor dear (the actress herself is obviously in fine fettle).

But everyone does what they can. People have bad dreams, and various ailments, and disagree about everything and nothing, and start saying stuff, and lose the thread. The apartment seems to be spread across two floors, and the dynamics of the afternoon or of dinner mean they’re traipsing up and down a spiral staircase or, with Momo, taking a cramped elevator down or up.

The lights keep popping out. Water distorts the walls, discolours the paint. Areas around pipes bulge and become distended. Weird noises, shocking noises abound. There’s no view at all out of the place – all the windows are frosted, and even if they could look out, the view is only of an inner courtyard, which gets no light or life. The dad thinks he’s seeing the start of falling snowflakes, and Rich tells him it’s probably someone upstairs emptying their ashtray.

The opening credits are interesting in terms of the enclosed imagery used, as if to imply that there is very little escape for these people. For a while I wondered if maybe they were trapped ghosts haunting this apartment, not knowing they were as such, and surely, surely, if you could find a way to get away, you’d take it.

But they’re not ghosts, unfortunately, they’re just sad people, sad for all the usual reasons. I mean, Rich isn’t sad now, but he does mention at one point that he suffered from depression for some years in his mid 30s.

The parents, Erik and Diedre, think this is a teachable moment. The family grew up Catholic, but the two daughters have drifted away from the Church, for the obvious reason being that the Catholic Church is a vile, immortal, corporation parasitically attached to humanity for far too long. Aimee has even more reason considering she’s gay, and for the Church gay people are still one of the only groups it’s acceptable to hate in modern times.

The parents resent the fact that their kids have no time for the Church, and even say stuff like “well, you wouldn’t need therapy if you came back to the faith” or implying that somehow practicing Catholics are exempt from depression or needing support for their mental health.

It’s a breathtaking moment in a movie devoid of them, but it’s Aimee’s measured response of “no, we don’t have depression, we just have this stoic sadness all the time” that’s pretty gutting.

But in mentioning that, it almost seems like I’ve fallen into the trap of describing something in a way that makes it sound more conventional than it actually is. There’s little lead up to that moment, except for the scene where the mother gives Brigid a gift of a statue of the Virgin Fucking Mary, and there’s even less follow through. The parents, especially the dad harps on about how his girls shouldn’t live so far away from home, but it’s not like they could move back home to live.

Their lives are…proceeding in ways that other people’s lives proceed, independent of the Church. Aimee is recently out of a relationship, seems like she’s losing her job as a lawyer at a law firm, and has some health problems. Brigid is an academic musician of some kind, but keeps being rejected, or didn’t get a grant she was counting on.

These are usual, normal sadnesses, and they come with normal, human fears as well. Aimee fears that was her last chance at a relationship, which is underlined when we view a one-sided conversation on the phone where she hoped the holidays would be an okay time / excuse to make contact with her ex, only to respond to stuff like “My therapist doesn’t think I should have any contact with you”, which is pretty sad.

There are some abnormal sadnesses as well. I don’t mean abnormal in that someone shouldn’t be sad about whatever the fuck they’re sad about: I mean an extraordinary event in the lives of this family which has left a mark permanently, as it did on many others, I guess. A reoccurring nightmare of Erik’s makes more sense much, much later, when it’s paired with the knowledge that on a certain fateful day in 2001, he thought he’d lost his daughter.

But there’s no consolation in that, or with what happens during their annual family ritual. A peppermint pig is placed in a velvet bag, and each member of the family says something they’re grateful for, before hitting it with a tiny hammer, and passing it along. It’s slightly strange and strangely sweet, but the kicker is when the dad says “I’m grateful for having this family, and I know no matter what happens, or anything I might do, I’ll always be loved unconditionally, right? Right?”

Of course then it’s time for a revelation, just as the parents are meant to be leaving, that the daughters simply cannot accept. The fucking audacity of the man…

It’s not a pleasant viewing experience, but it’s not painful, per se. I have a very low threshold for cringe stuff, and this isn’t on that level. It’s deliberately disconcerting, and never really wants us to be comfortable for too long (something stops working, or starts operating loudly, or some shock happens every few minutes to keep us offside and discomforted).

I’m not sure I really understood why. I understand that family get-togethers can be fraught experiences, but this isn’t about how they can be, or why they are, or why people feel compelled to bring up shit from 40 years ago, or how we settle back into old roles against our will where our families are involved.

It more seems to be about how a bunch of people can be sad for a whole host of reasons, and there’s not much that we can do about it. Sometimes it’s because of stuff they did or didn’t do, and some of it is completely out of their hands. And all the Church and booze and fucking in the world can’t seem to make the burden any lighter, on some days.

I guess there’s a truth in that, one that I can’t discard so easily, but it’s not that profound a point to me. I already knew that before I watched the flick, I think we all did.

It’s a strange film, and one I am not comfortable recommending, though not for the usual reasons. I guess it was disturbing in ways I hadn’t expected.

Is that a good thing?

--
“And on their planet, the scary stories they tell each other are all about us. The horror stories for the monsters are about humans.” – wait, so that makes us in the audience the monsters? - The Humans