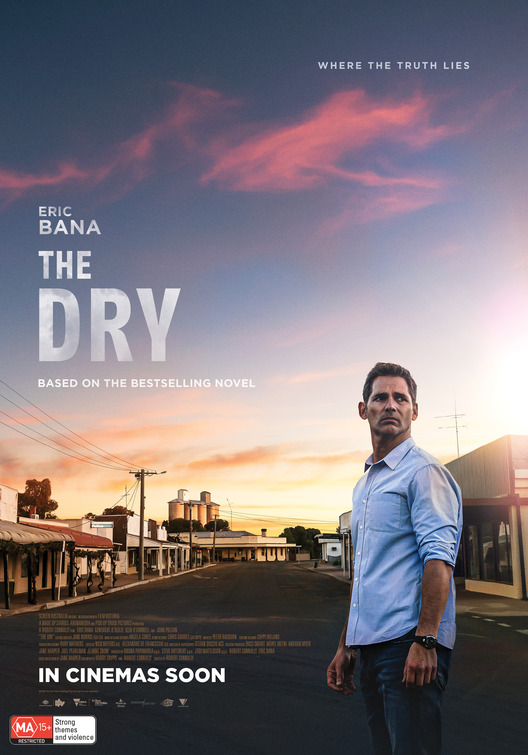 Don't look over there, look behind you. That's where the
stupid town is.

Just for something different I thought I’d watch an Australian film.

This flick, really, couldn’t possibly have any surprises for me. After all, I’ve read the Jane Harper book which sold like hand sanitiser at the beginning of the epidemic. Everyone (at least people that catch public transport and still read books, which is the sum and total of people who still read books) read that book and the ones that came after, probably.

I read that one and stopped there. Not because I didn’t like it, because I kinda did, despite how formulaic it was. It’s just that my prejudice became “well, now she’s a prisoner of her own success, and everything she writes will be minor variations on this template.”

I’m too lazy to find out if that’s actually true. Maybe I’m just afraid to admit how wrong I am (I know I’m wrong; I am somewhat comfortable with that fact).

But The Dry, despite its formulaic nature, did resonate with me, or at least the parts of me that respond to those elements of the formula. A book like this can be and has been written in every language and in every nation. They aren’t necessarily all crime stories, but all these country town or village dramas proceed in a similar fashion, because it’s a story I think most people can relate to.

They’re always stories about belonging, or being ostracised, or starting off as a part of a tiny community, and then either fleeing or being cast out, and then being forced by circumstance to revisit the past, dredge up old traumas and solve outstanding riddles. It’s great.

I fully support it. So, Aaron (Eric Bana, perfectly cast) is a guy who grew up in a fictional far west Victorian town call call Kiewarra. It hasn’t rained in Kiewarra for a long goddamn time, which is a problem, because all it does is try to grow wheat in dusty fields. It’s one of those dwindling or dying towns, but none of that should matter.

Aaron left town as a teenager, literally chased out of town, after the death of one of his friends, something that clearly haunts him still. More than, I dunno, twenty years have passed, and people still act like he probably had something to do with it.

Yeah, it’s one of those country stories, like that other superb flick set in the country by Rachel Ward a bunch of years ago, Beautiful Kate. But that was about a family destroyed by tragedy and loneliness, whereas this story is about cruel shitbags and murderous greed.

The tragedy that brings Aaron back is the murder of a family, and the apparent suicide of the person who did it, being Luke, Aaron’s childhood friend. It’s brutal stuff. A father, who murders his wife and child before offing himself.

Luke’s parents, well, mum at least, can’t accept what’s happened, and the beg Aaron, who happens to be a Federal cop, to investigate what happened.

It’s the kind of town that only has one cop, a young inexperienced sergeant (Keir O’Donnell) who is awed by the older cop from the big smoke. He is the only one impressed. Everyone else seems indifferent or actively hostile.

Yes, that kind of town. In other dramas of this ilk they show a whole town being hostile, but here they thankfully make it mostly just one guy (Matt Nable) and his senile father (William Zappa) who growl and threaten Aaron for what they claim he did to Ellie (BeBe Bettencourt).

Everyone, even people not particularly aggro towards Aaron, all think he might have had something to do with her death, back in the day. Even Aaron, for much of the flick, and because of the many evasions / lies we know he and his best mate Luke spun, seems like he thinks he might have had something to do with it. The burden of the past seems to weigh heavily on him, but it more seems to manifest in what he doesn’t do, or how he doesn’t act.

For much of the story, Aaron seems like a fairly accomplished detective, but a fairly timid soul. This isn’t the kind of crime drama where a damaged person tears back into town trying to get revenge on people that wronged him earlier in life by drinking heavily or brutalising people. He just seems like a polite, reserved man who doesn’t particularly relish digging up the past or the present, but will do it anyway. I don’t think he has anything to prove to any of these fucking yokels.

Except maybe to Gretchen (Genevieve O’Reilly), one of the few smiling faces to see him at the funeral. They have here, like in the book, an easy-going rapport, maybe a longing for the past, but there’s also the sense that they could finally spend some quality time together now that everyone else is out of the way / dead / murdered.

I can’t believe I made such a callous joke. It’s not like that at all – it just seems like they were friends as teenagers, and, after catastrophe and absence struck, are happy to reconnect as people who once spent time together. She has a kid, he has no attachments, so why not?

Well, there are a plethora of reasons why not, but anyway. As naturally as the “investigation” proceeds, everything that arises to further the plot pretty much happens accidentally, out of the blue, almost random events, and that’s okay. I don’t feel like the investigation / murder mystery aspects are as important as how all this feels to Aaron to try to solve the unsolvable past. There are a lot of scenes of him looking at where the local swimming hole was (a barren river bed now) and looking sad and confused, or out onto the barren plains, fields empty of wheat, massive properties consisting of lines etched into the dirt by massive machines.

When speaking to Luke’s father, there are these lines about how all the properties in Kiewarra are being bought up by massive agri-business concerns, people being replaced with GPS systems and remote operated harvesters, meaning there won’t even be a need for any people to stay in these towns, even if there is no water for crops, and Barnaby Joyce has drunk up all the water in the Murray Darling basin.

It’s a melancholy line, filled with regret, that probably echoes the thoughts of many living on the land, who’ve seen most of their kids, and their friend’s kids move to the cities for education, jobs, and not come back to live, only for special days like Christmas. Must be sad.

And then I thought: what the fuck is Luke’s dad talking about? Someone has to repair the machines that break down, and manage the 1001 tasks that go into running a farm, and that can’t all be done by some jerk in an office in a city with a remote control, don’t they?

It’s that fatalism of the farming community, of places that exclusively vote for the Nationals, despite the Nationals having become the Mining Party for decades, the fatalism of people for whom the shotgun or the rope in the back shed is never too far away. It’s a horrible sensibility, but it’s a comprehensible approach, and it fits within such a grim story.

Aaron continues to mope around the town, with his big city questions and his logical ways, and, yes, it manages to bring up and then discard red herring after red herring. It’s enjoyable to watch him work. Eric Bana underplays the role, which he does really well (perhaps too well), but the quiet decency and professionalism (especially in a context where most of the time I expect the protagonist to be a messy alcoholic who happily beats confessions out of people and shag everything including the furniture) he brings to the performance I actually appreciated.

It's a bit rich in terms of the dynamic between himself and the younger cop, who idolises him and has so much to learn (I doubt a country cop can afford to be as clueless as the guy seems here), and for a while they have a decent dynamic. At least until the cop’s wife (Miranda Tapsell) points out to Aaron that they can’t afford to have the town turn against her husband, because Aaron will leave, but they’re going to have to keep living here.

Of course that’s when the local sergeant realises how much he’s been used, and gets all hurt and standoffish.

That made me laugh. Aaron just can’t catch a break.

And just when we think maybe Aaron will catch a break, and at least that he and Gretchen could have a night’s respite together, this creaky plot uses that opportunity only to drop more bombshells, and then randomly solve the mystery for Aaron.

Nah, you have to accept that Aaron was always going to solve the crime, because he’s right, and to prove how great he is to these hicks that have been whispering shit about him for 20 years.

Sure, there are a lot of coincidences, but I don’t think they harm the story at all, because no-one made any claim that Aaron was Sherlock Holmes or Hercule Fucking Poirot, just that he’s fairly focussed on details, and that people caught in lies usually have a reason to lie.

Considering the horrific nature of the crime that kicks things off, it seems almost churlish to point out that the central, older mystery is kinda the one that feels more important to the film. It’s not the one that generates the action and conflict and such, but it’s the one that we know matters more.

In the book at least there were more times where Aaron wonders about his relationship with Luke, and though he is shown to be a bit of an arrogant jerk in the flashbacks who’s played an outsized role in all these people’s lives, adult Luke doesn’t really (probably can’t, really) exist in this story. Reconciling himself, and finding out the truth about Ellie’s death is the film’s and the book’s even darker, somehow, more meaningful resolution.

Those flashbacks to Ellie, and her singing of Under the Milky Way, sure they’re manipulative, but they’re heartbreaking, and I guess they have to be otherwise we wouldn’t have an inkling as to why it matters so much to Aaron, and how it’s been the central plank of his life. She makes us feel the fear, the sorrow, the lack of hope, the desire to be free of this fucking town and the horrors that remain here for her, all to no avail. Some don’t get to escape the country, and the ones who do are left to remember them, how brightly, how briefly they shone.

I really enjoyed The Dry. As a film it possibly works even better than the book, which always seemed like it was tailor made for adaptation to the big or small screen. I have no love for small towns, but I feel the same pull to belong, the same fear of rejection, the same desire to protect them from harm, the same urge to burn them to the ground for their bleakness and herd mentality (as opposed to herd immunity).

--
“Born and bred here, or forever an outsider, seems to be the Kiewarra way.” – The Dry