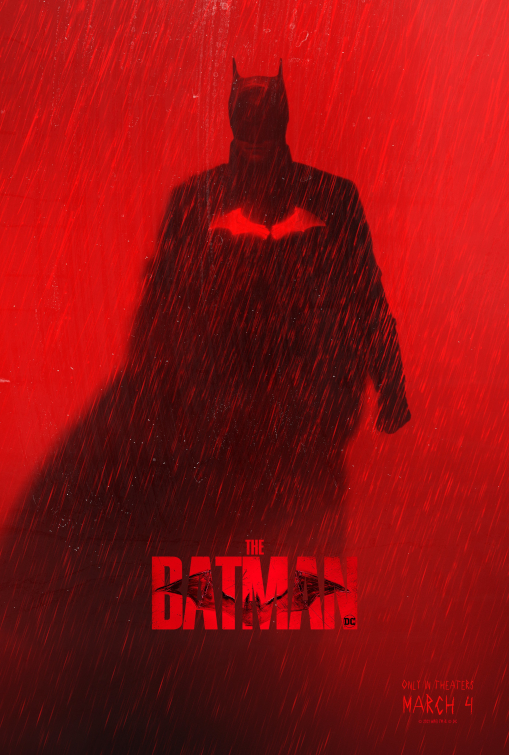 I look forward to the sequel where The Batman fights
The Man-Bat. That's an actual character, more Bat than
Man. Poor Kirk Langstrom. When will it be his time to
shine?

Something’s in the way, indeed.

I was reading an article recently, which tried to argue, probably successfully, that each time a new Batman reboot / movie comes out, it reflects something about contemporary American society.

Okay, but does that mean the rest of us did something to deserve those ones where Ben Affleck is Batman, and shoots a bunch of people? Was that our fault?

I mention the article, because there’s something probably right but also daftly obvious about such an argument. Of course Batman flicks can be said to represent something at the time they come out, but you can say exactly the same thing about whenever a new Sharknado or Tyler Perry Madea flick or when a new Jackass flick comes out: they all represent something about their “time”, plus how much money they have to play with, and what lazy commentary they’re trying to muster for relevance.

Zach Snyder’s / Affleck ‘s Batman? Batman should be able to kill crims because that’s what awesome guys do in slow motion.

I would like to give Reeves / Pattinson the benefit of the doubt, but so far what they have is a rich, isolated weirdo who wants revenge for his parent’s murder, who wears heavy emo eye makeup not because he needs to, but because he maybe still has a poster of Brandon Lee as The Crow on the wall of his bedroom, and who most people, crims cops or otherwise think is just some weird guy.

The world he fights for is one city, being Gotham, which is somehow trapped in the 1930s in its art deco architecture, 1970s New York for its filth, grimy aesthetics and fashion, and the 1990s for its music. If you don’t believe me, the slowest, moodiest Nirvana song, being Something in the Way, plays multiple times throughout the film, just in case we were going to get excited about anything.

Our intro to The Batman himself comes when a gang of youths are attacking people on the subway. Funny (in that it’s not funny at all) that this flick pulls from the exact same reference pool as the Joker does as well, for a very different effect, but from the same exact idea.

It’s almost like American cinema is trying to constantly tap into an urban collective unconscious which is stuck in a 1980s fear of being on a subway train and being attacked by a gang of ethnically diverse youths, and not having a gun with which to show the punks who the man really is.

It's set up so ominously, but it made me laugh so fucking much: the gang have dragged a guy off the train, and they’re trying to get one of their number to hit the guy as hard as he can, knocking him out, so they can post the video online.

But, hark! They hear footsteps – heavy, ponderous footsteps! They all look at the ominous darkened hallway from which the sounds emanate. They keep looking, and the slow footsteps keep on clomping.

Did I mention that this flick is 3 hours long?

It felt like he keeps clomping towards them for like 15 minutes. I am sure some scallywag will upload a 10 hour edited version to Youtube one day that solely consists of them staring apprehensively at the doorway, and the footsteps advancing, but never arriving, eternally.

This film feels eternal, in that it felt like it would never end. Batman finally arrives, and beats the shit out of the gang. What feels weird is that there is nothing fancy about how he does it. He’s just a guy in armour who walks up to people and punches and kicks them, and they punch and kick him back too.

Thankfully, this isn’t another Batman origin story, so we don’t have long training montages, or the murder in Crime Alley, and the broken strand of pearls etc, but he hasn’t been Batman for very long, it seems.

For reasons we don’t know yet, one cop, being Detective Gordon (the great Jeffrey Wright), trusts the weirdo in the bat costume, and brings him into crime scenes in order to do his observational thing. He notices details dumb cops are too dumb or corrupt to notice.

They belabor the point throughout this long-arse film that this version of Batman is the World’s Greatest Detective Batman, or that he will be one day, trying to solve a mystery about why some guy is murdering a bunch of prominent people with his mind instead of his fists and gadgets.

I am not being that glib in saying this, I don’t think, but Batman solves nothing. He notices breadcrumbs and stumbles along a convoluted plot, but nothing he does really changes anything.

I have heard tell that some or much of the plot was based on The Long Halloween story arc from the comics, and I remember how dull and tedious I found that storyline to be. Like many of the Big Event story arcs in the Batman comics, the idea is to drag the plot out as long as humanly possible, and name check almost every single member of the so-called Rogues Gallery along the way. Which means an “investigation” into a bunch of crimes can proceed like this “hmm, someone got murdered, and there was a rare orchid left at the scene, must have been Poison Ivy – but wait, there’s another murder, and this guy was wearing a hat, so must have been Mad Hatter? – no, wait, there’s a playing card, must be Joker, no, this new guy had his head bitten off, must have been Killer Croc, no wait, it was an actual alligator, so maybe the Penguin?”

And that can go on for like forty issues. In film form, it pretty much works out like this.

Batman pretty much figures out stuff only when it’s too late, and stops nothing bad from happening. In itself that’s not necessarily a bad way to have a story work out. In case I never noticed before, in most flicks the “heroes” don’t get to stop the bad guys until the end, or the end of the next sequel, or maybe the one after that. It’s just that in this flick, it makes Batman less of a protagonist, and more of a weirdo bystander to his own life story.

The Riddler (Paul Dano) is killing a whole bunch of people because they are corrupt, and because he wants revenge for being an orphan. I tell you, those orphanages have a lot to answer for.

Batman never really stops him, but also comes to realise, to his horror, that this villain thinks he’s doing God’s work, just like Batman. And when, after beating up on the young thugs at the beginning and being asked who he was, saying “I am Vengeance!”, and having one of Riddler’s goons say the same thing back to him towards the end, he’s / we’re meant to think “I think we both need some therapy.”

Really, how it comes across is “No, actually, I’m the righteous one, you guys are just, um, wrong, okay, so there.”

Not very convincing, at all. Robert Pattinson does not embarrass himself with this role, but, it has to be said, he seems to do best when he plays intense weirdos instead of ‘regular’ people onscreen. Most of the time, at least. He exhibits a very limited range here, but that’s only because I guess they want it to start off as a very limited performance, so that it has somewhere to go, perhaps.

There’s none of the social gadfly / playboy billionaire / duality stuff: Bruce Wayne is seen as just as much of an isolated weirdo as Batman is; the difference being people suck up to Bruce Wayne because he’s so rich. In this mostly dour and humourless flick, one of the only moments that registered as funny was a mustachioed cop who is abusive to Batman, sucks up like an absolute fanboi to Bruce Wayne at a funeral.

Sure, Batman has his Alfred (Andy Serkis), but for half of the (long-arsed) film Bruce is all “you’re not my real dad” or “you're not really a part of this family” until some bad happens to Alfred, and then Bruce is like “oh yeah, you’re literally the only person on the planet that cares about me”, and then looks slightly sadder than usual.

The flick, and I’m not the first person to point this out, simultaneously has too much going on yet somehow feels half-baked and underdone. It seems so fucking focused on the plot of who is getting murdered and why, and how it all ties back to the Wayne family, but then at the three quarters mark of the flick, they just decide “none of that shit that happened, with all those investigations and all those convoluted paths to the truth, and all the revelations of who did what to the other crims of Gotham, or who’s related to them, matter in the slightest”. Everything is revealed, nothing matters, though, and a final action sequence that feels like it comes out of nowhere gives a film that didn’t have that much action a lot of action, but it doesn’t feel like it has anything to do with the earlier slog of the film.

I guess it doesn’t really matter. It’s three hours where we watch a glum chap that wants revenge for his parents’ murders realises that, to do what he does, he cannot be motivated by revenge, because every nutjob who feels like they’ve been screwed over by life wants revenge, and that ain’t healthy.

It’s justice he should be aiming for, like all of us.

It’s true that we don’t need more Batman films, but we don’t really need any more films, if we’re honest. There are already too many films in existence. This one is adequate to purpose.

Zoë Kravitz is amazing as Catwoman / Selina, but she feels like she’s from another movie. That other, better movie was called Kimi, and came out on Netflix a couple of months ago.

Jeffrey Wright is great here, but again he feels like he’s from a different movie, maybe a Blaxploitation one from the 70s. I swear he calls someone a jive turkey at one stage. The great John Turturro is fine as the head of a crime family, and probably fits in just fine. It’s just that he’s a horrible, horrible misogynistic piece of shit. Unrecognisable under tonnes of makeup and probably CGI, Colin Farrell plays the Penguin as a lower level mob goon, which is funny at times but a bit dull. I am sure he will enliven the next flick with his penguin-based antics.

Paul Dano plays deranged weirdos way too well. The character’s motivation for the whole flick, though, damn, it does not stand up to scrutiny. Especially when for 90% of the flick he’s like “I’m a tactical genius, and this is my serious, righteous scheme to reveal the corruption at the heart of the city, but then nah, for my finale I just want a bunch of innocent people to die because… I’m an incel maybe?”

There are 400 other characters and plot points and probably a thousand other easter eggs but I am bored about thinking about this flick. I’m just glad that for the first time in 4 months I’ve been able to watch something and review it. Real life, no less eventful than this flick, has just had so many plot twists lately that writing about a fucking movie seems like such a luxury. So much death and destruction, so much loss.

--
“They think I am hiding in the shadows, but I am the shadows.” – ugh, what a groan-worthy line - The Batman