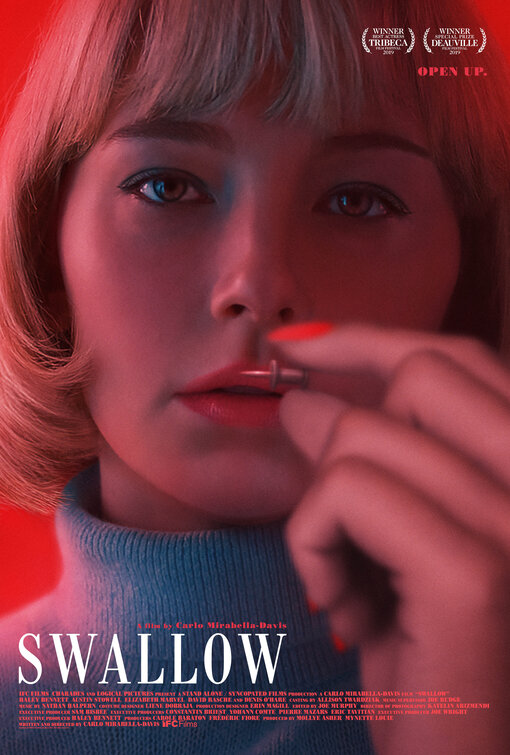 This film. Was deeply disturbing. To watch. And harrowing, too!

I warn you now, it’s not for the squeamish, oh no.

Haley Bennett, who probably to her professional detriment looks a lot like Jennifer Lawrence, puts in a performance for the ages in this gutting, in many senses of the word, character study.

In the beginning she is the very image of the perfect 1950s Stepford wife so we already know something terrible is going to happen (it’s not set in the 50s). Her perfect coiffure, her perfect clothing, the overly fussy nature of that multi-million dollar house that overlooks the Hudson River, the perfect hunky husband with his mega-wealthy parents, it’s like, what do you get the woman that seemingly has everything?

Well, you give her a crippling compulsion to eat stuff that is inedible. I’m not talking McDonalds or the fried chicken in bain maries at roadside truck stops.

No, Hunter, as she is known, swallows things. At first, or at least the first thing we see her swallow, is a marble. You’d think, well, that’s a bad idea.

And you would be right. In the times leading up to this, we see Hunter being belittled, minimised, mocked and generally disregarded. It’s not loudly dramatic, it’s just in virtually everything her parents-in-law do and say, and her husband’s jerky self-centredness. We get the strong sense that Hunter is striving mightily to be the perfect wife that these rich bastards demand, but that level of struggle is too much for everyone in general, and not just her.

Lest you think this is going to be anything like the Maggie Gyllenhaal flick from ages ago called Secretary, about a woman who compulsively self-mutilates until she gets her happily ever after in a sadomasochistic relationship with James fucking Spader, it’s nothing like that. No, Hunter’s compulsion to mutilate her insides is not played for sexy laughs at all.

It’s taken very seriously, and it’s also not meant to be a coincidence that this compulsion is escalating just as Hunter finds she is pregnant.

This is a very discrete kind of body horror. Generally in horror flicks we’re worried on behalf of characters (if we care about them at all, which is not a given) that are threatened with torment or death because we either feel for them or imagine ourselves in their place. If this is a kind of horror flick, which I’m not completely convinced it falls into the category of, the horror perhaps is imagining either what these increasingly dangerous objects are doing to her insides, or imagine how it would feel if it was happening to us.

That’s … pretty grim. That makes me feel awful and worried for her, deeply worried. When she eventually gets to speak to a psychologist who gently probes her thoughts and past for an idea as to the origin of the compulsion, Hunter admits that when she swallows these objects, and passes them, she feels a sense of control, that she has at least achieved something in a life where she feels she is not in control at all. Also, she actually likes the feel, the texture of these inedible things in her mouth.

All this is relayed to the therapist, and to us, in the gentlest terms and the quietest voice possible. Hunter’s entire vibe seems to be centred around apologising for her own existence on an endless basis. It’s as if throughout her life she was given the feeling she was not welcome in this world.

The name for this eating disorder is only used once throughout the movie, as far as I recall. Pica is a real disorder, insofar as it appears in the DSM V, but I guess not everyone has heard of it or glanced across the Wikipedia entry for it. I first remember reading the term in a really obscure novel by Gabriel Garcia Marquez called 100 Years of Solitude to describe a character compulsively eating the inedible, and I’ve never forgotten it since. It’s always stayed with me since then, because it seems so bizarre and yet so (stupidly) human, this vain attempt to control the world or our insides by ingesting the things we are told cannot be ingested. Mainly because…

No, I shouldn’t go there, it’s Hunter’s story, not mine. It is not a coincidence that she is pregnant, and the deep feelings of shame and unworthiness this brings up in her, which neatly parallel the deep feelings of shame and worthlessness that her husband and his family superimpose upon her. Any set of parents in law, regardless of their wealth, could have been used as antagonists, but in this instance the fact that they are rich and abuse their wealth and influence in horrible ways against Hunter is meant to make them even more monstrous. It’s almost unnecessary. Hunter’s war is not really with them. It’s an internal struggle.

One could almost argue that the neat and tidy way Hunter’s compulsion is tied to her past, and even beyond her past, to something that she had nothing to do with and isn’t responsible for, but is the product of, is too neat, and too narratively convenient. On the other hand, while this flick is about a character with an eating disorder, it’s not about the eating disorder, as in, it’s not a public service announcement raising awareness about a little known disease destroying people’s insides; it’s about a character who self-mutilates in her desperate desire to stay alive and in control of her own body.

Do we sympathise / empathise with Hunter? I don’t think we do at first, and maybe we’re not meant to yet. During that first part of the flick, we have only a vague sense of unease, but no understanding over something that can’t make sense to us at first. And Hunter herself, despite being in every scene, is almost trying to make herself invisible even when she is the only person onscreen, aching with loneliness. Later on, when we have a greater understanding of how someone could become convinced that they shouldn’t exist, the deep revulsion at her actions against herself give way to sorrow, and a hope that somehow she can find a way to escape.

But how? It seems impossible, yet somehow Hunter must find a way. For all her terror at losing herself in domestic servitude, or in not being able to conform with what the world demands of her, the resolution doesn’t come from strengthening the bonds with the people around her, or reconciling with a family that we never see: it comes from being able to sever herself completely from the past in a way only she can determine. And I applaud her for it. In the end she is able to swallow something that does help her out, that does give her control over her own destiny, and we are relieved for her instead of horrified.

It seems like overstating matters by emphasising the deeply feminist nature of the ending, but it was probably the most apt ending for a film as discomforting and uncompromising as this. Yet I’m reluctant to brand this a feminist flick because I know nothing about the director, but fear that he, like many other jerks in the movie industry, uses the burnishing of his “feminist” credentials to hide a truly monstrous character. Sorry not sorry I know it’s unfair but there are too many Weinsteins out there as it is.

In a lot of ways, and on numerous levels, I’m kind of astounded that this flick was ever made. Not a lot of flicks agree that motherhood isn’t the be all and end all of female existence, fewer still imply that the freedom to control one’s own body is the first freedom, the fundamental one from which all others flow. Sure, people will argue to the death over the freedom to own so many guns, or to express their inflated opinions, but we still have a powerful section of the population, at least politically, that get their mileage from arguing that women don’t deserve the same bodily integrity or political access that men take for granted.

And Swallow is what you get: people pushed so far by a society that doesn’t see them as people, just as their reproductive function, beyond which they might as well be invisible. And if swallowing jagged metal objects is the only way to fight back, well, it will have to do until some better strategy comes along.

The flick is meticulously constructed, Haley’s acting exercises supreme control, the sound design is exquisitely discomforting, all in service of a disturbing but ultimately worthwhile endeavor, if you can get past the horrible, horrible idea of internal self-mutilation, which most people probably won’t be able to.

--
“I just wanted to make you happy.” – they don’t sound like chilling words, but they are – Swallow.