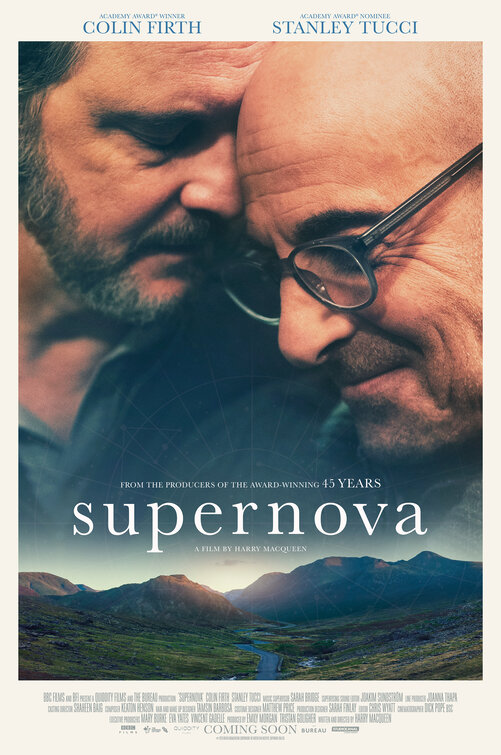 Who wouldn't want to be cuddled by these wonderful old men?

Oh boy. I felt like watching something human and intimate after enduring the shitshow that was Annette a couple of nights ago, and so I chose to watch this, knowing full well what it was about.

Let’s just say I got what I wanted, in spades and truckloads.

It’s a really simple story. No bells and whistles. If you can watch an old gay couple squabbling about minor things at first, poking fun gently the way two old curmudgeons who still love each other might, and travelling around the English countryside, then this could be your jam.

At least for about half an hour.

Tusker (Stanley Tucci) and Sam (Colin Firth) have been together for decades, and, no, this isn’t a flick about past infidelities or heartbreak; one of them is a bit ill, and so there’s a bit of a victory lap feel to their travels. Tusker, being an American writer, is still working on a novel. Sam is a former concert pianist, and this trip is a prelude to him taking to the stage again after many years off of it.

They have an RV, and are meandering their way through what I’m guessing is the Lake District, but Tusker, despite his wry humour, is struggling with dementia. Neither Tusker nor Sam are that old (both actors are 60, but that doesn’t mean their characters are meant to be the same age), but dementia doesn’t see a number: it just sees an opportunity to ruins many people’s lives.

He hasn’t lost all his words yet or motor function skills, but he feels its breath on his shoulder, and dreads what’s to come. Sam is cheery, and prefers not to face it at first, but also thinks / feels / hopes he’s prepared for what’s coming.

He knows, and some of us know, that it is difficult to look after someone whose body and mind betraying them, but in this case it’s also going to be coupled with the fact that Tusker will eventually not recognise his beloved anymore, let alone himself. Tusker is still a fucking smartarse, though. There’s a brief bit early on where he deliberately and gratingly embarrasses Sam when a waitress seems to recognise him from the telly, and Tusker adamantly insists that Same has to give her an autograph.

At this stage of the flick, because we have no idea who “Sam” is in the scheme of things, I wasn’t really sure what was going on, on the off chance that the waitress was a real waitress, and maybe wondered if “Sam” was that actor who played the brooding Mr Darcy a bunch of times.

But nah. Under questioning from a mortified Sam, Tusker admits that when he does it, it’s probably supremely irritating to Sam, but at least half the time he finds it immensely funny.

Well, that makes it all right then.

It’s only after that point that they explain (to us) through dialogue that Sam is a pianist of some renown, and that their trip together will culminate in a concert. Although, really, it’s not the concert Sam is concerned with, it’s the plan he has for how the two of them are to live afterwards.

He has one plan, being something like assisted living, with Sam doing the bulk of the high level care, as it’s called, with some help as well.

Tusker has his own plan, but hasn’t shared it as yet, but it’s there, sitting patiently like a hidden blade.

They are doing a bit of retracing of steps, returning to places they’ve been to and enjoyed in the past, which also involves a trip back to Sam’s childhood home, where his sister, husband and niece live. They are very welcome there, though the sleeping accommodations, involving Sam’s childhood bed, probably could have been rethought. Two grown men sleeping in a child’s bed…

There is, throughout, this mixture of honesty about what’s coming, and tiptoeing at the same time, and some very mild gallows humour. Sam’s sister Lilly (Pippa Haywood) has love enough for them both, and somehow seems to know it will be the last time she sees Tusker, at least in this form. There is a surprise party, in Tusker’s honour, but it’s a surprise to Sam, not Tusker, who was involved in planning it. Friends of theirs they haven’t seen for a good long while come to see them because…

There’s something heartwarming and something desperately sad about these sequences. Do people do things like this in the real world? I’m sure they must, but, if a friend or family member of mine were about to embark the supreme awkwardness of it all would split my head in two. Or would I be grateful for the chance to celebrate the person?

As is remarked upon within the flick itself, it’s a lot like having a wake or funeral for someone when they’re still around, and that strikes me as a deeply terrible thing to contemplate. I regret that I have had to go to funerals and wakes (in that I have been saddened by many people’s deaths, some too soon, some not soon enough). In most cases it was a shock when it happened, whether through accident, unexpected medical condition, or, in the worst cases, suicide. Even in the cases where it was dementia that finished someone off, it was nothing like what’s depicted here.

Raise a glass, share an anecdote, an inside joke, and then bid a sad farewell? It’s too much for my poor heart to contemplate.

Something someone says mentions about how incapable Tusker is of writing now prompts Sam to check on something Tusker was doing, which leads to a set of revelations about how different their plans are for Tusker’s remaining days.

Also, on how many of those remaining days there should be.

The performances are simple, beautiful and extraordinary. At no stage did I actually confuse either of these cis male hetero actors for an actual gay couple (despite both of them having played many roles as gay characters in the past), but there’s a gentleness there, a lived-in comfort, an ease which they get across quite easily. Giving naturalistic performances is anything but easy, but they’re both old pros and great in these roles.

And both have lived enough of life to put such genuine feeling into their performances without having to overact or indulge in histrionics, justified as they may be. Stanley Tucci lost his wife to cancer in 2009, after years of battling it, and a few days ago I heard Tucci himself has been battling cancer for the last three years as well, including when this film was being made. He didn’t say anything publically at the time, but it’s impossible for me to think there isn’t some of that dreaded mortality in the performance, no matter how different living with cancer is from dying from dementia.

And Colin Firth, well, he must have known too, but enough of us experience losing parents, losing family, losing loved ones for his agony to be deeply felt.

The agony I’m talking about is how determined he is to look after Tusker for as long as he can. He’s absolutely determined. He’s adamant. But he’s also terrified. This is all believable to the audience, because it has to be an agonising struggle to contemplate, on top of the reality that eventually, after months or years of misery, you will lose them anyway.

The fundamental fight between them is between the concept of whether Tusker has the right to diminish or go out on his own terms, in theory sparing Sam, but further sparing himself the indignities that the ravages of dementia will bring. Or should Same have the right to look after Tusker until he can’t, anymore? I’m not even arguing about whether it’s “right” in a moral sense, or the ethics of it, but about how it feels for these characters, how it would feel for any of us to have to go through this. This section is emotionally painful, but I think it has to be, even more painful than the brief argument we get to see.

The last part of the flick raises a very thorny, impossibly thorny issue, and while I feel like the ending is a bit of a cop out, it’s possibly earned that kind of ending for these characters. We don’t want to watch them suffer. It’s not that kind of film. For us, though, it’s giving us a kind of ending and closure that I don’t think we deserved. But I guess we want some comfort, rather than devastation. It lets us off the hook too much, I feel.

The very last scene is of Sam playing a piece by Elgar, and of course it’s Firth himself playing the piece, quite well I thought, no stand in for Colin Fucking Firth, eh? It brings this heartfelt, gentle flick to a close, and all we’re left with is a bit of sorrow, and maybe some hope that Sam will still be able to find some joy in life, even with everything he’s lost.

I did love the film, or at least loved watching the film, even though I don’t think it’s that strong in the way it cops out. It is about universal themes, though, and it will hit harder for those of us coping with illness of loved ones. Supernova – so brief, so bright, so final when it’s gone.

8 times I wonder whether life is just a joke and death is a sick punchline out of 10
--
“You're still you Tusker. You're still the guy he fell in love with.”
- “No. I'm not. I just look like him.” - Supernova