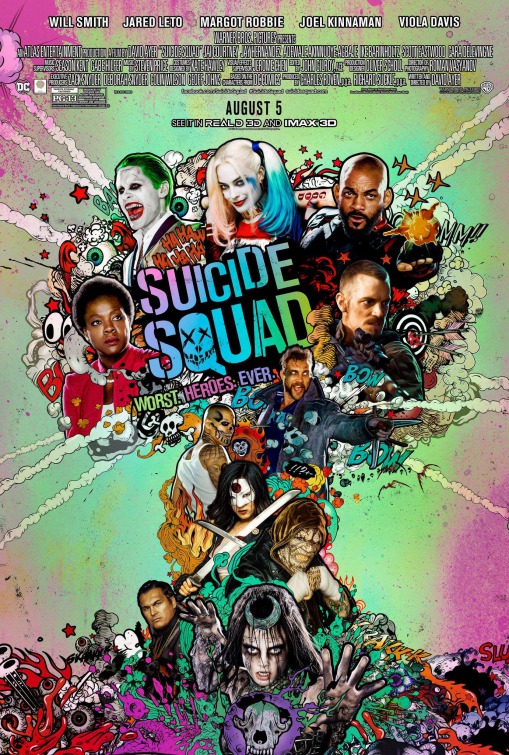 No, wait – And I thought Batman V Superman: Dawn of Justice was a piece of shit…

Suicide Squad is a whole other unique piece of shit. It’s terrible, oh so terrible. This is the standard met where intelligent people make movies for people they see as being irredeemably stupid.

Oh so many aspects of this movie are terribly ludicrous. Sure, it’s logically possible to make arguments about a whole array of movies and whether they should exist or not. Knowing that this is based on a comic book doesn’t make this make any more sense as a premise. Even, wait, maybe I’m contradicting myself, even if I buy Amanda Waller’s (Viola Davis, who is excellent in this but it’s not enough) plan as being a necessary one, how is it that it makes any sense that these particular morons are the ones you would force into action in order to save the world?

Yes, yes, I understand The Dirty Dozen style premise. I understand it because I’ve watched The Dirty Dozen a bunch of times, and I’ve seen a stack of other films that ripped the idea off as well. There’s nothing new about it under the sun, being this sun, or any of the other suns around the galaxy around which planets inhabited by comic book geeks orbit.

When a comic book company does it, it’s because they hope nerds, being nerds, will be turned on simply by the mash-up itself, by the combination of names. When you do it in a movie, you’ve got to hope there’s a bit more to it than just “the nerds will love it, it’ll be just like Guardians of the Galaxy!!” which this transparently apes.

Since this isn’t a bunch of heroic types lumped together, it’s meant to be, in the words of the woman who forces these circumstances together, the worst of the worst who can be leveraged into doing the government’s dirty work.

Like, not only do they have to be really badass, but they have to have something that regular shmoes don’t have; some ability, you’d have to think, that necessitates their being pressed into service.

This completely makes no sense when you see which ‘villains’ are press-ganged into doing Waller’s bidding. There is a guy with a boomerang, called Captain Boomerang (Jai Courtney). His power, as far as I could work out, was alcoholism. He can smash a tinnie in seconds flat, but buggered if I know how that’s meant to work in a situation with some superpowered monstrosity trying to take over the world.

There’s some guy who can shoot people, called Deadshot (Will Smith), who seems to be very accurate in his shots, but, c’mon, he possesses an ability that, being American, he shares with virtually every single other gun-stroking Second Amendment worshipper. So, yeah, that’ll come in handy fighting the next evil Superman.

That’s how not-very-secretly-evil Amanda Waller sells her scheme to the vague government toadies: what if the next Superman who comes along isn’t a good guy or girl? What then? Well, she asks for the funding and the authority to bust out ‘the worst of the worst’ when times are tough in order to take down the next superhuman threat.

Superhuman, as in, some alien or magical being that conventional forces couldn’t fight against.

There’s Harley Quinn (Margot Robbie), whose ability seems to be wearing short shorts so short that villains and allies alike get perpetually distracted enough for her to whack them with a baseball bat. And she speaks with that 1930s gangster moll accent that would give Meg Tilly a headache.

There’s some guy who looks like a crocodile and his superpower is… There's a guy with some guns who can shoot stuff, a girl with a sword… There’s a guy who dies within minutes of being introduced who can - I dunno – climb ropes or something?

There are girls at my daughter’s Girl Guides troop who have a more formidable skill set that this bunch of losers. And of course there’s the constant threat of an appearance of The Joker.

Now, I don’t know what the people making this flick told Jared Leto, sorry, I meant to say Academy Award winning Actor Jared Leto, about what role he was going to play in this flick, but you can kind of sense that they got this sinking feeling after the first day of shooting. It’s not just that he’s a terrible Joker. It’s that he’s a terrible anything that you care to call him. There might have been a fear out there that he was going to imitate Heath Ledger a bit too closely, but that fear not at all, not at any way, came to pass.

Good Lord is he fucking terrible. He’s that kind of terrible where you feel embarrassed for the actor, in that he thinks he’s being Hannibal Lecter from Silence of the Lambs, and what you’re seeing is Ricky Gervais from The Office.

But you can’t tell Jared Leto that he’s being terrible, in the same way that you, a pissy little director, can’t tell Will Smith that how he’s acting is completely at odds with the kind of character he’s meant to be portraying. What you do instead is just start sweating that particularly shameful kind of sweat that comes with feeling yourself failing in real time, right in front of your own eyes, and yet you keep yelling “Great, that’s just great” after each take.

The way that the Joker and Harley are introduced is a particularly perfect example of just how nonsensical this endeavour is. It’s a complete encapsulation of everything wrongheaded about this flick and how it was never going to work.

Mind you, it’s not like the people involved have talked to me about it, so what do I really know.

Joker sits in a club, could be a strip club, basking in his own opulence / crapulence as some kind of crime lord. Seeing as he’s (the actor, not the character) chosen to wear these weird metallic dentures, everything he tries to say comes out with some difficulty. But that’s not the worst of it.

Harley dances ‘provocatively’ in the background, as the Joker and some other crime boss (played by rapper Common, who has one of the greatest bass voices ever since Barry White) with tattoos on the sides of his head. What are they talking about? It’s not like it matters. Probably some random gangsta shit. Common’s character (called Monster T, not that it matters) is clearly bending the knee and making obeisances where they are due to the Clown Prince of Crime.

But then Joker tries to convince Monster T to have sex with Harley. Bit uncomfortable. Not sure where this is going. Monster T awkwardly, not wanting to cause offence, wisely demurs. “Nah, she’s your woman, that ain’t right.” Which he has to repeat several times.

Now, I’m not always the greatest at picking up the motivations of characters in murky melodramas. I have no doubt, since the character in all its forms is happy to commit any and every crime, and has killed more people than cancer and seatbelts combined. But what the hell is Jared Leto doing here? I don’t mean the Joker. The whole scene plays out with Common and Margot Robbie looking progressively more confused as Leto does and says more dumb shit. It ends with him shooting Monster T, and you have no idea why. And then you shrug, and hope the rest of the flick is going to improve, and it doesn’t, and then you start to blame yourself, and that never helps anything…

If all he wanted to do was kill Monster T, why didn’t he just shoot him from the start, and not passed his entirely objectified girlfriend around like she’s a joint or a wet wipe or something.

The ultimate big bad of the piece is terrible too, which helps nothing. An evil ancient Enchantress played by a skeleton (Cara Delevingne) decides she’s going to kill everybody in the world. She resurrects her just as evil brother Incubus (played by Nobody Cares) and then says “Together we will rule the world”, and so they build a machine to kill everyone.

I guess they just don’t like to think too far ahead, just like the ‘heroes’ who intend to kill her brother with a bomb under the floor. I guess it’s super, super lucky that he didn’t walk around at all in the hour or so that it took to set that up, thereby negating the minutes and minutes of thought you put in to your masterful plan. Lucky, aye?

Oh it’s terrible. It’s certainly worse than Batman V Superman. I didn’t think that was possible, but it is. I don’t give a shit if this made nearly a billion dollars, because even with a few of the solid points the flick possesses (like Viola Davis, and virtually nothing else, I mean, she’s awesome), the greatest problem is that it’s just not funny.

When it comes to humour, it’s as starved of laughs as Batman V Superman. For all its flaws, possibly the worst moment of that previous flick was this inexplicable response when superhero turns to superhero and says “I thought she was with you.”

Whenever I hear a line of such laziness in a flick upon which hundreds of millions of dollars were spent I despair, I truly despair, and look forward to the cleansing fire that will come to the world once President Trump finally seizes the reigns of power.

That kind of lame, tin-eared, stonkingly obvious and inert humour pretty much permeates all of Suicide Squad. Sure, DC thought they could go Guardians of the Galaxy by corralling a group of C-listers into one place, but then they forgot to get them to do or say anything funny. Oh, damn, sorry, next time we’ll remember, promise.

The better actors come out of it all right, or at least embody something close to characters, but it’s a complete failure as far as I’m concerned. It delivers no action that looked decent, no memorable villains in a flick overflowing with villains, no humour that made me laugh and barely anything worth remembering other than that this was all allegedly worse before the movie was recut to make it “funnier” and to remove as much of the Joker’s footage as possible.

Fucking hell, imagine what the first edit was like. I saw this twice, once sober and once drunk, and neither state helped.

Terrible, no good, very bad shitty movie. I await the thousands more that will come in its wake.

--
“In a world of monsters, this is the only way to protect the country.” – yeah, with boomerangs and short shorts – Suicide Squad