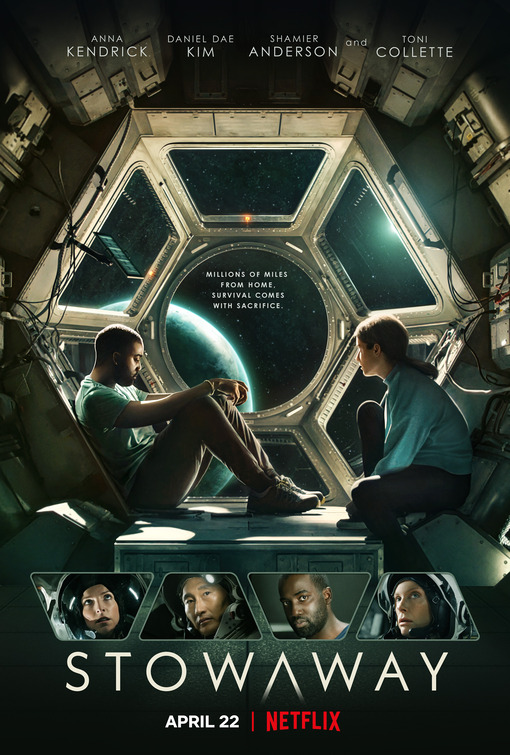 One of us ain't leaving this room, and it won't be me!

Stowaway is not really the kind of thing you expect to watch on the telly, at the movies or on a streaming service. There are no explosions, people speak calmly to each other. No-one gets shot or stabbed with a lightsaber. No aliens chomp off anyone’s faces.

It’s science-fiction, I guess, but it tries to be depicting space travel, or a mission to Mars, with technology we’re used to seeing from “real” NASA footage, or the International Space Station. Believable science of today, rather than magic science of the future.

I’m no rocket scientist, so I have no idea how accurate any of it is. Three people, three astronauts, set out on their mission, 2 years round trip to Mars, with the eventual goal of having a permanent manned base on Mars.

The Commander (Toni Collette) is Australian, for no other reason other than that they thought it would be okay. A biologist (Daniel Dae Kim) who’s going to be experimenting with algae, and a doctor (Anna Kendrick). They all get along fairly well. They’re going to be together for two years, so you would want them to be chill with each other.

Instead of always talking to NASA or to Houston, with their problems, they talk to Hyperion. In one of the grand gestures of complying with the current milieu, it’s possible it’s a corporation, like SpaceX and Virgin Blue and whatever Jeff Bezo’s space company is called.

You know, those companies billionaires start in order to thrust their proprietary phallus-like rockets into the stratosphere, just to find somewhere new to fuck up.

These astronauts aren’t like that. They’re calm scientists, or, in one case, a doctor, and they’re all about doing what needs to be done and following procedures and listening to every order given by Hyperion back home and following it.

I don’t think it’s meant to indicate compliance or obedience on their part: not too dissimilar to the relationship between the astronauts in space in Apollo 13, and the NASA nerds back on Earth at Houston in mission control, there are too many variables for three people to cover, no matter how adept.

That’s what you need the legions of nerds to figure out for you.

Thing is, though, this isn’t a situation where the ingenuity of scientists or the collective action of oodles of people will change the result. This isn’t a story about the triumph of American courage or American values or Tom Fucking Hanks.

This is a story where Science can’t magic up a solution to an impossible problem, and when all avenues are exhausted, someone might have to be sacrificed for The Greater Good (the greater good).

Sorry, couldn’t resist a reference to Hot Fuzz, though I did resist typing “crusty jugglers”.

There is the crew of three highly competent peeps on their way to Mars, but what they don’t know is that through some kind of accident, there’s another chap on board.

The craft has oxygen and supplies and such for these three people. A fourth person throws everything out of whack.

Not only that, but the manner in which this extraneous jerk somehow got packed away with all the other equipment leads to a carbon dioxide scrubbing piece of equipment being destroyed.

So unless they find a solution, not only won’t that fourth person die, but everyone else as well.

These are competent, calm people. The newcomer, Michael (Shamier Alexander) is pretty confused, but is also pretty quiet and happy-go-lucky.

In a different kind of movie, he would turn out to have done this on purpose, because he feels space flight is an affront to the gods or something, or because he really demanded, like Bezos or Richard Branson, to go instead of someone else.

Or, if Stowaway went the baffling way Danny Boyle’s Sunshine went all those years ago, as scripted by Alex Garland, the plight of a group of scientists trying to save all life on Earth by restarting the Sun wasn’t perilous enough, so in-between trying to complete their mission, a fucking serial killer would pop in and starts trying to kill everyone.

There is no serial killer, no added jeopardy beyond a group of people trying to figure out how to survive. At first they hope that if they do the things they’re good at, all will be well. Or, at the very least, if they do what they can, eventually the big brains back on Earth will figure out the solution. There is always meant to be a solution. Given enough time and inspiration and luck, all will be well.

What happens is, without too much fanfare, all the options start to fade away, all the alternatives don’t pan out, the moments of inspiration fall flat, and the terrible choice keeps being reinforced: for the three to survive, the one must be sacrificed. If the fourth remains, all four die.

It’s a cold kind of equation.

From being primarily about science and coping with the difficulties of surviving in space, it at least for a while becomes a story about the ethics of asking someone to kill themselves in order to save everyone else. As the commander of the mission, Toni Colette’s character is apologetic but practical. When she’s told a date by which the fourth interloper has to be gone by, she’s seems the type of person who’ll say “sorry, but…” before stabbing you with a pair of scissors. David, the botanist, seems horrified, but also values his own safety over another person’s life, even if he doesn’t’ have any particular animus towards them.

Michael, himself, the guy they’re asking to off himself, seems horrified but resigned. In trying to think of reasons why he shouldn’t be offed, he can’t really come up with anything other than that he has a disabled sister back home who will miss him terribly. David has a family, and OBVIOUSLY he deserves to live. Because only single people should be sacrificed to the gods of convenience.

But what about Zoe, the ship’s doctor? This is where the overwhelmingly ethical nature of the argument is expressed, or at least through whom the argument is made: it’s one thing for a person to volunteer to sacrifice themselves in order to save the lives of others – it’s a different kettle of stinky fish to tell someone, or nominate someone to kill themselves in order to save the group.

It gives the flick an ending, heroic at that, of sorts, but I have to say that the film kinda cheats. It creates a scenario by which a perilous attempt outside of the primary vehicle presents some kind of hope, but out of nowhere a danger appears (a foreseeable one, I’m not arguing it’s like murderous space piranhas swooping out of an asteroid or something) which allows someone to sacrifice themselves nobly but really seems a bit contrived considering how much danger they were already in.

I have some quibbles with that ending, but I guess it’s appropriate for this kind of story.

It’s also not particularly exciting. It portrays survival in space as being hard, grinding work, as opposed to an adventure, and I can see a lot of people complaining that the flick is deliberately boring. In fact, I have seen such complaints, and to those complainers I blow a raspberry in their general direction.

Though this might seem to be like the “realistic” science fiction of stuff like Gravity or The Martian it’s really not exciting, not action based like those are, nor does it have the intimacy of the first or the “we’re all in this together” feel of the second, with the whole world watching.

It’s nothing like those. The performances are uniformly excellent, especially the exasperated Toni Collette, but especially Anna Kendrick as Zoe. She brings her charm and humour to a role that doesn’t seem like it would require it, but definitely benefits from it. Daniel Day Kim is solid, too, but for much of the flick he seems baffled by what he’s doing, or how he ended up on set. The guy playing Michael, the stowaway of the title, doesn’t really stand out, but I guess he does okay.

Stowaway – a film made for an imagined audience that likes movies set in space but without aliens, explosions, conflict, excitement or Tom Hankses. Imagine that.

7 times I too would sacrifice myself, but only for a new jet ski out of 10

--
“Guys, this is not a call for a solution. The entirety of Hyperion is down there trying to figure this out. I'm only telling you this because I need you to be mentally prepared for what's gonna happen.” - Stowaway