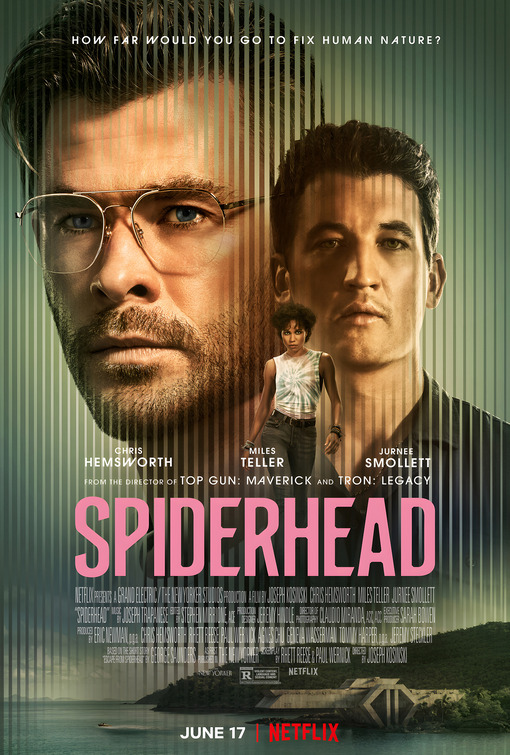 Nerds, what a pair of nerds. Of course Hemsworth
is a sociopath. I mean, look at those glasses

One of the most chilling things I’ve ever read was on the summary for this flick on Netflix. Let me get it word-for-word, so that I can convey the absolute horror of these words belonging in the same sentence:

“From the writers of Deadpool based on the George Saunders short story.”

That’s like getting on a flight and finding out that the pilot is going to be Boris Johnston, who despite never having flown a plane before is sure he can do a bang up job.

George Saunders is an exquisite writer of short stories, books, IKEA catalogues - anything he writes is pure gold. Letting two screenwriters, possibly using mountains of cocaine in order to stay motivated, attack one of his stories should be considered a literary hate crime.

I genuinely remember reading the short story this is based on, having picked up Tenth of December back in the day when everyone was buying it but few people were actually bothering to read all the stories inside it. This story, Escape from Spiderhead, stood out as one of the more memorable ones.

Within the story, a prisoner volunteers to be experimented on by drug company goons. The drug reps are unseen, bland, corporate functionaries. Their testing is apathetic, doesn’t care about the crims or their longevity at all, and just about getting results.

Despite being science fiction, obviously, with chemical tech significantly ahead of where we are today, it was less about whether people should be conducting experiments like this on people, regardless of whether they’re crims or not, and more about the limits of what people will accept, will comply with.

In this flick, well, they’ve been given an inch of a good story, and they’ve turned it into miles and miles of opportunities for many, many bad ideas to come to the fore.

I did not read news stories about this, or even have to look it up, but wherever the flick is set, it was clearly filmed in Queensland. I mean, the interior shots could have been filmed on the moon, but the outside shots are clearly the Whitsundays.

And there’s a scene where the main character is hooning down a country road, and that was so clearly Australia that I could feel it in my bones.

Who’s going to say no to Hemsworth, eh? Global box office behemoth that he is, mountain of quivering Queensland beef that he is, certainly not you.

Miles Teller, who’s the actual lead character, is certainly not in the same boat. His career started off blazing, as a teenage alcoholic in The Spectacular Now, and then with an early pinnacle in Whiplash that he acted the absolute fuck out of but didn’t get as much acclaim or as many awards as JK Simmons. Then he started, if I recall any of the tabloid bullshit, fucking around and finding out that maybe people’s tolerance for his bullshit wasn’t infinite.

Now he’s lead in this, and in the Top Gun sequel, so he’s probably back in someone’s good books.

His face and head seem to get longer every time I see him in something. He also has a long, long scar on his face, from a nearly fatal car accident in his youth. He’s kinda aging into his face, which is probably a good thing.

He also lost his best friend as a teen in a different, fatal car accident.

I mention this because this character of Jeff that Miles Teller plays, is in jail because one night at a party, he hops into his car with his friend and goes hooning, resulting in deaths, multiple deaths.

That’s a fucked up thing to get an actor to do, reliving his own past traumas, perhaps just like the character does.

He feels bad about it (the character), was jailed for it, and when the opportunity arose to go to a lower security place and be tormented with chemicals, he leapt at the chance.

It’s not for money (he don’t get paid), or the perks; it’s because he figures he’s a piece of shit and deserves every bad thing that may happen to him.

The people in the booth, including a very awful, faux cheery guy called Steve (Hemsworth), decide what they’re going to be testing and how. The people being tested, all crims, all have to give their permission for it to happen. They have to verbally say “acknowledge” to indicate their permission for what is about to be done to them.

So. Two people sit in a room. They’re both guinea pigs. Male, being Jeff, with a device implanted in his lower back with ampules of various chemicals. The female, Heather (Tess Haubrich), sits there bored, but with the same device. They are asked by Steve to rate each other’s appearance. He awkwardly gives her a high score, she dismissively gives him a low one.

After they both give their acquiescence, a drug they call N-40 is administered to both of them. Within minutes, they are fucking like crazed weasels. When they eventually collapse against each other, basking in each other’s post-coital glow, they genuinely tell each other how much they love each other.

Then the drug wears off, and they feel nothing for each other whatsoever.

I checked – the drug isn’t alcohol.

This level of experimental psycho-pharmacology shows us that this company, and this cheesy 80s music obsessed jerk CEO, are not interested in healing people with long covid, or curing cancer. They’re looking specifically at developing drugs they can market to people to change how they feel.

The next day the experiment with the love drug is repeated again, except this time it’s Jeff and a different woman, who looks to be a recovering meth addict. Same drug, same result.

So the drug clearly works. But Steve Abnesti of Abnesti Pharmaceuticals has grander plans.

Why would…who would develop such a thing?

Steve Abnesti, that’s who. A superficially charming and very obvious sociopath who doesn’t see these test subjects as people, he is adept at manipulating people even when he doesn’t need anything from them. He does it because he has a perpetual need to people in their place and to be grateful to him.

Hemsworth plays it (I think) with a nod to the insane main character who’s also obsessed with the blandest of bland 80s music in American Psycho assayed by Christian Bale. The character is an absolute nightmare. The performance is a solid one, but he’s such a fucking loathsome character.

What he is comfortable with doing is meant to be chilling to us, and it is.

The turning point of the short story was a circumstance where the main character, forced to administer the hell drug Darkenfloxx to one of the women he previously was compelled by chemicals to have sex with, elects a different path by which he’d rather annihilate himself rather than hurt another person for no reason.

Part of that, or at least the part that works is that Jeff, even in this facility, has something of a relationship with another inmate, being Lizzie (Jurnee Smollett). She, too, has committed some unspeakable crime, but she and Jeff have no illusions about what pieces of shit they are, or that they don’t deserve what’s happening to them.

The thing is, though, unlike in the story, evil corporate overlord Steve Abnesti doesn’t give a fuck about these other drugs he’s testing. He’s testing something else, because his plans for world domination extend far beyond developing and trademarking some drug that people will be able to get on prescription from their local Chemist Warehouse.

He wants to find a way to make people go against everything they believe, every instinct for self-preservation, and every impulse, for those who still possess it, not to hurt other people.

That’s some dark, dark shit. The problem is, those kooky “from the screenwriters of Deadpool violating the short story by George Saunders” turn the last third of the movie into a fucking cartoon, a ludicrous, absurd, shameful, risible cartoon.

The ending to this could not be fucking dumber or goofier if it tried. Hell, it couldn’t be goofier if I’d written it.

There’s two-thirds of an okayish flick here. That’s more than most.

I really associated with, related to whole bunches of the stuff Jeff and Lizzie talked about or thought, however expressed. I think they give really strong performances, both Teller and Smollett, and they’ll continue to do great work in other films that a Hemsworth isn’t in.

There’s another character, the CEOs offsider, Mark (Mark Paguio), who sees the prisoners as people, who is horrified by what they do, but keeps doing stuff anyway. When Jeff asks him why he does what he does for the CEO, Mark pathetically says “There are so few geniuses…” He knows it’s wrong to be in thrall to such a terrible Elon Musk-like ego monster, but he can’t help himself. Until maybe he can.

I wanted to love it, but fucking hell, that ending. Ugh. It’s almost like they read the short story but had no idea what Saunders was trying to say about people, about humanity. Or at least that’s how it seemed to me.

--
“Can I Get You Something For How You’re Feeling?” – I’ll have 2 shots of the love drug and maybe one shot of the Darkenfloxx, please - Spiderhead