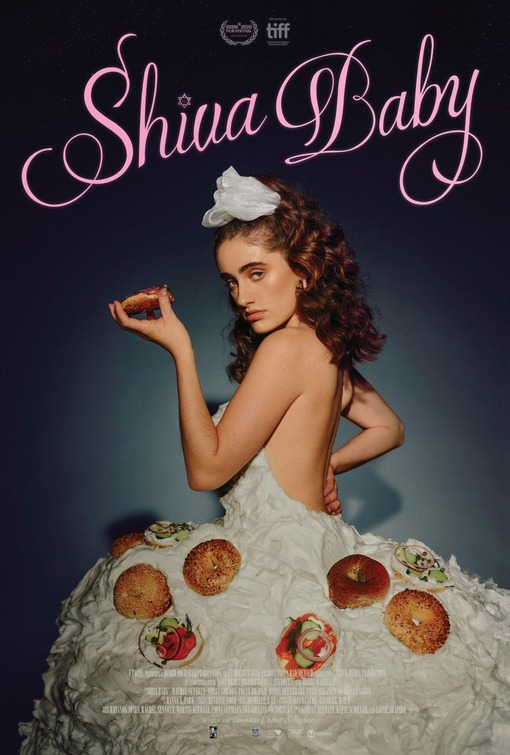 Healthy and empowering all at once, naturally

Films can be funny and excruciating: It’s a whole sub-genre of comedy, sometimes called cringe comedy. I am not so great with it, because movies about the comedy of social awkwardness / the cringe can render me contorted and tormented and incapable of appreciating any aspects of the production if I’m twitching on the ground with my fingers over my eyes.

Shiva Baby isn’t cringe-comedy per se, but it is fucking excruciating in ways that are sometimes pretty funny. What’s funniest for me is not the film itself, but what prompted me to watch and review it.

I had already heard about the flick when it had played festivals and received some pretty positive reviews. One thing that stuck out to me, that gave me a bit of pause, is that there were a fair few male reviewers making the case that the film’s “sex positive” main character was a refreshing change (not entirely clear from what), and that they appreciated the nuanced take on millennials and their approach towards the contemporary complexity of sex and relationships in this brave new digital age.

That kind of shit rings all sorts of alarm bells for me.

In a different context, I was reading a review not just of this movie, but of another, in an actual, physical magazine. You remember them? They had glossy photos and rectangular pages and you had to sit there and absorb the words instead of scrolling to the end for the “too long, didn’t read” summary.

In this magazine the reviewer, also male, lamented the existence of, and the job requirement for them to review, the latest Fast and Furious 9 movie. In this contemporary world where millions have lost their lives to a virus, millions more have lost their livelihoods and safety, lamenting the fact you have to sit there for a couple of hours and watch some nonsense, and then write about it, is the height, the very fucking pinnacle of privileged luxury.

Beyond that he lamented living in a world where FF9 is vastly more popular, more enjoyed by the filthy masses than, you guessed it, films like Shiva Baby.

That Shiva Baby exists in the same kind of world that can also produce Fast and Furious films is why this world is such a rich tapestry of different experiences and ideas. That less than 1% of the same people that will see FF9 will ever see a flick like Shiva Baby is perhaps sad, but more people perhaps can relate to the adventures of lunatics with cars in space than with a young Jewish woman in New York who doesn’t know what to do with her life and who thinks extracting cash from a sugardaddy is empowering and a path to self-knowledge.

Which is sad, I guess, and probably what that reviewer was getting at, since most of us probably have more in common with the main character here than we do with Vin Diesel or John Cena and whatever characters they might play.

Danielle (Rachel Sennott), as the movie starts, is just finishing things off with some chap as her phone rings. She gets up, changes some clothing, checks the phone, then has the most awkward embrace / conversation ever with the chap who, after a long painful pause, coughs up the cash necessary for this encounter. No, this isn’t your usual exchange of goods and services for cash – this is the app-facilitated exchange of money (for law school?) after mutually “enjoyable” sex between two “equals” in a consensual relationship, which somehow comes off as even more creepily paternalistic than the street / brothel version of this ancient transaction.

The phone message was from Danielle’s mother, enquiring as to whether she’s coming to the funeral.

Danielle doesn’t make it to the funeral, but does make it to the first day of the seven-day mourning period known as shiva at an auntie’s house, and the house is filled to the brim with people, so this was clearly made a couple of years before the pandemic.

What follows is a constant whirlwind, a perpetual maelstrom of slights, irritations, grumbles, lies, agitation and animus against all and sometimes specific people. Danielle’s parents are incredibly Jewish, at least as these things are familiar onscreen, as played by Polly Draper and Fred Melamed. Fred Melamed has been in a million things, but to me one of the single greatest things he’s ever been involved in is the Coen Brothers movie A Serious Man, where he played the one in a million role of Sy Adelman. It wasn’t so much whether he was great or not, which he was, but it was the way everyone in the flick, when he wasn’t around, kept saying his name “Sy Adelman?!?!”

Here he’s still a welcome presence, but it’s a generic kinda goofy ethnic dad role, who’s mostly only required to forget where he’s left things and embarrass his daughter at a moment’s notice. The mother’s role is a bit more crucial, because while she is as much of an ethnic stereotype, she at least seems to intuit Danielle’s unease, as opposed to the father’s general ignorance.

Most people, at any age, have no idea what they should be doing or aspiring to. Even less know how to pursue those things in a meaningful way. Most of us muddle along and fall into things if we’re lucky. Danielle clearly has no fucking idea what she’s doing. Away from this particular scenario, maybe she’d be more chill and would be able to express it easier, but in this context she knows that she’s all over the place, but that harm minimisation involves lying about how secure her future is and how certain her present is.

All lies. People are constantly asking her questions, constantly, it never fucking ends, and she lies breezily, awkwardly, convincingly, transparently, and that’s even before the sugardaddy she was fucking when the flick started turns up with his wife and baby.

The thing that kills me which isn’t exclusive to Jewish American culture by a long shot, but which gets such a successful airing here is the nasty two-facedness people exhibit a) when they’re talking amongst themselves about a perceived outsider behind their back and b) how they pour it on when the person appears. This is just background noise, but before the baby turns up, it’s described as being dangerously pale and noseless. When the baby and mother are present, it has healthy skin and a cute button nose. Before the sugardaddy’s wife appears, she’s a “shikseh princess”. When she appears in all her blonde glory, she’s an entrepreneur and a titan of industry with three businesses.

And always with the food. We can sense that Danielle is uncomfortable around the food, but people are constantly pressing her to eat more, and she’s constantly promising to be just about to eat, and of course the food available for the people sitting shiv are the most stereotypically Jewish food you could ever imagine: cream cheese and lox as far as the eye could see. But on top of that they’re constantly inquiring about her weight, and why’s she lost so much weight, but also among themselves mocking her for her previous weight when she was a teenager, presumably.

This is all so irritating. The thing about communities and cultures where the stereotypical perception is that they’re so close, and so loving and so utterly supportive is the fact that they’re horrible to the oddballs and the ones that are different, and totally invasive and insensitive and without boundaries. They’re horrible to Danielle! And, you know, to be honest, Danielle’s pretty horrible herself.

Oh boy is she all over the place. Added to the chaos is the presence of her former best friend Maya (Molly Gordon), with whom she clearly at some point had a sexual relationship, but with whom she also has an intense rivalry. Many of the lies she tells various relatives are elements that are facts, except she’s lifted them from Maya’s life.

It’s… a lot, and exhausting, but the flick isn’t massively long. The soundtrack might be from a horror flick, the acting is from a drama, the tone is comedic, the situation is a nightmare, and there’s absolutely no resolution (other than maybe the holding hands bit, which implies maybe a few days of happiness), but it’s over in 80 minutes or so. I hesitate to say I enjoyed it, even though it’s a well crafted, well acted but jagged kind of film, because I found it immensely stressful. But I think it’s a pretty strong flick all the same, and afterwards I had a smile on my face.

Shiva Baby. It feels like maybe it should have had a comma after the Shiva bit, just to make it really swing. The funniest thing for me is that the lead character isn’t even played by a Jewish person, which is hilarious, because her background is Italian, and just to over-generalise, I’m telling you, while there are a lot of differences, certain enclaves of Jewish people, Italian old-school jerks and Greek oldies are almost identical people, with a lot of crap in common.

Including the desire to get as far the fuck away from them when you can.

--
“You look like Gwyneth Paltrow on food stamps, and not in a good way.” - Shiva Baby