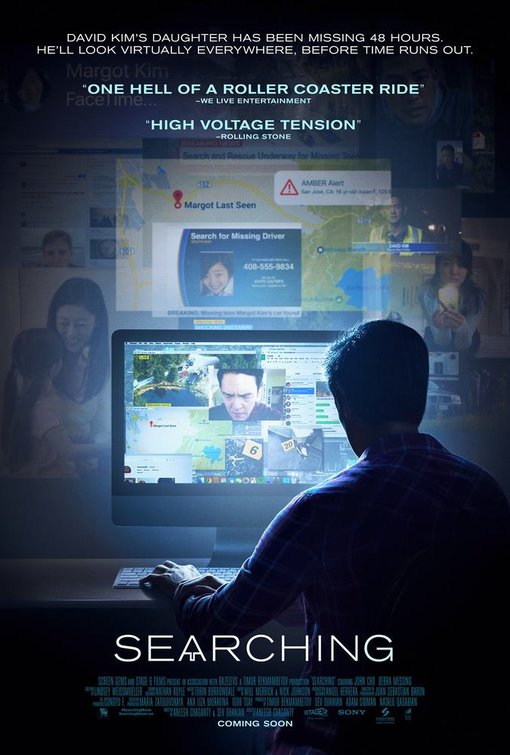 Nothing good comes from sitting in a dark room on the internet...

This is a really keen film that transcends its gimmick (of almost entirely transpiring on the screens of multiple computers, phones, security cam footage and police interviews), to be more a story about the lengths one parent will go to save their child than about the technology it uses.

That sounds like a simple premise, and, in American hands, it seems to, at least recently, involve Liam Neeson killing a bunch of foreigners in order to save his daughter / ex-wife from multiculturalism. Those of us who are parents (and who, on average, like being parents) are compelled by stories like this to wonder about the lengths we would go to in order to protect or save our kids. Rarely do we see it as a negative.

Searching stars the great John Cho, world renowned as the Harold from Harold and Kumar Do Some Dumb Shit while on Drugs trilogy, for taking over the Sulu role in Star Trek from the equally legendary George Takei, and scrambling for decades as a tv guy in a million blink and you'll miss them roles.

He's pretty memorable, though. He's got a certain amount of presence. In this he's not playing an avenging vigilante parent or some kind of action hero. He's mostly just an American guy who works in Northern California and lives with his family, wife and daughter, and would probably prefer not to have to endure such a hideous drama.

The first ten minutes of the film are a study in how you can rip off the accelerated storytelling of a scene like the beginning of Pixar's Up, make it your own, make it work, and not be accused of abject plagiarism. Really, it’s a (banal) master class, it truly is. Even with its montage-like effect, it still gives you enough reasons to care about the family and what happens to them, even if you’ve barely spent any time with them yet.

We meet David (John Cho), Pam (Sara Sohn) and Margot Kim (eventually played by Michelle La) through the various milestones and home video-type stuff that accompanies modern life in the so-called Western world. 1st day's at school, Father's Day, first piano recitals, all that stuff. In between the various elements of a family's lives are the unavoidable hints that something is terribly medically wrong with Pam, and it just keeps getting worse as she battles with, and eventually succumbs to, lymphoma.

Some time passes, and we get to watch the interactions, via phones and chat apps, between a father and daughter that have lost an incredibly important person in their lives, and who are unsure how to carry on. David is, like a typical guy, all "let's just keep moving forward like that person I never mention is just in the other room and never talk about it", and poor Margot, who your heart breaks for, clearly is yearning to talk about the person who’s no longer there, but just doesn’t feel like she can with her dad.

She says she’s going to a study group for a Biology final, and then, though he is constantly keeping tabs on her, she disappears. Her frantic calls in the middle of the night go unanswered because Dad, clearly not dealing with his shit as well as he pretends, needs pills to sleep, pills which make it hard to hear the phone when it’s ringing.

It takes a while for David to catch up with what’s happened, because even with all the technology he has access to, there’s the manner in which we keep expecting everything to keep going along with a plan or a schedule, and everyone else assumes that the schedule is being adhered to as well. Whenever he starts getting too concerned, he can then check something else, call someone else and get a bit closer to where he thinks Margot must be.

Eventually, once he’s realised that she must be at her piano lesson, he calls the teacher in order to ask what the hell is going on, and then finds out his darling daughter stopped going to piano a long time ago.

It’s not only the terror that comes from not knowing where his daughter is that rises up first; it’s the simultaneous terror that everything he thought he knew about his daughter may be either a lie or completely out of date. When he contacts his daughter’s friends and acquaintances, he keeps getting more and more hints that he didn’t really know what her current life was like or what she was up to.

It’s quite telling that the flick, through showing him having to go through his wife’s address books and notes in order to find out details on how to contact Margot’s piano teacher, or who her friends were or what their contact details were, not so subtly takes David to task for the typical dad thing of letting his wife carry all of the so-called ‘emotional load’ because he didn’t have the time or inclination for it. As in, well, maybe it’s a cliché or a stereotype, but it’s often been commented on that there are these roles people self-define themselves in, and quite often you could argue dads just check out on that side of their kid’s lives while they’re growing up.

It’s the classic: A dad leaves a note for the babysitter – it contains three mobile numbers to call in case of emergency.

A mum leaves notes for the babysitter: it’s a fourteen page document, it contains everything to do with the kids’ allergies and food preferences, specific instructions on screen time, bath times and methods, what soaps they have to use because of skin sensitivities, which books they read before lights out, the number of every doctor they’ve ever attended and multiple phone numbers of all the people in the area that could respond first in case of emergency.

Whatever, that’s an extreme example. The truth is, David didn’t know much about what had been going on with Margot, so once the police start getting involved, and questioning whether he really knew her that well, he starts to question too.

Some of the details don’t look good. A detective (Debra Messing) who starts trying to help find her keeps pointing out inconsistencies between what David thinks is true about Margot and what the reality seems to be.

He begins, through resetting all the passwords on her social media accounts, to get a very different picture of what Margot was like up until the disappearance, but he’s still not really getting it. We don’t really know our kids, is what this goddamn scary movie is saying; we can never really completely know what they’re up to.

The saddest for me was when David finds out she was livestreaming in the months and weeks leading up to the disappearance. In watching the streams where, much of the time, she’s just sad, wanting to express something but not really being able to, there’s just her, wanting to say something, but there isn’t really anyone to hear. Except there are some commenters that seem to really care about what she’s saying or not saying.
It’s kind of funny, but really not, that the story keeps throwing up red herrings that implicate some of the people around David, which, so to speak, play a trick on David in order to play a trick on the audience. I’m specifically alluding to something to do with David’s brother Peter (Joseph Lee), which really strongly leans in one godawful direction before veering back to letting us know, hey, something more complex is going on.

There’s also a heap of commentary, not overly underlined, about performative grief, and people who barely knew or who didn’t even like Margot that much portraying themselves as being both incredibly close to her and more devastated than everyone else. The internet truly is the worst.

David gets increasingly more agitated the more he finds out about Margot that can’t be explained, like some fake id she procured and a large sum of money that she withdrew. But increasingly, matching our demented social media age, David seems to be taking more and more of his rage out on arseholes from the internet, some of whom have nothing better to do that be arseholes on the internet, as if that’s what it was invented for.

As things look ever darker for Margot, the important thing from our point of view is that everything in David’s investigation that he does online is stuff that any of us could do. The story is specifically structured such that nothing he does would be outside the ability of anyone who’s reasonably tech savvy. There’s none of this hacker genius hyper nerd stuff, because that would just distance the audience, I reckon, if he was hacking into FBI databases and commandeering drones and doing quasi-mystical stuff. This is meant to be fairly grounded, fairly realistic, which is why almost all the apps he uses are familiar ones. You could argue that it’s product placement or brand management or whatever, but it would have been a bit distracting if he’d always been using Farceberk, Tweeter, Yourtube, Instantgram, Chapsnat or Bing to carry out his searches. Oh, wait, Bing’s real? Hmm.

This might seem to be a standard thriller dolled up with a social media veneer to make it look more relevant to the ‘kids’, almost like a guy in his 40s wearing skate gear walking up to teenagers and saying “How do you do, fellow kids?” It will look incredibly dated in 5 years times when all these apps are replaced with something else even flashier, more privacy invasive and even more prone to abuse, but it does what it does really well. And beyond that, it’s about one parent doing everything he can with the technology we all have access to, in order to find his daughter.

Unfortunately for David and Margot, it’s also the story of another parent who’s just as determined to protect their kid, and they’re willing to go even further than David is to get what they want.

But I don’t want to spoil. This really was an excellent thriller, I guess they call them thrillers, though I wasn’t so much thrilled as I was quietly dreading the worst the whole time. They need a different genre classification for people like me, where it’s not a thriller and it’s not horror, it’s a dreader, where you’re just non-stop dreading the worst case scenario for 90 minutes and if you’re lucky, there’s a brief respite from the dread at the end.

Searching gave me more than a brief respite. It gave me minutes and minutes of curiosity and wonder, and heaps of confusion, and a few moments of “Ah, now I get it”. And beyond the tech / social media nightmare, it’s ultimately saying dads and their daughters should talk more about how they really feel and what’s really going on in their lives.

And what piece of shit could disagree with that?