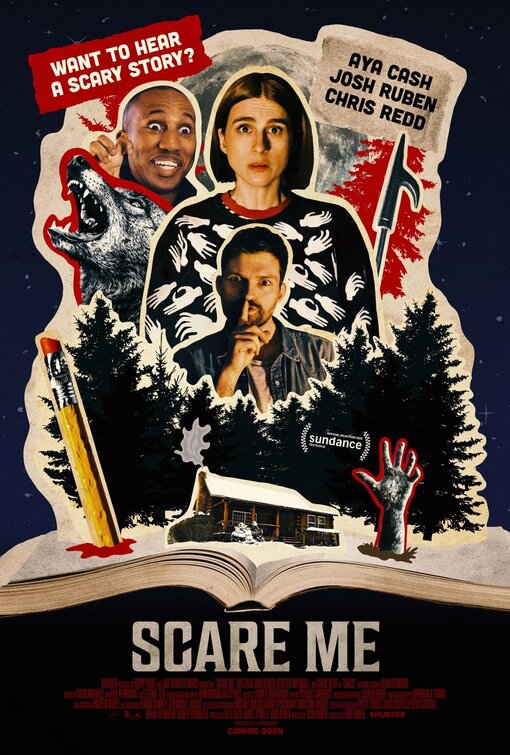 If you want me to scare you, let me remind you that tax
returns for last financial year had to be submitted 3 days ago...

It’s funny. Funny to me at least. The chap that made and starred in this flick, where he plays an insecure writer/director/actor who can’t think of what to make a film about other than something something werewolves, made this flick, and then made Werewolves Within, which I also saw recently.

And though there’s something sour curdling away at the core of this flick, I think I might have been more positively disposed towards that latter flick had I seen this one first.

I can’t always relate to the issues that other characters have, or that actors portray, in movies. My parents weren’t killed by criminals, so that motivation doesn’t move me much for batclad vigilantes fighting villains. Neither my significant other nor my dog were murdered by the Russian mob, so I don’t always feel like I get the motivation of people who kill a million people in revenge.

But a mediocre guy who struggles artistically in vain and sometimes doesn’t accomplish anything worthwhile? I can totally get that.

Fred (Josh Ruben) secludes himself in a cabin in upstate New York in order to work on something. In terms of ideas, all he has thus far is “werewolf have guns – get revenge?” He meets an actual successful writer, immensely popular and well known, and instantly resents her.

That other writer is played by the awesome Aya Cash. Aya Cash may not be a household name, but she should be. She played Gretchen in a tv series called You’re The Worst about a vile group of Friends from a bizarro-universe, and more recently played secret Nazi superhero/villain Stormfront in the second season of The Boys. Everything she plays, she plays with style and élan, and it’s no different here.

As Fanny, without always intending to, she gives Fred a vision of what being an actual creative person could be like, someone willing to work and extend ideas and throw shit around and actually do something, whether it works or not.

At first he’s amazed by her, seeing how her mind goes in directions and places where he never thought to go. Despite their rocky introduction to each other, they end up in his cabin during a power outage, telling each other stories not with the intention of actually scaring each other but in terms of trying to tell scary stories in order to come up with some creative stuff, and one up each other.

It is hard to separate the character Fred is playing from the actor / director himself. Aya Cash I’m pretty sure is not playing a thinly veiled version of herself, though she’s charming in everything she does.

But he has a strange energy to him. There are bits and pieces about his personality, or in terms of stuff he’s done, that implies the roots of his failures as whatever he envisages himself as being also seem to be deeply rooted in his insecurities and anger issues, especially towards women, or at least partners. There is nothing romantic in the flick, so be relieved that that’s not the direction this takes.

There is a disturbing level of resentment that he seems to possess towards women, though, and it makes this flick that looks mostly like a comedy have an uglier edge, especially towards the end, which shouldn’t be a problem for a horror flick (this flick is streaming on Shudder, for all your quality / mediocre horror needs).

A lot of the flick is literally these two crazy cats telling stories they’re coming up with on the spot, acting them out themselves, doing the crazy voices and setting up the scenes, even mentioning what camera techniques and zooms they’d be using right about now “if this was a movie.” Is such a setup too clever by half? Well, absolutely. This flick clearly had barely enough budget to hire an Airbnb, buy a slab of beer and a couple of bottles of wine, and a few grams of coke, and that’s about it. But it uses the deliberate limitations in amusing and entertaining ways.

I was greatly entertained by the early sections, however dumb the stories were. And lest I’ve made it sound ever so pretentious, those early bits are pretty much pantomime. Exaggerated, hammy, overdone, overacted, but all deliberately so and the more enjoyable for it. Fred acts out his story about a werewolf literally tearing a family apart, and the sole survivor’s revenge many years down the track with silver bullets akimbo, and Fanny comes up with a story about a young girl and a scary grandpa.

In Fred’s telling, Fanny makes suggestions pushing the narrative or patching up plotholes that Fred hasn’t considered. In Fanny’s story, Fred throws up useless suggestions she mostly ignores or total roadblocks that help nothing and no-one. Though they both put their backs into it, funny goofy voices and all, what it really illuminates is the difference in their processes, in that Fanny seems to have a creative process, and Fred doesn’t. She can come up with new paths and potential divergences, and he can only stick with was he’s already thought of previously.

Though what he does have is an undercurrent of hostility, especially towards women, that seems to bleed out into his suggestions and prompts. After a break, and some vaped cannabis, which must be what all the cool kids are doing these days, the third story they tell together, both seemingly making it up as they go along, and it is far more collaborative and feels chaotic.

There’s no way any of the stories were improvised on the spot, because, movies and such, but they nail the feel of making it seem spontaneous. The third story especially feels like they’re just moved by inspiration or random thoughts and bouncing off of each other creatively.

Before I go on, I’m not saying any of the stories are that great. There isn’t the implication that any of these stories are brilliant, horrific, disturbing or memorable ones, just that on the path to getting something good, a lot of the time you’ve just got to roll with it. Feeling blocked or not feeling like what you’re coming up with is going to be good enough can just be an excuse not to try, and to permanently be on the cusp of doing something, making something, rather than actually doing it, can become a catch-all excuse for not getting anywhere.

Harsh concepts for creative types. A third person joins the scenario, being a pizza delivery guy called Carlo (Chris Redd, best known for years of being on the sidelines of Saturday Night Live), who’s down for improvising and doing coke and getting into the swing of it, but by this time of the flick, Fred’s transformed from the protagonist to…whatever it is that he morphs into. He resents being sidelined by Carlo, he doesn’t engage with their storytelling, and he’s incapable of being inspired any longer – all he has left is resentment, mostly aimed at Fanny and her success. His lack of success is because, as a white male in his late 30s, the deck is stacked against him, but Fanny’s success is because of luck, because society values her qualities more even if they’re not as great as what he could theoretically write (he still, by this point, has created nothing), and it’s not fair.

And he aims to do something about it.

Honestly, the ending is horrible, but it’s kind of appropriate. Josh Ruben is trying to show what he can do as a director with no budget, and it showed he could do a lot, up to that point. The point of the ending is for the great punchline of who gets to benefit from his creative weekend, and it definitely isn’t him.

In both Scare Me and Werewolves Within he manages to write funnier, and more interesting female main characters, with guy characters that at best seem stilted or constrained and at worst depict all the shittiest aspects of male toxicity expressed through the construct of the horror genre. There’s also the undercurrent of potentially working out what the best way is these days to depict male characters, considering for nearly a century of cinema white male American characters were considered the default character template in almost every American film. Maybe there’s an element of overcompensation in both of these films, but I applaud Josh Ruben for at least thinking about what it means.

From this shitty guy Fred he went to having a main character in Werewolves Within who, while African-American, tried to embody all the best qualities of a saint like Mr Rogers from his famous Neighbourhood, as opposed to succumbing to all the worst masculinist clichés (embodied by most of the other male characters). I feel like the elements didn’t really cohere that well in his most recent film, and it also feels like, after debuting with a small scale two hander, he bit off more than he could chew with something with so many characters to balance.

But. At Least. He Tried?

I enjoyed this. It didn’t scare me, but it didn’t need to. Aya Cash should be in all the movies, and they both entertained me, for 80 per cent of the movie, so I tip my hat to both of them.