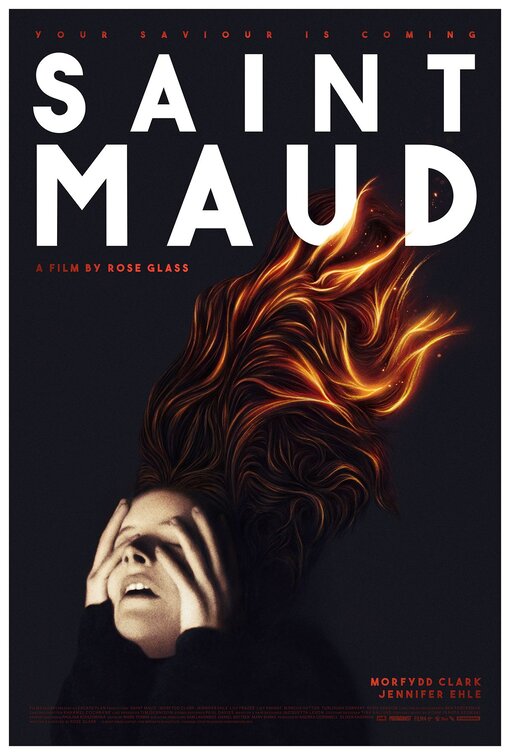 She's not even a redhead in the film. That's it, I'm going
to complain to Maud's manager

Saint Maud is called, being reviewed as, categorised as, a horror film.

I’m not 100 per cent sure it is a horror film. It could be because I’m fairly jaded, or it could be because as a character study, it’s more depressing than shocking. The flick also isn’t scary in any sense, other than in the sense that it can be scary to watch someone harm others, harm themselves.

For me, in this instance, it was more unpleasant to watch, rather than scary. There are definitely horrible things that happen in the flick, all done by Maud (Morfydd Clark), and mostly to herself.

So for me it’s not horror. It’s disturbing, but most of all it made me feel tremendous sadness for the main character.

And by sadness I don’t mean my usual default setting of bursting into tears every time someone says something supportive towards someone, or the string section swells, or a puppy is saved, or any number of tear-jerking moments. I just feel really sad for her, is all.

If she’s not profoundly mentally ill, then what she’s experiencing is something supernatural. Any time someone starts looking at the drawings of William Blake, either someone turns into a serial killer or they’re going to set fire to something big.

God, or Jesus or someone talks to her, occasionally. She feels the presence of the Lord, inside of her, sometimes. She sometimes feels moved to an almost religious level of ecstasy.

But it doesn’t last.

We are given some hints that something bad happened when she was working as a nurse in a hospital, perhaps bloody and fatal. So we see her leaving her awful bedsit, which is possibly the smallest and saddest bedsit I’ve ever seen (and I’ve seen some truly fucking dismal bedsits, especially the one I lived in for three years), and she moves along to what we hope is a new job, as a live-in carer to a dying woman (the always great Jennifer Ehle, most famous for playing Lizzie Bennett in the classic Pride and Prejudice series with Colin Firth as Darcy, but great in everything else she’s ever done too).

Her patient is a former legendary dancer who lives in a truly grand old house in Scarborough, which is by the sea. Dying from cancer has left the woman with zero fucks to give about anything, other than reminiscing about how great it was to dance as she did, and to have some final laughs and fun before she pops her clogs.

This is not enough, as far as Maud is concerned. God must have a plan for these last days of Amanda’s life, and it can’t be just enjoying the morphine, smoking a bunch of smokes and shagging, can it?

Well, I mean it sounds like the greatest way to go out on your own terms, to me, but Maud is wired very differently.

She is convinced that this is the moment for her religious fervor to come to the fore. She needs to get Amanda on the same page, with these vaguely understood and profoundly disturbed manipulations of Catholicism, to ignore a lot of the more recent Jesus is about love etc stuff, and to be more about “pain is good, pain is great, we surrender our will to Jesus as of this date.”

Don’t waste your pain, is a phrase she repeats several times. Maud has decided suffering, whether hers or Amanda’s, brings them both closer to God, and the ecstasy, the rapture that she craves.

It’s staggering to me that the film puts me in the position of almost defending the Catholic faith, when I loathe the Catholic Church with every fibre of my heathenous being, but here goes anyway: I am pretty sure the director Rose Glass isn’t saying Catholicism brings out the sadomasochism in its devotees, or that the Catholic faith wants people to suffer in order to get closer to God. I feel pretty confident in saying that the central, terrifying problem is that Maud is deeply unwell, and her strange mind is latching onto the worst superficial aspects of a faith she’s recently adopted and doesn’t know much about.

I mean, honestly – contemporary Catholicism may be a strange place where the more conservative elements wish the Mass was still in Latin, and that they could somehow take away autonomy from women and children, and mostly away from people who aren’t Catholic, but they’re not really into the whole “mortification of the flesh” as the pathway to salvation any more. Giving lots of money in the collection plate and turning a blind eye to the predatory pedophile priests, bishops and cardinals is definitely great: harming yourself for the fuck of it or committing murders of unbelievers? Not so much.

Maud seems like she’s learned about the Catholic Christ through watching Spanish horror flicks from the 70s about the Inquisition, or that she’s imagined a lot of it. It’s pretty clear that she isn’t having visions. Like most religious people who’ve claimed visitations and such, it’s pretty clear that she’s hallucinating. She doesn’t even have the excuse of taking drugs in order to get closer to the godly spheres, again unlike the mystics of the past.

During the brief time where Amanda, her patient, likes her and is drugged up enough to listen to her, but not so far gone that she’s unconscious, she gives a gift of a very expensive looking book of William Blake paintings / drawings, and this has the added effect of enhancing Maud’s delusions about what stuff she should be seeing if God / Jesus / Flying Spaghetti Monster really is talking to her.

That’s…not a good thing. The last thing she needs is encouragement. Maud does have a strong idea as to what Amanda should be doing with her last days, but Amanda profoundly disagrees, and therein lies the rub.

At Amanda’s birthday celebration, which is kinda ironic if you think about it too long, Amanda mocks her little nurse, for her potential racism or her potential homophobia, and Maud, like any loyal member of the Catholic Church, cannot take any criticism for her appalling beliefs or actions at all, and lashes out…

Back to the squalid bedsit. Back to not knowing what her purpose is, or how to feel the Lord’s presence inside of her again, on the regular.

And things, like they inevitably do, get far, far worse for her and everyone around her.

Again, for me, watching what happens here, the escalation of her delusions, the upping of the self-infliction of torments, is ugly and painful to watch, but what’s worse (just for me, because I’m pretty sure this is exactly what the director and actor wanted) is the feeling that Maud is so lost that even with help, even with support, nothing would change.

She bumps into a former work colleague who’s worried about her, who even braves coming into her dismal bedsit, but Maud can’t even hear what she’s saying. The words she speaks get muffled so we can barely hear them either, showing how little chance there is that anyone can get through to her.

And she is so alone, ever so alone, unable to connect with any humans at all. She tries everything, even having awkward sex with complete losers, but none of it brings the feeling that her religious ecstasy does, and none of it brings her any closer to being able to make a meaningful connection with anyone.

It feels fruitless to even mention whether she might be on the spectrum as well, coupled with disassociation or any other number of illnesses that could be present, because I don’t think the flick is trying to make the point that she’s unwell and the support systems that should have been in place to help her aren’t there because of, I dunno, Margaret Thatcher or something. It’s saying that, well, I’m not sure what it’s saying, other than that there’s a fine line between religious experience and psychotic episode, and that something horrible happening is inevitable if you’re as unwell as Maud.

And beyond that? Who knows? I actually actively dislike that they play coy about whether it’s “really” happening to Maud for reals at first before they make her seem completely insane BEFORE she does more horrible things, such that there really isn’t any doubt that she’s a sad, desperately ill person. And even though we hear her thoughts, and even the word of God, which happens to be in Welsh, don’t you know, there’s no indication why she does what she does in the end, or what she thought it would bring, either to her or to the world.

As to what happens between Maud and Amanda in the end – I think it started off okay, but degenerates into the purest of nonsense, distortions with CGI, implying that something like out of a “genuine” horror flick like The Exorcist is “really” happening, when we know full well it’s not. It cheapened it, I’m sorry to say.

It’s keenly directed, I mean, none of the criticisms I’ve made can be aimed at the way the film is realised or the incredible and incredibly off-putting central performance. The creepy, discordant score, often consisting only of a jagged cello string sounding pained and bloated, keeps things nice and doomy. Morfydd Clark is phenomenal, unbelievably great in this harrowing character study. I just don’t think the story has the complexity it would need to justify the trouble everyone went to. I feel like it misses something key about both religion and about mental illness, and I don’t think the story ultimately means that much other than the sad life and times of a poor lost girl who chooses to call herself Maud.

--
“Forgive my impatience, but I hope you will reveal your plan for me soon. I can't shake the feeling that you must have saved me for something greater than this.” – so say we all, it’s just that the rest of us never get a response back - Saint Maud