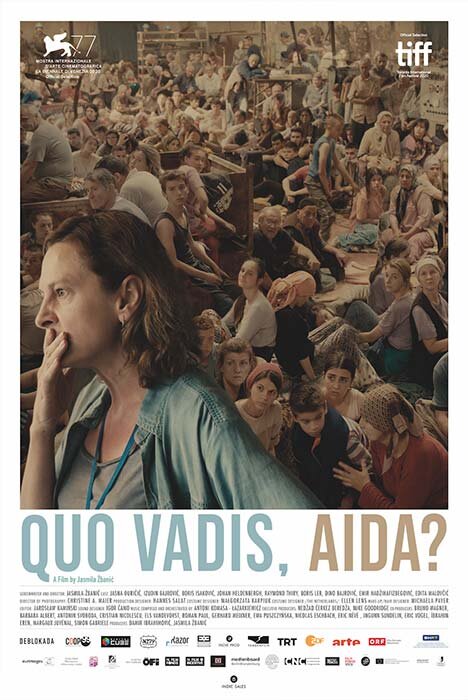 And no it's not Elizabeth Moss, just FYI

This is some pretty heavy stuff to deal with. This happened in the mid-90s, which isn’t that long ago. For some reason, at least for me, it’s easy to forget that at a time when I was going to gigs and staying up all night arguing about pop culture bullshit with friends drunk out of our minds, there was a war in Europe, and people were being slaughtered just for being who they were.

This is a true story in the sense that there is a town called Srebrenica in Bosnia / Herzegovina, formerly Yugoslavia. And the Serbian army slaughtered a whole bunch of Bosnian Muslims there, for no other reason than that they were Bosnian Muslims.

And there are two armies depicted in this, but only one of them is killing people, and it’s the Serbian one. The other army is made up of Dutch soldiers, some of whom are wearing shorts. Some of them have big moustaches, but mostly they’re not very intimidating. They are there as United Nations peacekeepers. They are running a refugee camp, because the Serbian army has been terrorising all the villages and towns around Srebrenica, and many of those who weren’t killed fled hoping the UN would look after them.

It remains one of the great tragedies of the last half of last century, up there with Rwanda as well I guess.

This flick is so matter-of-fact about what happened, about how desperate these people were to survive, how there was no magical solution, and how the vast majority of them didn’t have a chance.

The main character, as one could guess from the title, which is Latin for “Where are you going, Aida?” is Aida (Jasna Đuričić), who speaks English and Serbian, I guess. She is a Bosnian Muslim, and she has a husband and two grown up boys. She helps as a translator with the peacekeepers, even though she doesn’t speak Dutch, but they do speak English.

When the film starts, after a long pan from right to left of Aida and her family, Aida is translating to the Dutch the concerns of the mayor of Srebrenica, who is worried that the Serbian army is getting ever closer. The Dutch commander assures him that the army won’t enter the town, because they have said to them that if they enter the town, NATO will bomb them. There keep being variations on phrases like “in no uncertain terms” and “this is a UN resolution”, but it ultimately means nothing, and the terrified and angry mayor knows it.

Aida is not a person with power in this situation. The most she is able to do is chat to people in different languages, and try to save her three men.

The Dutch aren’t interested, really, in saving anyone. The Serbian army no longer cares about appearances, as it is determined to get what they think of as revenge. So it’s down to Aida to desperately scramble about to find a way to avoid the inevitable.

It’s kinda terrifying to watch. There’s a lot of people falling back on bureaucratic phrases and “it’s beyond my control” statements, and it amounts to a lot of people knowing what’s coming, but there not really being a way to avoid it.

So, Aida, as a character, seems like she has agency, like she could almost trick or coerce or beg the right person. She seemingly has more agency that the other Bosnian Muslims, and even more so than her husband and sons. It’s almost remarkable seeing a character who’s so well respected and liked, at least by the people who don’t want to kill her for being Muslim, because she’s a school teacher. Remember a time when school teachers were universally respected and admired? No, I can’t remember either.

When the big boys of the Serbian army, itching to start exterminating Bosnian Muslims, see Aida, they recognise her, and she recognises them, having taught some of the fuckers in year’s past. Not only do they recognise her, but they ask after her sons, who they went to school with too.

I honestly don’t fucking get it. I don’t understand how people who were living next to each other in towns and villages across Yugoslavia for decades and decades decided one day “I hate you and everyone like you, and I will do everything I can to kill all of you.”

I can understand hating a person, maybe even a group of people who’ve wronged you or someone you love. I can’t understand people who decide the people next door, who look exactly the same as you, but have a slightly different surname and worship at a different type of holy place, are scum and have to die. Men, women, children…

As much as I don’t understand it, I’m not blind to the fact that it’s happened so many times, and that many will try again to make genocide great again. This isn’t a flick where people make impassioned speeches and change people’s minds. This is a flick where the oppressors get to oppress a bunch of people, treat them horribly, and nothing stops them and no-one changes their minds.

We may feel for Aida, but what are we to feel at the prospect of only her and her husband and kids maybe surviving, when no-one, including Aida, is going to save thousands of other people? Do we take it as perhaps the prospect of relief, that, even if the rest died or were horribly treated, at least a few people got away?

It may sounds simplistic to point out, but I don’t think the flick goes out of its way to demonise the Serbian army. I’m sure people who support the Serbian army, were in the Serbian army or agree with what the Serbian army did probably would disagree, because to them these chaps were Christian Patriots who were getting righteous revenge upon chaps who slaughtered their comrades in years past. There are always people who can justify anything, and there are those who justify what is commonly referred to as the Srebrenica massacre by saying a) it wasn’t that bad and b) if it was bad, they had it coming to them, because they deserved it.

It’s the mantra of fascists since time immemorial, and will be the same argument being made centuries hence. If anyone comes out of this badly, it’s probably the Dutch, led by Colonel Thom Karremans (Johan Heldenbergh). He has a mighty moustache, but nothing behind it, and he essentially hands over the Bosnian Muslims for slaughter, with nothing, not even the thin veil of a fiction that they’re not going to be slaughtered. And, of course, it’s funny to see how angry he gets with the people being marched to their deaths, versus the fuckers doing the killing.

It’s infuriating. It’s heartbreaking. I’m not going to spoil the fate of the family, but will mention that it has a coda, of someone visiting the place where they used to live, only to find that the home they were forced to flee from is occupied by one of the jerks who forced them to flee. That sometimes what seems like genocide and complex geo-political bullshit is sometimes just jerks being selfish jerks. But at least they had the decency to hold onto the family’s photographs, which provides a tiny bit of comfort.

That part of the world is still coming to terms with what happened. The tensions and recriminations and sorrow will be there forever. I don’t know what films like Quo Vadis, Aida? really achieve, in the long run, but they do remind us of the horrors of history, and how easily, how depressingly easy it is for awfulness like this to still occur.

And that it occurred within my living memory. Not World War II, not centuries ago, but during my lifetime.

And I did nothing to stop it.