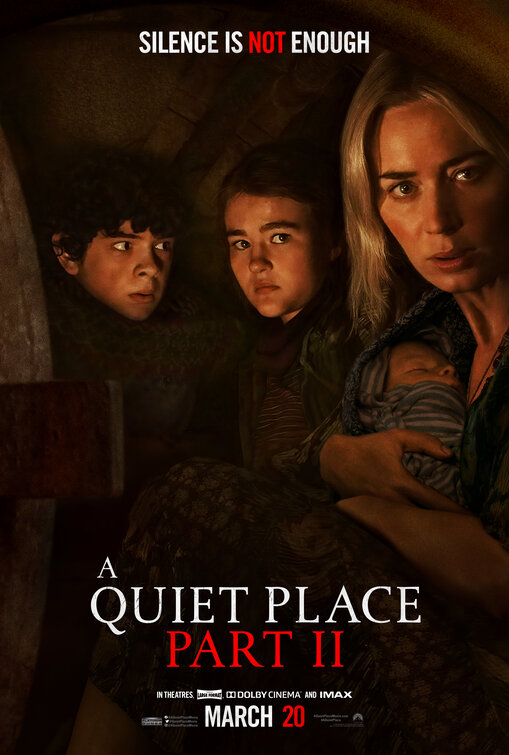 They really dropped the ball with that title. C'mon, surely
someone should have pitched "A Quieter Place" as a possibility. Third
will be The Quietest Place of All. Maybe I should suggest it

The real victims of the pandemic: the people who made this film.

Not the 4 million or so who died, or those who lost people: those who were adamant that this film was going to come out in cinemas in March of 2020.

There were even posters up in bus stop shelters and on public transport in this fair city of Melbourne, because they were absolutely sure what we needed to see was a story where people are terrified to leave their houses because of an implacable enemy.

Well, they waited a year, and they got their wish. Some cinemas re-opened, and enough people went to see this to justify their strategy, their patience, the champs.

Their sacrifice = our gain. Lucky us.

Anyone who watched the first one and liked it should probably be grateful that they made another one. Anyone watching this one without watching the first one probably won’t be too baffled, since the premise is dirt simple – alien creatures that hear really well but can’t see shit arrive on Earth and kill almost everyone. A family, the only people we know are alive, tip-toed around and whispered or did hand signals to each other for the film’s entire length. Not everyone survives.

A Quiet Place: Part 2 – Electric Boogaloo starts with a scene before disaster befell America, showing us that the family we followed in the first movie lived in Smalltown USA upstate New York, where people went to their kid’s baseball games and apple pies quietly cooled on window sills before it all went to shit. Then it picks up directly after where the first movie ended.

A woman (Emily Blunt), and her two teenage kids, and a baby, somehow pick their way out of the remnants of the enclave they had built for themselves, where they were somehow safe against the monstrous onslaught. The birth of a baby can be traumatic for any number of reasons, but when it happens during a sound-hating alien apocalypse, it’s somehow even worse. They have to leave the place they were, walking to the end of the sand-laden path, beyond their safe space, into the unknown.

The one difference is that thanks to the efforts of their all-American super dad, they now have a weapon they can use against the sound-hating aliens. I mean, they used it at the end of the first flick, but now the plan is to kill even more of the nasties if they have to.

With more freedom comes more danger, because there’s really no shortage of new aliens. They previously thought there were only a few around, but it turns out that every time you kill one, another one comes to take its place. Or at least that’s how it seems.

They eventually bump into another chap with haunted eyes, someone they used to know from their previous life, and if you ever want to cast an actor to give the “haunted eyes” look, Cillian Murphy is the guy you go for, because his eyes are pre-haunted. They look like he’s seen the deaths of countless people he loved before any film even starts. And if you’ve seen him on Peaky Blinders, you also know those eyes are cold, pitiless and cruel.

When you cast him in something like this, the question you ask yourself is not “when is he going to step up and save everyone?”, it more transpires like “who is he going to let die first and what order is he going to eat people in?” He’s meant to be a counterweight to the noble, tall, impervious super-dad Krasinski cast himself as in the first flick, because once you open up the world in a story like this about how people survive in an apocalypse, you immediately are confronted with the premise that “other people suck.”

You can’t really blame this Emmett chap who Murphy plays. Unlike the other perfect dad, he wasn’t able to save his kids and wife, so he’s sitting around in this perfect place almost purpose built to defend oneself, but he seems like he’s only sticking around to let people know how sad he is. When he kinda saves the family but also accidentally harms one of them with a trap, his first statement is something like “you gotta get out of here at first light” or some such.

So you think, on some level, yeah, I guess that makes sense, but don’t you want to die anyway, you bearded weirdo? And plus what makes you so special to kick them out: they got guns too, ya jerk.

No, his purpose is to be reminded of his purpose: protect and help people when you can, which is a noble sentiment, in or out of an apocalypse.

The real path of the flick, other than to show how shitty some people are, is to get the kids to step up, so that it’s not just about them cowering in terror in the face of certain doom, but of being brave enough to step up and protect themselves and the people they care about.

Krasinski, as director, is so focused on this objective that he makes their parallel struggles to survive and rise happen literally at the same time, in cross-cut scenes. I guess it’s a good idea? The tough kids will inherit this doomed earth, and perhaps make it a little less doomed, with their pluck, grit and fearlessness?

Those aren’t bad messages. I mean, not that you’d qualify this film as a message film – it’s just a thriller where people are terrified of being eaten by monsters, but the idea that the young aren’t there solely for us to fuss over (except the baby, who contributes NOTHING to the mix, NOTHING!). If there is to be some kind of future, the old tried and true method of only looking after you nearest and dearest, worrying about your own backyard alone, isn’t going to cut it.

With the expanded world, there are more threats, beyond that presented by more aliens everywhere all of the time, but there’s also the opportunity to see how people who found themselves in a place of relative safety live. Regan and Emmett find such a community, where people have been living in safety and joyous comfort for a while. So long in fact that when one of the sound hating fuckers turns up, you know they’re all doomed.

Sequels are not bad in and of themselves. This flick exists as a perfect continuation of a decent enough story. The kids are wonderful, especially Millicent Simmonds, who’s given a great performance in both films, and whom the story serves well, in terms of finding potent and gentle ways to integrate her deafness into the story, and makes sign language crucial to the dynamics in a number of ways.

This unique family had an advantage they didn’t even know about before the world ended, and when they struggled to survive, it somehow left them better placed to be able to get through. That’s not a message you generally get from movies, which often tokenise character’s disabilities or make it an obstacle that someone else has to cater to or surmount.

I really liked the first flick, like, a lot, and while I don’t love jump scares, and nor do I think everything needs to be extended in endless sequels endlessly, I’m happy enough that another solid entry came out reminding me how scary this world can be, even without alien monsters being in it.

8 times all we can do is our best in the face of oblivion, and, if not, then get out of the way of those who can do better out of 10

--
“There are people out there, people worth saving.” – you say that, ma’am, but I often see too much evidence of the contrary - A Quiet Place: Part 2