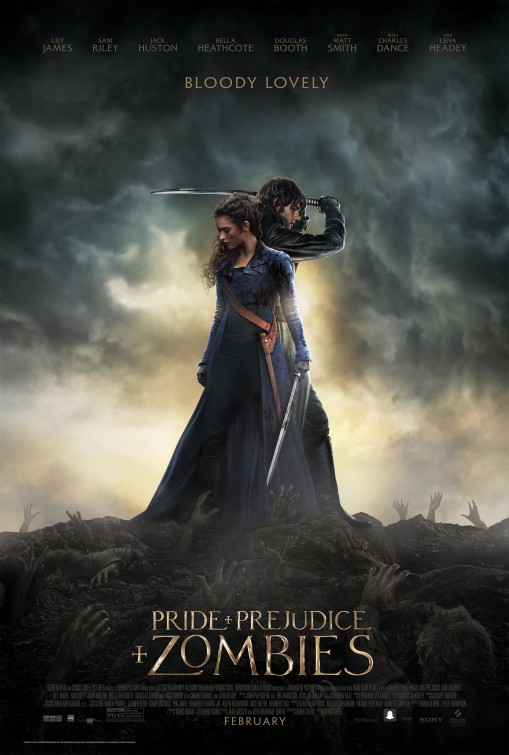 It should have been more fun than this.

It should have been more… something, anything than this.

There’s no argument that the world needs more versions of Pride and Prejudice. We don’t. Thanks, we’ve had plenty, there’s no more room at the inn.

I say that yet I happily watch any of them whenever they appear on cable. Especially that one, you know the one, the one that’s sex on a stick, with Colin Firth as Darcy and Jennifer Ehle as Lizzy Bennett. Even the ones I don’t like I still watch, like that one with the stick insect and the other guy, or that Bollywood ‘inspired’ one, or any of the literally one million other versions.

Well, as far as I can tell, virtually all romantic ‘literature’ is based on a woman meeting a gorgeous guy who at first acts like a complete piece of shit, who over time is revealed to be incredibly wealthy, immensely thoughtful and caring and probably has a ten-inch-dick to boot. And that initial impression, which has to do with difficult childhoods and previous awful girlfriends, gives way to perfect understanding and eternal devotion and everything her heart and vagina could ever possibly desire.

The single most important thing, after all, is that a female character should never, ever have to admit that her first impressions about a guy were wrong. Entire plots should be devoted to proving her right, but right from the start, such that she was never wrong, and all of her protestations to the contrary should be manipulated around until the world itself supports their being together for no good or healthy reason other than that People Must Be in Couples or They Should Just Die Already.

Pointlessly combative, that’s what I’m being. I do, even after all that, even after all the iterations and versions, even after watching this shemozzle, I do still love the character of Lizzy Bennett and romance in general. I can’t help it, I’m a deranged romantic myself who believes, despite the bewildering array of evidence to the contrary, in the transformative power of love. I also love female characters who fight against social strictures and oppressive cultural conformities in their pursuit of a Room of their Own – before they get married and have kids and stuff.

Sometimes all you can do is fight the patriarchy for as long as you can before giving in, in sweet and optimistic ways. What’s all this got to do with the film being reviewed?

Not much, to be honest. Had this exact same inept movie come out eight years ago, at the height of the literary mash-up era (the book this is based on was the ‘first’ of that bunch of Quirk Books, so had this come along back then maybe someone might have given a damn), but now it has the perverse distinction of looking like it’s trying to ride the coattails of Abraham Lincoln: Vampire Hunter, what, with the tremendous success that dumb flick had.

Huh? What tremendous success? Sarcasm. There should be a font for it.

So now that we’ve established that no-one cares, and that this seems to have been made more out of a feeling of obligation rather than any great opportunity or groundswell of public fandom, what we’re left with is a flick that fails at both of the low concept ideas it tries to juggle, though it isn’t a complete failure.

I mean, it’s a failure by any actual metric you care to mention or think of, in terms of whether audiences cared or whether it made any money, but it did garner at least three good actors for lead roles, and that has to count for something?

Lily James has probably been good in stuff, Sam Riley has definitely been good in (underappreciated) stuff, especially On the Road, which virtually no-one saw or liked, but Charles Dance and Lena Heady? Even if you exclude the sheer magnitude of the awesomeness they’ve brought to the table as father and daughter Lannister in Game of Thrones, they’ve done oh so many other most excellent things as well.

Still, as okay as most of these actors are, even they cannot save, survive or transcend something so completely empty and misguided. Maybe, I’ll grant, just maybe in book form this had some kind of jokey appeal. But getting to the screen in this tardy and half-arsed, maybe not even quarter-arsed fashion is just the height of naffness.

It’s ever so naff. Maybe, just maybe, you can thrill to the notion that much of it might be just like in the book, with the simmering tension, sexual or otherwise, between Lizzy and Darcy, punctuated with sword fights and zombie attacks and such, but still telling ultimately the same story. But this is such a cheap and nasty version of something that was a cheap and nasty mashup in the first place. I don’t know how much they squandered on this, but whatever it was, it looks like crap. The CGI is not even at a Sharknado level of quality, even though, really, I wouldn’t have thought this would have needed that much CGI at all.

If there was meant to be something of a thrill in watching the Bennett sisters not be helpless ditzes, well, it retains some of that. I mean, the younger Bennet girls are still annoying, but there are a fair few comical scenes where they reveal just how not in distress these damsels might be, what with their hidden weaponry and such in every nook and cranny.

But the fight choreography is subpar. I would have cut the flick a great deal of slack had they gotten any of the fighting done well, even adequately. The simple fact is that in the book the incongruity of having these gentle lords and ladies of the Regency era also fighting with swords like Shaolin and ninja masters is funny, but getting it to look believable enough on the screen would have taken a lot of money and talent that these makers clearly were never going to get.

And boy does it look shoddy. The script, which leaves out most of the book anyway, makes inexplicable changes to the story which don’t make a lot of sense even as you consider that they were perpetually scaling back on their ambitions the further this cursed production stumbled along.

Wait, maybe I’m judging it on criteria that it doesn’t even deserve. Maybe all I should bother with is whether we buy the central relationship between this bizarro-world Darcy and this pretty much exactly the same Lizzy Bennett. Well, yes, it’s buyable, I mean, they’re competent actors, and they’ve done probably oodles of period piece stuff. Lily James was fine in that recent War and Peace adaptation mini-series that I enjoyed watching, and Sam Riley is Sam Riley, and should be the next Orson Welles or Shia Labouef or something. They kinda sorta sell this hate that becomes love because, hell, we’ve bought it so many times before, why not buy it all over again?

It’s a fucking idiotic idea, and it should never have been made.