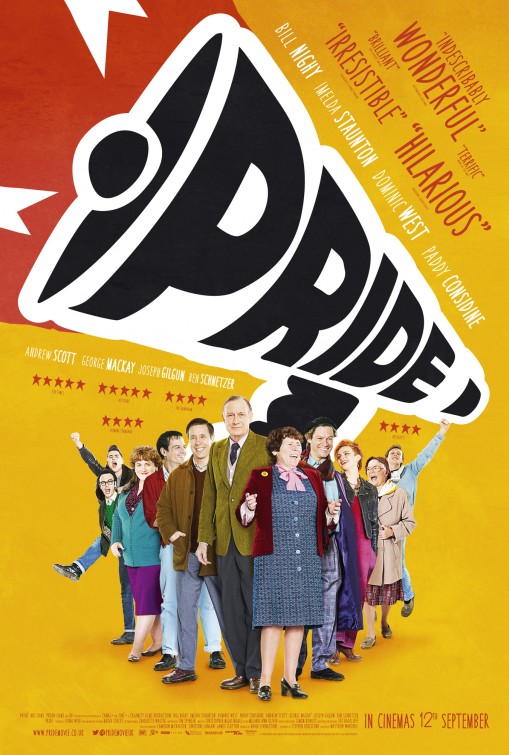 The union forever defending our rights!
Down with the blackleg, all workers unite!
With our brothers and out sisters from many far off lands!
There is power in a union!

A few of the reviews I’ve read about this film, or at least ones I read before watching the flick myself contain the stock standard sorry phrase “you wouldn’t think there’d be much crossover between the 1980s British Gay Rights movement and the coal miners who went on strike, but Pride’s here to tell you, there was!”

Maybe that’s not entirely accurate; maybe I just imagined it. It’s just that the film itself plays off on the alleged jarring juxtaposition, and so the reviews mention the self-same seeming ‘paradox’: that the people you would imagine would least like ‘the gays’ end up accepting their existence.

Pride is no doubt heavily fictioned up, but is nonetheless based on the true story of what happened in the 1980s in Britain, in Maggie Thatcher’s Britain, more importantly. As the film tells us, activists for gay rights / equality under the law woke up one morning and found they weren’t being harassed by the cops anymore. Or at least, not as frequently. This didn’t come about because anything changed legally in the country: it came about because the cops were now too busy harassing and beating the crap out of the striking coal miners.

Maybe activists like Mike (Ben Schnetzer) truly did feel the camaraderie of the oppressed, and his heart went out to the miners and their families: maybe he just missed the cop harassment in a Stockholm syndrome kind of way. Whichever the reason, he and his fellow activists perhaps just want to do good out of the goodness of their hearts. On the other hand, perhaps they saw an opportunity for what these days would be called ‘community outreach’, which is another word for marketing.

With so many rightwing nutjob columnists, and a fair few politicians, in papers and on the telly complaining about the pink mafia or the ‘homosexual agenda’ as they drolly put it (it’s pretty much a given than whenever an older politician or commentator laments the influence of ‘homosexuals’, with the loving / acidic way in which they intone the word, there really isn’t a closet big enough to hold them anymore), you may be forgiven for thinking that the 1980s was surely a paradise for women, ethnic minorities and poor people, unlike now. But we forget just how hated gays, lesbians and trans people were even in supposedly enlightened western first world countries.

I mean, in a lot of ways there’s still a lot of resentment towards them, fear masking hatred, ‘concern’ masking fear. Just because there are a ton of shows on the telly featuring chaste gay characters doesn’t mean the battle for equality under the law is won. Since marriage equality is still being fought for, and we still get new conservative governments, whether at the state or federal levels, looking to rollback protections against discrimination, there is a false sense that battles won = everything’s awesome forever.

Pride reminds us that the battle was hard, and it was worth it, and that it made for strange bedfellows. It also contrasts the two ‘worlds’ the two groups of people come from as being incredibly different. Yet they find some commonality in the middle through one element: money.

When the quite beautiful Mike, looking like he should be the lead singer of Human League or some similar band of the era, and his friends start raising money using the repeated call “Lesbians and Gays Support the Miners”, you could be forgiven for asking, like my partner did as we were watching this, “Why?”

Let’s just take it at face value, and assume that it was simply because he cared. He felt compassion for what the miners and their families were going through, with no income, and with the media and government maligning them for taking a stand. So they’re raising money and intending to hand it over to the coalminer’s union, in order to get it to the people who need it most.

Of course the union wants nothing to do with them. Sure, they’re all for solidarity and wearing dull coloured overalls and clothes that look like they’re from the Salvos circa just after the war, but they can’t take gay money. No no, that money’s tainted. It will… something something their reputation or make them more hated in the media, is the excuse they give when they turn down their charity.

What do you do then? You go directly to the most needy.

And who needs help more than the Welsh, eh?

One of their number, Gethin (Andrew Roberts), suggests, being from Wales, a good, honest, brutally ugly town called Onllwyn, filled to the brim with good, hearty, honest homophobic folk. If the whole town is reliant on the mines, and all of the miners are nervously on strike, that means there’s no money, meaning no food either. When LGSM come all the way down from London to this one-horse, one-mine town, of course all these people are going to be sort of horrified. Their union spokesman Dai Donovan (Paddy Considine) admits that he didn’t even realise, when they left an answering machine message pledging their support, that they were Lesbians and Gays etc etc.

It helps if your village elders are played by veteran Brit actors like Bill Nighy and Imelda Staunton. Sure, they could have ended up being bigoted monsters (Staunton did, after all, played one of the most pernicious and bureaucratic monsters ever as Dolores Umbridge in the Harry Potter flicks), but more than likely they’ll be the ‘slow to come around, but eventual powerful supporters’ of the various fags and dykes that overrun their town.

Curiously, despite there being an abundance of interesting characters already in the story, characters mostly based on actual people, the screenplay feels the need for a ‘better’ audience surrogate than Mike (who I would have thought warranted being the main character, or at least the character interesting enough to justify the story being told from his perspective), so they create an audience surrogate in the shape of Joe (George MacKay) whom everyone calls Bromley anyway. He sort of stumbles into a Gay Pride march at film’s beginning, and then just hangs around, fascinated by these rare birds he’s never imagined before. He’s on the cusp of adulthood, and the law across Britain still renders what most of his newfound friends do in the privacy of their bedsits, alleyways and toilets illegal. He is meant to be a fresh pair of eyes seeing the sights in both worlds, without really being a part of either.

Once the story’s emphasis shifts from the LGSM crew being hated in London to being fish out of water in south Wales, the real point here becomes watching the gradual, grudging acceptance of the townsfolk of a bunch of money. They need the money, but they’re homophobes, so most of them have to come around before they can accept the money. The ones who accept them (and their money) straight away are obviously the nicest people (old people being fascinated by ‘the gays’ and asking them inappropriate questions is practically a cinematic cliché in itself), but there are people in the town that need coaxing to get over the line.

Some of them, like one of the miners called Martin (Rhodri Meilir) regard them with undisguised horror. As is traditional in these narratives, which was satirised in The Simpsons episode where John Waters saves a homophobic Homer from angry reindeers and says “Well, Homer, I won your respect, and all I had to do is save your life. Now if every gay man could do the same, you’d be set”, the “gays” have to actually do something that positively impacts on the miners’ lives before they grudgingly accept them. The money’s just not enough.

Really, what actually happens is that Martin’s wife yells at him a while, and then he changes his mind. More so than the fact that it’s “the gays” that convince Martin’s wife of how to coerce the police into releasing some arbitrarily arrested miners, freeing Martin and a bunch of others because they don’t have a legal leg to stand on, and the townsfolk now know it.

I keep referring to the character played by Jessica Gunning as ‘Martin’s wife’, but she’s probably the character in the movie, other than, I dunno, footage of Margaret Thatcher’s bizarrely coiffured head, of most interest and achievement. After a pep talk given by one of LGSM, and after she’s shown herself to be a bit of a firebrand, a caption at the end informs us of what she goes on to achieve after the events of this film effectively end. She’s an amazing woman.

And it’s pretty impressive, in fact, what this coalition between different groups achieved far beyond raising money is profoundly moving, but occurs after the film has practically ended, really. It’s funny that the film’s most poignant moments occur at that point, and not earlier on. There’s this inexplicable moment when Mike (maybe it’s not that inexplicable) gets angry with the rest of LGSM and just disappears from the film, but it’s strongly implied that his absence is health related.

The culmination of the narrative seems to be some legendary fundraising gig where the group re-appropriate the slurs against them in the Murdoch papers, and host a Pits and Perverts concert headed by Bronski Beat and a bunch of other bands (also the actual ‘coming out’ of Bromley as he finally hooks up with some random cute boy). The real culmination is what changes were wrought upon Britain itself by the coming together of different groups of British society in common cause against a vile Tory government.

I’m not ashamed to say I had tears in my eyes as Billy Bragg sang that there “is power in the union” at film’s end, more so because we get to see a real expression of solidarity, rather than meaningless talk and empty gesture. To me it ends up being a stirring affirmation of our common humanity, as moving as watching a story about the World War I Christmas ceasefires, or about people saving each other from despots and cruel tyrants (whether they be proponents of slavery, totalitarianism or Master Chef / My Kitchen Rules).

It touched me because it affirmed that sometimes we have more in common with each other than the perceived and exploited differences politicians, media moguls et al insist should divide us and make us hate each other. And that’s something real to have some pride about.

8 times I’m glad the flick never got the rights for U2’s Pride, instead going with era-appropriate King’s Love and Pride instead out of 10

--
“What you've given us is more than money. It's friendship. When you're in a battle against an enemy so much bigger, so much stronger than you, well, to find out you had a friend you never knew existed, well, that's the best feeling in the world. So, thank you” – it is a good feeling - Pride