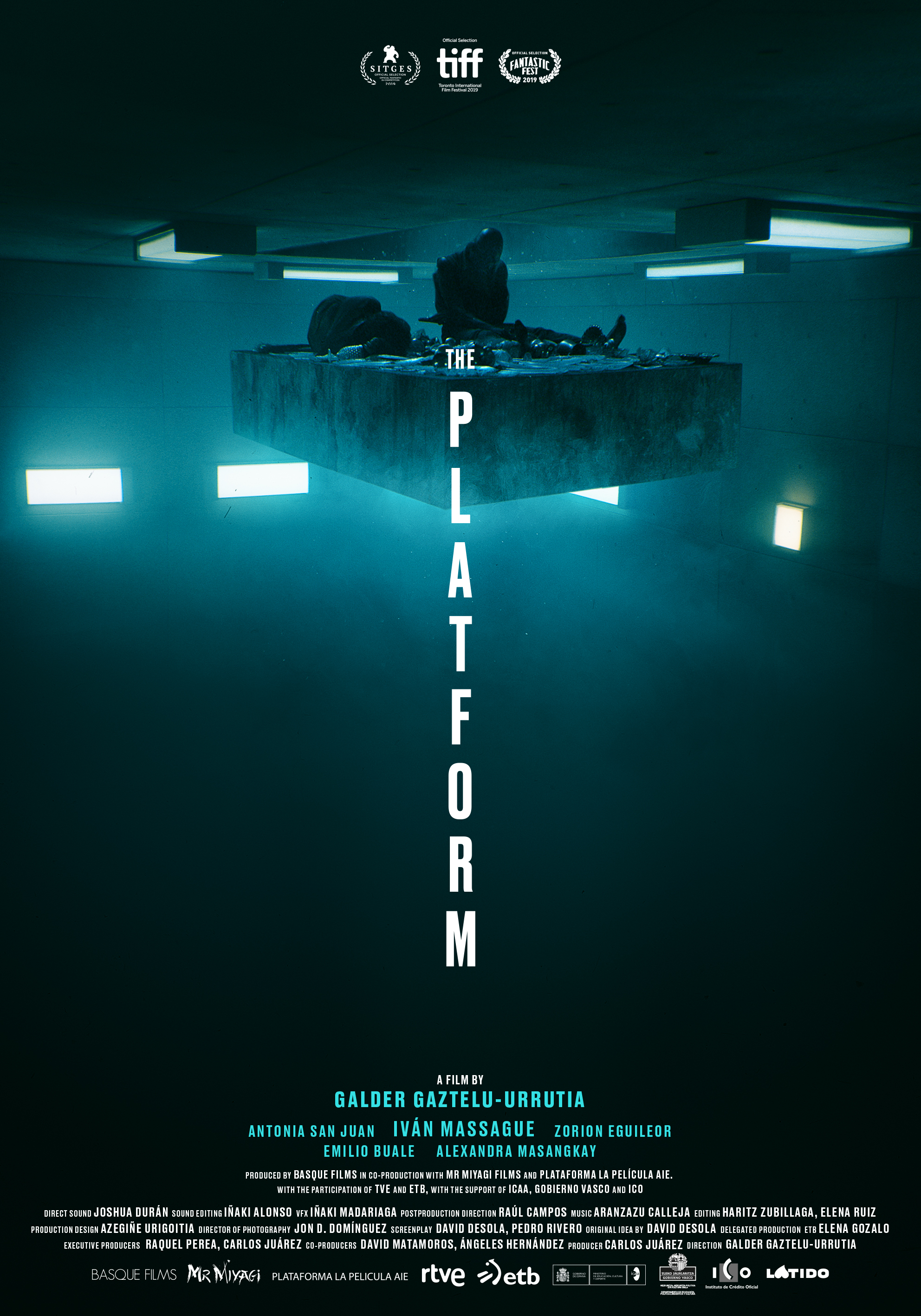 Trickledown economics in its purest and prettiest form

There’s…there’s never going to be a more obvious film about capitalism, the distribution of wealth, and the pressures involved in keeping people fearful, selfish and in conflict with those around them. And you thought Animal Farm as an allegory for the Russian Revolution was over the top with its pig called Napoleon, and its “all animals being equal, but some animals being more equal than others” line.

Orwell would probably hurl in disgust watching The Platform, but he’d nod his head in recognition.

What The Platform lacks in subtlety it more than makes up for with horrific depictions of how selfish the system needs to keep people, and that’s not even just to keep it functioning. The system works completely independently of what the people trapped on the many levels of the Vertical Self-Management Centre do to themselves or each other. And that the cruelty is very much the point.

The people trapped here are situated two to a level. The rooms cannot be escaped from. There is a hole in the centre of the room. Once a day, a platform lowers, and on it is food. It is the only source of food these prisoners can have. They can only eat what’s in front of them, not being allowed to hoard any of the food for later, which is enforced with lethal temperature controls. But whether there is any food on the platform depends on two mains factors: what floor you happen to be on, and the generosity of the people above you.

A high floor (as in 1 to 10) means you get heaps of untainted food. Floors below the 20s mean you’re eating scraps, plus the people above have no qualms about tainting the food for no good reason. 50 and beyond, well, it’s barely the aroma of food remaining.

Thing is, there’s hundreds of floors.

Further thing is, each month the prisoners are seemingly randomly moved from floor to floor.

When our main character awakes, he has the rules of the place, the lethal schematics explained to him by someone who has obviously been there a while. So our main guy Goreng (Ivàn Massagué) clutching his book (Don Quixote, naturally) needs to be schooled. He’s awakened on level 48, and when the platform arrives, mid explanation from Trimagasi (Zorion Eguileor) there are slim pickings.

Turns out that Goreng volunteered to enter this bizarre place deliberately. Like, he chose to be there, for six months, at the end of which he’ll have some kind of degree. How prestigious, to have graduated from the Vertical Self-Management Centre Academy. That’s Ivy League shit right there. Would open a lot of doors for you, doubtless. All entrants are allowed to bring one thing with them, and this guy chose Cervantes's epic about a lunatic who tilts at windmills.

Trimagasi, on the other hand, brought with him a knife. A knife purchased off the telly. A knife so good that the more you use it, the sharper it gets. And he has been in the place long enough to have lost all sentimentality towards anyone else, and, even more worryingly, no longer feels any remorse for anything he has done or will do in order to survive.

That doesn’t bode well, from an ethical standpoint, does it? Once a person sees anything they might do to survive as being justifiable, only badness follows, at least for the people around them. Trimagasi speaks in calm tones, but he has contempt for those above and below, and for his new cellmate. He has had many cellmates. Their fates… remain uncertain.

Well, you can start guessing where this might go, and it does. The Platform conjectures a system so awful, so barbaric, that it essentially forces people to eat each other or themselves or both in order to survive.

Before things go completely nuts with Trimagasi, he does tell Goreng about a woman called Miharu (Alexandra Masangkay), who, regardless of what level she ends up on each month, rides ever downwards on the platform, in search of her child. When people point out that there are no children in the tower, it does not make any difference to Miharu. Oh no. She isn’t a self-serving jerk making arguments as to why she’s not to blame for her actions. She doesn’t even talk, really. She is feral, but committed to saving her child, which everyone says can’t exist within the system.

I have no idea what she’s meant to symbolise, other than being a person who refuses to comply with the dictates of the system. And more power to you, sister.

A lot of people in this place kill themselves. It’s easy. The hole between floors is right there. It’s tempting for those who want to opt out completely. But it’s also another example of how while people have free will here within the system, their choices aren’t free. They ‘chose’ to come here, with their own one item, but none of their choices really seem like choices. Everything is coerced except the choice to be absolute jerks to anyone who is on a floor below you.

Of course these levels and strata are easily transposed to classes within any society with a capitalist, free market system, with the ones at the top getting the most and the ones at the bottom getting nothing but a painful death, but it’s not even that simple. Whereas Goreng had a cellmate that is advocating selfishness at all costs, his next companion (Antonia San Juan) actually believes that if she can convince the people on the floor below her to be less selfish, spontaneous class consciousness will arise, somehow magically making everyone in the tower considerate and altruistic.

In other words, impossibly naïve. She is, however, a product of The Administration itself, as she calls it. Goreng recalls that she is the one who interviewed him when he made his still inexplicable decision to be trapped here.

She brought her dog with her, which is nice, but she keeps trying with each descent of the platform, setting aside two plates, and delivering her set speech that if they just showed some consideration, everyone would survive. Naturally everyone from below just screams “Fuck you!” at her and ignore her completely, given their incentive to just barely survive.

What are you going to do? Goreng, on the other hand, knows that they need to be given additional incentive through threats. Forcing them to comply in a manner that isn’t ethical, but potentially saves people lower down? Now that’s an ethical quandary.

You can see the capitalist arguments and the socialist arguments play out in terms of what sounds like it works, and how it actually works in practice, and though this is a grim as fuck film, it’s a grim gallows type humour at play. Considering the sheer brutality and grossness of what’s on display, I would never say that this is a funny film, or that any of it is played for laughs. But it is meant to be sardonic rather than bleak, and it feels sly rather than gross for the sheer hell of it (though there is at least one scene that pushes it into Human Centipede-type territory which I definitely did not need in my life, now or ever). And that scene’s purpose is that once someone finds themselves on a high floor close to the top, anything they might have felt about helping the people below them flies out the fucking window.

Another time passes, and Goreng gets another cellmate, a big burly man with a rope called Baharat (Emilio Buale Coka), who’s never been this close to the top. He’s excited! He’s finally going to be free! He only has to climb five levels, and he’ll be out. All the couple above need to do is tie his rope around something, and then with the help of those above, it’ll be a done deal.

But the closer the people above are to the top, the more jealously they guard their status, so of course they’re not going to help him. Even worse, they have to give him a physical example of how contemptuous they are of him.

Bleugh. Goreng and Baharat hatch a plan, figuring out how they can distribute the food fairly amongst the floors, by force of course, until they reach the lowest levels, and then… I was unclear how they thought this was going to work, but then decide, with no evidence, that if they can contrive of a way that shows the people at the absolute top who prepare the meals some symbol of their contempt by preventing one of the meals from being eaten in any way, this will shake up the system and see them all go free.

Yeah, I don’t get it either, but then, as they descend through the hundreds of floors, as the situation gets more dire the lower they go, there is a final ray of hope (which, admittedly, I didn’t really get but am looking forward to understanding down the track after another viewing or doing some research online) that maybe at least one person can get out of the system before it’s too late.

Is it just a straight horror flick, is it a parable, is it an allegory? Even though it seems like it’s in the wheelhouse of those kinds of films where strangers wake up in a sci-fi prison and have to work together or kill everyone to escape (Cube, Escape Room, the first bunch of Saw flicks), it’s something substantially different. I think those films worry more about backstories, and the moral consequences of people’s actions (bad or selfish people die, good / smart people maybe survive), whereas this flick’s political agenda is front and centre, where the whole construct is meant to represent the failure of the global economic system to treat people as people, first, and fairly, second. It’s not subtle, but something as fundamental as this doesn’t need to be. I hesitate to say it’s entertaining or thought-provoking, because it’s pretty fucking gross in a lot of spots, but I guess it had a point or a purpose.

But let’s be honest, it’s not like it’s going to change the world or stop a ton of governments in the upcoming months and years from introducing further austerity measures on their most vulnerable people in order to cope with the impact the coming coronavirus-triggered global recession will have on the wealthiest people, whose wealth will contract slightly, which is something that the world cannot abide.

Expecting any film to be able to stop that kind of thing is too much. But getting to represent that mentality, and represent it well? That we can expect, and hope for.

--
“There are three kinds of people: The ones above, the ones below, and the ones who fall.” – what about the ones who skate by, huh? – The Platform