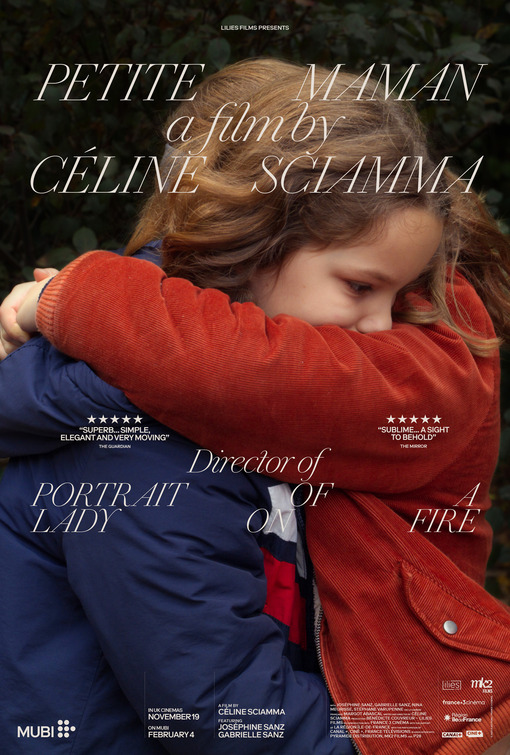 The petite mamans will inherit the earth, and all the candy that
comes with it

Little mum. That’s how I choose to translate the title. It’s probably ‘little mother’, but I ain’t fancy like that.

Petite Maman is such a tiny, small-scaled flick, with its tiny, 8 year old protagonist. She is Nelly (Joséphine Sanz), and she’s just lost her grandmother. Her mother Marion (Nina Meurisse) is stunned by grief. They clear out gran’s room at the old folk’s home, and then travel to clear out grandma’s home – the home Marion grew up in.

It’s an old kind of place (I guess, I mean I have no reference point for what places in France should look like, if they haven’t been renovated since the 90s?), and Marion’s childhood stuff is all still there, which she feels ambivalent about.

Nelly and Marion grieve in their own, confused ways, sleeping wherever feels most appropriate, pottering and such.

And then Marion leaves, because it’s all too much.

Nelly and her dad (Stéphane Varupenne) are meant to be clearing the place out over the next couple of days, but Nelly is more interested in finding the place in the woods nearby where her mother told her she once built a fort out of branches and such when she was a kid, about Nelly’s present age.

She finds the place, four trees in something of a square. There happens to be a young girl there, building the fort. I guess it’s something of a coincidence that the other girl is called Marion (Gabrielle Sanz), and she happens to look a lot like Nelly. They work together a while, and then run to Marion’s place when a downpour starts.

Even though they go in the opposite direction to where Nelly is staying, you kind of know what’s going to happen – this isn’t a mystery, or a thriller. It’s a gentle meditation on motherhood, grief, wanting somehow to say goodbye properly to someone for whom that option no longer exists, and the wondering many kids must do about what their parents were like when they themselves were kids.

They get to Marion’s house, and of course it’s identical to where Nelly is staying, only it’s back in time. Marion’s mother (Margo Abascal) already walks with the same cane that Nelly, in the present, asked if she could keep when her grandmother died. She is protective of Marion, as she is about to go to hospital for some kind of worrying surgery.

The two girls spend more time with each other, but Nelly also returns to the “present” in order to chat with her dad about stuff. Mostly Nelly worries about why her mum left, whether it’s about deeper issues, like her mum not necessarily wanting to have become a mum so early, or whether Nelly is responsible. None of this is done melodramatically, so it’s not like screaming matches and thrown crockery or anything: it’s just a little human wondering about stuff, as they must do.

The dad, who’s not a bad dad (after all, when they’re in the kitchen together, and he wants to smoke, asks her if it’s okay, before opening a window which clearly blows the smoke straight back into the kitchen), does his best to reassure Nelly that everything’s okay, and that (grown up) Marion will be back eventually. But he’s not the one she’s worried about.

The girls play in harmless, mundane ways. Thankfully there’s no firestarting or insect torture or anything. They create plays where they play multiple roles, and do dress ups and such. Nelly asks Marion’s mother to help her put on a tie.

Time grows short, and Nelly doesn’t want to keep her secret any longer, and tells Marion that she, Marion, is her mother. Instead of this freaking the other eight year old out, like it would any other eight year old on the planet, she’s cool with it, even at one stage asking to hear some music from the future on Nelly’s headphones.

They go from being fast friends to also being co-conspirators, as they don’t share this unique set of circumstances to their respective parents, who probably wouldn’t understand.

Where Nelly had been upset about not saying a proper goodbye to her grandmother, who seems like she was a bit of a manipulative malingerer scrounging for sympathy, always saying stuff like “say a proper goodbye to me, you never know if it’s going to be the last time, I could go any day now”, Marion reassures her, telling her than she is already saying that kind of stuff, 21 years in the past.
When Nelly wonders whether Marion will actually want to be mother to her when the time comes, in probably one of the sweetest scenes of the year, Marion says she thinks she would have, because even now she occasionally dreams of being her mum.

This isn’t the kind of flick that you can approach with any impatience or cynicism, because very little happens, and none of it is overly dramatic, and if you’re not in the mood for a movie about mothers and daughters, feel free to watch another Fast & Furious flick on Netflix instead. The mechanism of how or why any of this is happening is never explained, and nor does it need to be. We understand that it happens because Nelly needs or wants it to happen, to help her understand her mum a bit more, and to deal with a place and set of feelings she’s not ready for (we’re never ready for it at any age, truth be told).

We retreat into our imaginations sometimes in order to hide from harsh realities, but that’s not what this feels like, even if it is metaphorically a mechanism with which to ease one’s anxieties at a time when they are overflowing. The two girls are delightful to spend time with, and try to deliver all their dialogue as naturally as possible. Although there’s something curious about the moments where they’re ‘playing’ characters in their improvised plays – they’re so much more melodramatic, when they’re pretending to be adults, but there’s something so enjoyable about it, including the way one girl compliments the other, and the other says “It’s my dream to be an actor”. When she’s, you know, starring in a Céline Sciamma movie that’s been lauded all over the world.

Her earlier epic Portrait of a Lady On Fire took the film critic / review world by storm, and this flick is no less praised or well regarded. It’s just that the earlier flick was so much more complicated, and, included, arguments about what the ending of the story of Orpheus and Eurydice meant, about whether women are better off living only with women, and whether the daughters of aristocrats have things worse off than women artists.

Petite Maman is no less personal-feeling, or intimate, but it feels like a perfect miniature compared to the earlier flick, which also included the image of a young woman whose dress catches fire, which is, you know, pretty evocative.

The two twin sisters who play the main roles of Nelly and Marion are wonderful to spend time with, and deliver wonderful performances without ever being precocious or wiser than their years (ie. junior mouthpieces for overly clever adult dialogue). I really enjoyed this flick, it moves quite easily, but it’s pretty short. It felt like it was barely over an hour, which is okay in my book, in this maximalist age.

Petite Maman. Tiny mums and their tiny daughters. They all have feelings, too.

8 times they never even fight, which is the flick’s greatest implausibility out of 10

--
“I’m going to give you a present.”
- “You’re going to shave your beard?”
“Yes.” – shaving one’s beard off is apparently the greatest gift a father can give his daughter - Petite Maman