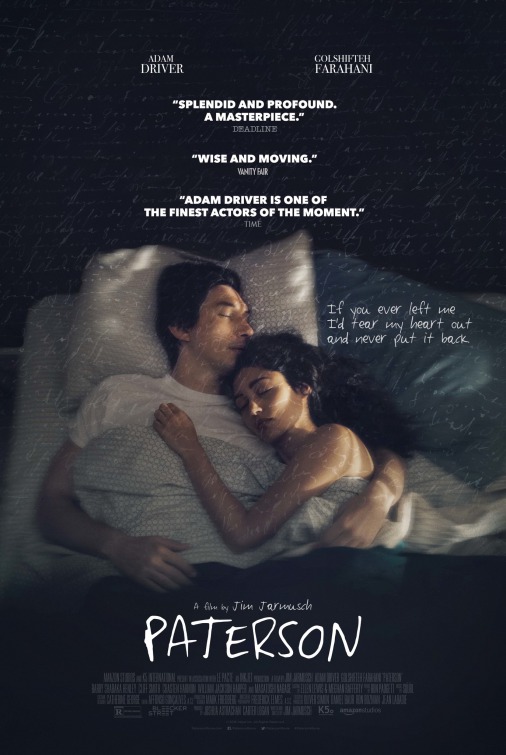 It’s not so much an anti-elitist kind of argument, because it’s not as if the efforts of an ‘amateur’ artist are being directly compared to anyone else. It’s more of a personal stance, since the protagonist, who spends much of his time and energy thinking about his work, discounts his own efforts and doesn’t outwardly acknowledge them out of… who knows what. Fear of being pretentious, or of being seen as being pretentious, or perhaps of being found wanting. It’s never made literal within the flick, but it’s there, especially when, instead of actually articulating verbally “I am a poet” he’s content to just be whoever he is.

I am neutral on the topic of whether Paterson the town is particularly wonderful or not. It’s just a place, and, yes, maybe some amazing people came from there. But the place is just a place. Anyone can say the same for whatever place they came from or really love. I mean, not me, I’m never going to make a movie about Moonee Ponds, and how great it is, because Dame Edna Everage came from there, and there’s probably a statue of her somewhere. There’s definitely a statue of her, I’ve seen it. It’s terrifying.

And there’s probably a low-rent bar or pub there, probably the one on the corner of Mt Alexander Road and Ormond Road, with a dinky neon sign that says “bar” on it, like it could be anything else. And in it there could be a young couple in the push or pull of a failing relationship. And all sorts of other moments of quiet desperation and even quieter joy could be happening there.

But they happen everywhere, don’t they? In every city and town across the world, from Tennessee to Teneriffe. The difference, here, is in the observer, being Paterson, the man.

He lives an ordered life. Gets up pretty much the same time every morning, without an alarm, his mind obeying some internal clock. Walks to the bus depot where he works. Writes a few lines before starting his route as the driver. Adam Driver playing a bus driver called Paterson in the city of Paterson seems like an inward-spinning spiral of self-reference, but Jarmusch is too cool for that to be a joke.

He drives, has his lunch break at pretty much the same spot, goes home, straightens the crooked letter box, says hi to his partner Laura (Golshifteh Farahani), they eat and exchange a few words about their day, she telling him about what she’s painted black or white, and about something she’s passionate about (that day), he walks the dog, has a beer at his local, and the day ends.

With mostly minor variations, every day in the movie proceeds the same way. Just like, you know, our lives.

The every day. Everyday. The solid solemnity of repeating the same actions with minute variations every day. In a different film this repetition would be used to show how the soulless drudgery of the quotidian wears a person down until they throw themselves in front of a train, or something happens which forces them out of their daily routine and into some kind of transformative adventure that completely alters the ebbs and flows of their lives.

But this is this film. The repetitive nature of Paterson’s life isn’t a bug, it’s a feature. And it doesn’t impinge on his ability to create. He writes his poetry with the same attention and presence of mind that he brings to his work and to all his interactions over the course of the day.

Thankfully the film avoids another trap you can easily imagine, which is the kind of lazy “being an artist is oh so important” drivel that would have made Paterson’s pursuits the antidote to the perceived drudgery of his life. The film can affirm, and does, that pursuing something passionately or with some focus is grand and worthy, without pretending that it makes any dint necessarily in the array of elements that make up the fabric of our lives and the life we lead with the people around us.

It’s all too common for these kinds of stories to take the shape of a triumph of the will / pursue success for its own sake narrative, where whatever the ‘thing’ is that some nobody is ‘good’ at, needs to be affirmed publically or in the form of some kind of competition, so that the ‘doing’ of the thing itself is never sufficient: it needs to be validated externally with applause and adulation, and, let’s be honest, money. Big Cash Payoffs. Giant Cheques. Serious Bank.

Otherwise, it’s seen as wasting one’s talents and opportunities in this Brave New Capitalist Age that we live in, and that’s less than shit.

And, lest that other poet of the modern age go ignored, we apparently have only One Shot Lose Yourself in The Moment This Opportunity Comes Once in a Lifetime etc etc.

Paterson is, at all times, low-key. It doesn’t ever get mentioned, but there are two scenes where a photo in a frame on the nightstand by the main couple’s bed is visible, and it’s an image of Paterson in full Marine ceremonial dress with a whole host of medals and commendations. It’s shown once at the beginning as he leaves for work, and then once again after a certain incident occurs.

What does it mean, or what’s it meant to indicate about Paterson? I’m not entirely sure. I don’t think it has to mean that much about his character. I mean, we can extrapolate and such, and by “we” I don’t mean you and I, I mean that I can’t help myself by ascribing all sorts of additional meaning to it, like, seeing as he’s a veteran of some of America’s latest conflicts, there’s a chance he has some PTSD, but that seems like a bit of a stretch. He’s not so much emotionally shut down, as a lot of veterans are represented as being when they return, except when they talk about that one triggering event that makes them so incredibly miserable and unable to even look at their own kids.

He is certainly reserved, but considering the level of thought he gives his writing, the level of soulfulness we imagine him possessing because of the variations we hear in his poetry as he thinks it out to us, we could feel that maybe that thoughtfulness is not a negative aspect of his experiences, but maybe even a product of it. A lot of great poets (the ones who survived) came out of many of Britain’s wars, so why can’t the Yanks have a bit of that glory too, huh? Huh?

His partner Laura is certainly not emotionally reserved anything like that. I don’t think you’d ever describe her as low-key. Not that it’s a thing, but she’s definitely high-key. Whether it’s enthusing about a new guitar or about cupcakes, she’s the one exhibiting excitement about a whole range of stuff that Paterson musters a polite “that’s nice dear” every now and then to do his duty. It’s not represented in as sexist a fashion as I’m implying, but it’s not far off. It’s almost implied like ‘real’ men are naturally stoic, and women are like excitable flibbertigibbets, as if they’re from two different planets or something.

Stuff does happen in the story, but it’s everyday stuff, and it continues being mostly everyday stuff until nearly the end, when something personally devastating but minor in the scheme of things happens to Paterson. It’s so devastating, in fact, that he almost expresses an emotion to someone about it, and it makes him wonder if he should even bother with his life’s work any longer.

Perhaps something or someone completely random will come along and inspire him to keep going? I was hoping that it would be the ghost of Jesus or William Carlos Williams or Hart Crane or Pablo Neruda, or even Roberto Benigni, reprising his character from Jarmusch’s early film Down By Law, but no such luck.

It seems like a bit of a reach to even describe this film as a beautiful, thoughtful comedic approach to representing the nobility of giving a shit about your daily existence and not being fixated on some time deep into the future, and caring about something that seems minor, but deeply, and yet I think that’s possibly the best phrase I could come up with to describe this flick. If you’ve loved Jarmusch flicks over the decades, then seeing many elements of Paterson as a comedy, as flat out funny, would make sense. Tell someone who’s never watched a single one of his flicks that this is funny (like the payoff of the reoccurring image of the leaning letterbox, or the seemingly dangerous situation in the bar resolved so quickly, or the bus station bus complaining about his many troubles) and they’ll scream at you “Nuh uh! This ain’t no Adam Sandler film!” It’s not that it’s subtle, but it is almost an ineffable, ethereal approach to humour.

On top of all the other solid little scenes, the conversations Paterson overhears on the bus are almost like illuminating plays in and of themselves. The two guys boasting about how close they almost got to scoring, or even better, a girl and a boy who looked a lot like the central couple from Moonlight Kingdom talking about Italian anarchists; all gold, and they all bring a wry smile to Paterson’s face, and mine too.

I loved it, and I enjoyed it, and I was inspired by it and a little bit demoralised by it, but in a good way. It’s solid, like its main character, and like the feeling you get when you feel, deep down in your bones, of knowing what it is that you’re meant to be doing to give yourself meaning.

8 times Paterson shouldn’t have killed Han Solo, though, out of 10. That was a bit rough.