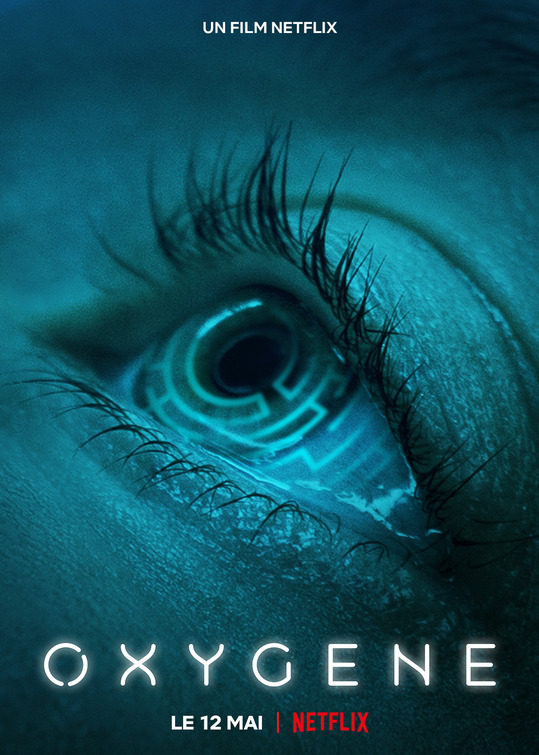 How strange. This flick pretty much occurs in one location, with one actor. There are images of other people, and a couple of voices, but really we, like she, are trapped in place.

I guess we’re all trapped in place when we’re in a cinema (or at least what I remember about cinemas from 100 years ago, 1 covid year = 100 calendar years), but for this I was trapped on my couch as the captive audience for this Netflix Exclusive!

And I found it pretty compelling. I mean, I do get a little claustrophobic watching things like this (another great example is the Ryan Reynold’s flick Buried, that’s kinda and kinda completely not similar), but I think you’re supposed to, just like the character. This starts with the simple premise that these kinds of flicks often start with: person wakes up in a box that it appears they can’t escape from, and oxygen is running out.

The person here (Melanie Laurent) is French, so presumably everything that transpires is happening to a French person, including a disembodied voice that talks to her in the flat emotionless tones of HAL from 2001: A Space Odyssey (Mathieu Amalric) which also speaks French.

The inside of the box looks pretty high tech-ish, so we can assume that the future is possibly French? Tres chic! The men will all be boorish sexist pigs and the women classy and sexually confident?

Um, we can do better.

The additional problem the lady here has upon waking is that she is wrapped up in a whole bunch of stuff, with wrappings, and masks and cannulas and straps and all sorts of things, but also doesn’t remember who she is, or why she might be in such a contraption. The disembodied voice, let’s call it Milo, for whatever reason, answers some questions put to it, but not others. There are limits to what information it can access or tell the occupant of the box / pod / super high tech coffin.

It can’t tell her her name. It can’t tell her why she’s there, it also can’t release her from the box. But what it can do is tell her that the oxygen supply to the sealed pod is depleting rapidly, and she coincidentally only has about as much time to escape as the film seems to have remaining in its running time.

The woman in the box might not know who she is or why she’s there (has she angered some kind of high tech serial killer / kidnapper? Was she dying and was she put in the box to keep her alive? Is this some kind of state-sanctioned punishment for her crimes against humanity?), but she has that believably human drive to survive. She pieces together whatever she can find out, and however far she can reach within the pod in order to try absolutely everything in order to either escape or survive.

With something like this, of course OF COURSE it can be very frustrating to watch. You know that nothing they do is likely to work, if it’s going to work at all, until close to the end. If it’s a “bottle”, one location story like this, it’s not going to go any other way. So your hopes are raised, like hers, many times, and dashed again and again, giving way to the next glimmer of hope or brainstorm, that starts to raise her / our hopes a little, then a lot, only to be dashed again.

It’s a delicate balance getting those sorts of rhythms right. I reckon a lot of impatient people will give up well before the end, which would be a shame, because I think this is a pretty solid entry in the genre of “people trapped in a box who are most likely going to die”.

It is, however, far more complicated than that, far more complicated than these films usually are. Buried has a chap trapped in a box trying to find a way to be found before he asphyxiates. Kill Bill has, in one of its many sections, a woman trapped underground in a coffin, with a 45 minute backstory explanation as to how she could possibly have the skills to get out of such an impossible situation (which is kinda unnecessary, since the whole flick is a hyperviolent cartoon, enjoyable as it is). The original The Vanishing has a guy wake up in a box with no chance of ever getting out. The American remake of The Vanishing has Keifer Sutherland wake up in a box, and have to be saved by Nancy Travis before he asphyxiates.

The solution to who the person in the box is, in Oxygene, is only part of a puzzle so complex I’m not even able to refer to almost anything past the opening minutes other than in the most abstract of ways. Finding out who she is might seem slightly unimportant in terms of her first priority being not dying, but it’s integral to why she’s there. And when you’re trying to call the cops and telling them that you’re trapped somewhere by someone, it helps if you can say who you are and where you are, neither of which our poor pod person knows at first.

And when she finally finds who and where she is? Well, that brings up thousands of other questions and problems.

It runs the risk of alienating viewers, but I actually think it does pretty well with its ever expanding, ever escalating complications. Our pod person faces severe risks from outside the pod, but because of the high tech nature of what she’s trapped in, and the very literal programming of the program that oversees the pod, she is in plenty of danger from Milo as well, who is always kindly offering to sedate her if she feels too stressed.

Melanie Laurent, I am assured is a decent enough actor (who I only mostly know from Inglorious Basterds, and that film with Christopher Plummer and Ewan McGregor Beginners), but she has to carry this entire flick on her shoulders, and for most of the running time she only has the bland, ever patient Milo to converse with. It’s a lot to do and a lot to convey with not much scope, and she acquits herself quite well. The more we get to know about her character, the more complicated the character becomes, but even then the flick keeps finding new ways to pull the metaphorical rug of identity from under her feet time and time again.

She does a great job with a really high stakes, high concept premise, putting a human face on some fairly out-there science fiction concepts, and doing the integral thing of making us believe we’d hopefully tackle things in a similar way if we ever found ourselves in such a fucked up situation.

In a manner which I haven’t really been able to figure out, in terms of its significance, there’s a weird use of almost religious imagery around the main character, with some shots depicting her almost as a medieval saint of some sort. I can safely say (with no evidence) that Christianity or faith of any stripe or flavor plays no part in this story, other than the desperate hope and belief that one may survive for just a little bit longer if they try hard enough, but there’s no ambiguity about Our Lady of the Pod being depicted with a halo around her head and body, from particular angles.

This French director has mostly made bunches of horror flicks for most of his career, some that are probably better than others, but most which really didn’t do much for me. The relative restraint forced onto the production with this setting and premise, and the fact that though the screenplay was written in 2016, the film was made during last year, means this is the perfect flick to make during a global pandemic.

Most shocking was seeing scenes, flashbacks or memories, however you choose to define them, showing the world succumbing to a horrible virus which…damn, now that’s prescient on their part.

I’m sure Melanie Laurent isn’t going to work on such covid-safe productions again unless she somehow only does one woman shows all the time, but she should be proud of her work here.

Oxygene is really good, has a surprisingly surprising ending (which, in the weirdest yet somehow most organic way, ends up reversing the process of how the flick started) and kept my interest and stopped me from just watching I Think You Should Leave instead again for the millionth time, which is something I do whenever I’m frustrated by something I’m watching on Netflix (which happens weekly). It’s one of the best Netflix Exclusives! I’ve seen since, probably, the Spanish flick The Platform, though not as potent on a sociological / anti-consumerist level.

Oxygene. We all breath it. Don’t take it for granted.

--
“Why is this happening to me?” – said by every teenager in the world since the start of the world - Oxygene