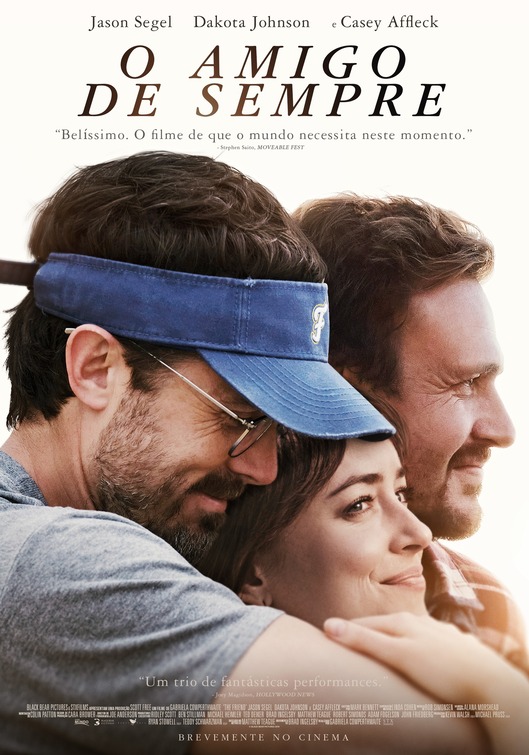 Friend doesn't seem like enough of a word to describe him

Because of…because of a lot of stuff happening at the moment, I couldn’t bring myself to watch something violent or action-y, nor could I stomach horror or anything else, so I really wanted to watch some deeply felt human drama.

Not drama in the sense of people yelling at each other or throwing glasses of wine at their frenemies, but something about human stuff, and how humans deal with it all.

I remembered having read the article this was based on, or at least a part of the story a year or two ago, and I thought “this looks like a bundle of laughs”, so I gave it a go.

It served its purpose. It’s on the surface a story about a couple where one of them is diagnosed with cancer, and the friend that comes to help and stays over during the difficult days, weeks and months. But, really, it’s called Our Friend for a reason.

The reason seems to be the incredulity with which people confront Dane’s choices and existence. No-one, other than the primary couple of Nicole (Dakota Johnson) and Matt (Casey Affleck), seems to understand why Dane (Jason Segal) would do what he does. He and his choices are viewed almost with suspicion, but at least in general with head-shaking wonder. “I wouldn’t do that for someone if I didn’t have to” seems to be the refrain, but in another case it’s viewed mostly as proof positive of what a total fucking loser Dane is.

It’s profoundly unfair. I have no doubt that Dane’s story is a complex one. It’s not really gone into here with any great depth. It’s implied that he struggles with depression, and that at one point he’s perhaps suicidal. But much more of this is indicated by other people’s perceptions, rather than anything Dane himself expresses.

Is it more about men? Men’s inarticulateness in terms of expressing their emotions? You could see the whole article being about Matt wanting to say thank you to Dane for helping his family out during a terrible time, one which did not have a happy ending for Nicole, obviously. And so the film by extension becomes an extended thank you to Dane for being there, for helping where he could, where many others clearly think they wouldn’t have.

You know, you could have just said something more than “thanks doesn’t seem like enough”.

It doesn’t really seem to be about Nicole. She’s the one dying, but mostly the film flicks around (with its very disjointed timeline) showing that Matt and Nicole were very happy together, except when they weren’t, and that Matt spent a lot of time away from his family working as a war-torn, battle-hardened war correspondent, and more importantly once had the opportunity to cheat but didn’t, and Nicole, upset about being virtually a single-parent to two daughters, does cheat.

C’mon, man, you didn’t need to go there. Nicole sings and dances in musical theatre, but that’s no reason to malign her further. The only reason I think you’d go there (other than just telling the “true” story of their lives together), is that it makes Matt look like even more of a saint.

So is it Matt’s story? Kinda. I mean, he’s the one telling it, he’s the one documenting the madness that ensued after Nicole’s diagnosis and rapid downward spiral healthwise. One could make the argument that much of the messiness of what it’s actually like has been left out of the screenplay, to make it less confrontational, and more palatable to mass audiences. To that I would argue thusly: most of us, by the time we get to a certain age, have already lost someone close to us because of some terrible disease, cancer or something else. We do not necessarily need dramas depicting the real awful shit we’ve already lived through.

The point the flick makes is that dying like this is fucking hard and fucking terrible, for the person it’s happening to, and the people around them. I think the flick does perfectly well getting that across. Caring for someone at this stage is hard, and systematic once you get routines in place, harrowing, peaceful, frantic when things go wrong, boring, loving, exhausting, draining, terrifying, contradictory, all sorts of stuff, and I think the flick makes its point very well that having Dane there was probably a tremendous help for Matt, for Nicole, for their two daughters, and that he’ll always be grateful, and that’s enough, isn’t it?

I like Jason Segal well enough, as in I feel like I personally like him a lot, but he’s very much an obvious actor. I know what that means in my head, but I’m not sure that it translates with the written word. This isn’t a well-crafted or subtle performance. “Be sad looking in this scene” yells the director, and Jason is sad in that scene. “Look slightly less sad in this scene, like you’re not a total sadsack”, and he is slightly less sad. “In this scene, you are confused” and he is confused looking, unsure of himself. It takes him a lot of obvious effort to put anything across emotionally, and I guess it works for an emotionally shutdown character struggling to find their way in life.

Casey fucking Affleck has no such problems. After being rewarded for playing a completely shutdown jerk in Manchester-by-the-Sea with an Academy Award for best actoring, he’s decided, fuck it, shutdown jerks is all I will play for ever more. He seems eternally tired and drained, from beginning to end, whether cancer has reared its ugly head or not.

Maybe that’s true to life. Maybe he just doesn’t need to put in much effort, or maybe this is what guys relate to in movies: emotionally inarticulate guys enduring all of what life throws at them, getting through to the other side, and then thinking “so now what?”

I can’t fault them that. There’s a time and place for big emotions, and cathartic moments, but I think this flick does well, better in fact, without them. It takes a somewhat practical approach to it all: You get through as best you can, with the help you have, until you can’t anymore, and then the terrible thing is over, and you breath again, and go on with what life you have with the people who are still there.

The question keeps coming up as to what Dane is doing, to the detriment of what is seen as his own life, and I don’t think it’s answered in any satisfying way, and I’m not sure it really could have been, unless he brings out his own book about his experiences. The film mostly shows the women he’s in relationships with getting sick of his lack of commitment and his self-abnegation in the face of his support of the Teague family (Nicole and Matt). Why does he always have to defend himself? If he was the kind of friend who, when they hear that someone they know is going through a tough time, you know, like dying, if all he said to them was “well, if you need anything, just give us a call”, and then never spoke to them again until after Nicole was dead, to express his thoughts, prayers and condolences, well then, he would only have done as much as billions of other people would have done, and the fucking story wouldn’t be called Our Friend.

And that’s a pretty cumbersome title. I think it works better as is, honouring Dane for what he did, and honouring Nicole, as well, for what she went through. The strong scene which the flick starts with, is echoed about halfway through again, when Nicole decides it’s time to tell their girls that she is not long for this world. On the advice of one of the doctors, she asks Matt not to use euphemistic language like that’s she’s going to heaven or on some mystical kind of trip or journey.

When the scene is replayed, Matt comes right out and just says “Mommy is going to die.”

It is devastating, as it should be. It must have been horrible for all involved, and I really felt that. There are many other emotional scenes, but I never felt like I was being goosed or manipulated into feeling worse than I needed. Even a scene where Nicole decides to write a bunch of letters to her daughters to be read at distinct points in their lives, which could have been treacly mawkish bullshit is handled beautifully.

I feel sad for this family, and for everyone who loved Nicole, and that’s okay. And I feel a strange kind of pride in what Dane did for them, regardless of the negative connotations people project onto him, for what he did, for being brave and selfless, and kind, regardless of his own struggles. People like that should be celebrated. Emotionless brutality seems to be what movies prize most in men, so it makes for an enjoyable change to have men being celebrated for something else for once.

Our Friend was what I needed to see at a point in time, and I hope I am the better for it. It’s not feel-good cinema, but neither is it a traumatic wallow. It’s what it needed to be.

8 times Our Friend seems like a strangely coded “friends of Dorothy” kind of reference that never really pans out, out of 10

--
“Getting your shit together is overrated.” – truer words rarely ever spoken - Our Friend