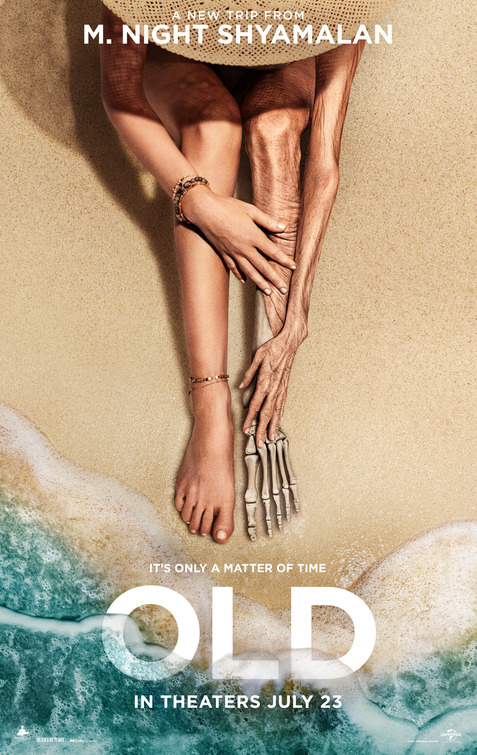 Sun protection is important because the sun hates us

I don’t think there is a three part name that inspires more dread than M. Night Shyamalan. Either that or derisive laughter, take your pick.

Every time he has a new film come out people fall over themselves to say “it’s finally a return to form for the director of The Sixth Sense”, and every time they’re wrong. Every time Shyamalan makes another movie he finds new ways to make actors sound like speaking in human languages with human words is an almost impossible feat.

Dialogue so bone-headed, so ripe that it defies the best efforts of even decent actors, let alone crappy ones. This film Old is really delightful, no, it really is. It’s about a family, and some other people, who go to a beach, and the beach ages people really quickly. Like, a day is like 50 years.

So when the flick starts, you have a mother saying to her tween daughter “Oh, you have such a lovely voice, I can’t wait for you to grow up”, because little does she know that by the end of the day, her daughter will be collecting a pension.

From the perspective of what happens on the beach, it’s actually well done, sort of. The mystery is actually mysterious for much of the flick’s length. It gives you time to wonder as to what’s actually going on, whether there’s a cautionary tale aspect to it, like, appreciate what you’ve got in the present instead of living in the past or the future (a fighting couple actually say this in dialogue to each other), or don’t take your kids on a holiday as part of a ruse in order to tell them at the end of the holiday that their parents are separating.

I mean, worst holiday ever, unless you want your parents to separate, in which case, yay?

You wonder if the people running the resort on this immaculate island are like Mr Rourke on Fantasy Island, giving people what they think they want, only to see the folly of their grasping greed or how the path not taken is way worse than the trodden one, for it all to be revealed as a dream at the end, the dreamer relieved that the bad things didn’t actually happen, returning chastened to their regular life.

No. It’s none of that. It’s an explanation so bad, so terrible that I laughed out loud. I didn’t send the abbreviation to someone in a text message, I actually shook my head and guffawed, and said out loud “M. Night Shyamalan, how do you keep getting to make movies?”

I mean, the twist endings to his flicks have been somehow getting dumber and dumber over time, but he seems to be actively coming up with the worst possible explanations to his own movies now, kind of like a god who loathes his own creations. I mean, I don’t want to spoil anything, but seriously, this has an even dumber explanation than his last movie, which had a secret conspiracy of people who kill superheroes and all have the same tattoo and conduct secret meetings in public places.

If I said “Big Pharma” was the villain you’d think I was joking, but honestly…

On the most simplistic level, the only level upon which this flick can be enjoyed (there is nothing going on allegorically), when the family and other people get trapped on the beach and can’s figure out what’s happening until it’s too late, it actually works because no-one, including us, knows anything. We aren’t privy to what about this beach is causing these effects, but it’s somewhat interesting to see what these people go through, and what terrible words they will use to describe their experiences to each other.

This is the bit I’m going to relate which sounds the most made up, but I swear to gods this actually happened. I saw it with my own eyes. I have witnesses. The primary family unit that goes to the beach is Guy (Gabriel Garcia Bernal) and Prisca (Vicky Krieps), who both awkwardly speak in English to each other like they’re tourists trying to order off of a menu they can barely read, but there are more people on the beach. Including. A Rapper. Who the kids recognise.

The rapper, in their world, is world famous. A World Famous Rapper called. I am not making this up. He is called Mid-Sized Sedan (Aaron Pierre).

Huh? What the fuck? Why would you even do such a thing?

Mid-Sized Sedan is successful and world famous, but his name is Mid-Sized Sedan, so it is impossible to take that name or the character seriously. You have to wonder what names he rejected on his climb to the top. Modestly Priced Hatchback? Roomy Seven Seater? Kia Sportage?

He is haunted, not just his poor life choices, but because he was the first person we saw to lose someone, being a blonde partner who swam into the water and never returned. He also has hemophilia, just for something to do.

There is also a doctor (Rufus Sewell), who clearly doesn’t like black people, and he even, intending to prove a point about how time is passing differently for them, starts stabbing people and then saying “ya see, ya see? What did I tell ya?” But he only seems to say it to black people.

There is a nurse who introduces himself, before all the kookiness begins, to the doctor, bellowing “I am a nurse. My name is Jarin” and then a few seconds later again yelling “My name is Jarin!”

Okay, man, chill out and back the fuck off. Maintain some social distance and some dignity.

There is a lot going, but it doesn’t all amount to much, because I think, like always, Shyamalan came up with a premise without a story, and then just mixed and matched the kinds of generic storytelling devices and paper-thin characters he so adores. Everything is better before the explanation, before the “solution” is found to the problem, being how to get off the beach.

Brother and sister Trent and Maddox (played by lots of different actors) eventually figure out a way out, but it’s by a solution so contrived, so fucking silly that I’m not even going to relate it, because Shyamalan thrives on any attention, and doesn’t care how negative it is. It all feeds him and makes him stronger.

The storytelling is so inconsistent, the stuff happening on or around the beach is so random and so poorly thought out. I have no idea what kind of film this is. Maybe it’s a horror flick? It’s not much of a thriller, it’s more of a mystery, it’s definitely not a credible drama. The relationship problems of the primary couple don’t really matter anyway, because they’re all going to die anyway. There is a bonkers section where the doctor with the knife starts slashing at Guy, and at one point his wife steps in to take the slashes, and then they swap over, and it’s meant to be, I dunno, romantic or something?

But all it reminded me of was another flick with Gael Garcia Bernal, an actor I greatly enjoy seeing in most things, called The Loneliest Planet, where he momentarily put another woman in harm’s way to protect himself.

I can’t say I really cared about any of the characters, although obviously when the kid characters are still kids I didn’t want any harm whatsoever to happen to them: They’re kids, for fuck’s sake. When bad things happen to Rufus Sewell or his bony wife who goes very strange towards the end and turns into a pretzel, you kind of shrug and think “well, that’s about right.”

It has been wildly successful for a latter day Shyamalan flick, so no doubt Shyamalan will keep getting money to keep making his dumb flicks. This one had a beautiful island at least, and some top notch cinematography to really capture the stupidity of the doings that .

--
“First time they wish they were Black.” - the only good line in the flick delivered well - Old