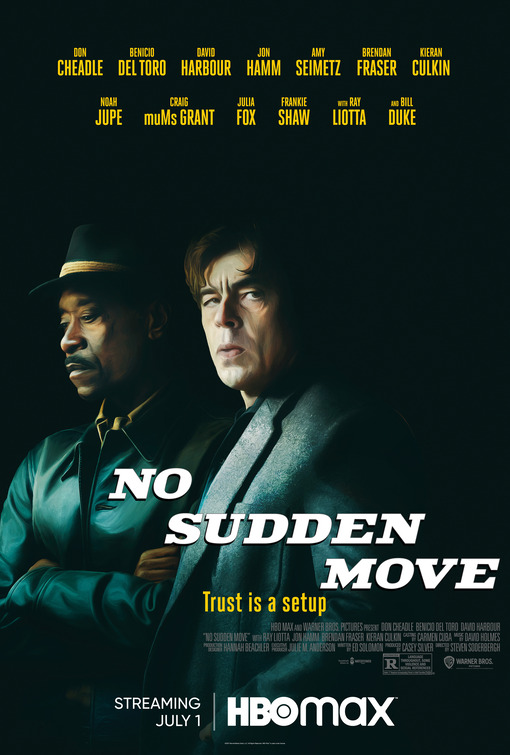 These guys, they are dangerous and ambitious, but they are
not as dangerous as those car companies.

It’s been a while since I’ve seen a movie that had “crime doesn’t pay” as its ultimate message. I mean, every film before the 1970s used to have that message: cops are good, crooks are bad, if you crime, you’ll die etc.

Even though this is set in 1950s Detroit, though, and this being Steven Soderbergh, who I’m sure said he was going to retire from filmmaking years ago, the ultimate message actually ends up being: crime doesn’t pay for you low-level shmucks; it only pays off for the fuckers at the top, to whom all money will flow regardless of the outcome.

Although, honestly, me saying that’s the point based on the outcome, and based on a speech a strange character delivers towards the end about how easily the $375,000 he’s being forced to give up is going to flow back to him anyway, skips the point that this film is really about showing us how the people doing stuff, legal or illegal, aren’t the ones that benefit from it. That everything is constructed thus to always benefit those who constructed the way the world works.

There’s a word that describes that view of the world, I just can’t put my Marxist finger on it just this second…

This was a pleasure to watch, most of the time, because there are a bunch of great actors in this, and they’re given time and room to breath and just exist as these people. I don’t mean that there are contemplative scenes where people shoot the breeze and talk at length about their motivations and histories and lives / personal philosophies. Way too much happens in this flick from a plot perspective, way too much, so there’s no time for such scenes. But what you have is people discussing what their next move should be, and why, in ways that might be consistent with who they are, and it’s plenty.

Three crims are hired by a handler to terrorise a family and force the jerk dad of that family (David Harbour) to go in to his work and steal a document from his boss’s safe.

It sounds simple enough, but everything perpetually goes “wrong” that you can imagine. The patriarch of the family, Matt Wertz, isn’t completely blameless in what’s happening, and is sleeping with his boss’s secretary, who expects him to leave the family now under siege.

Of the three crims, Curt is straight out of prison (Don Cheadle), the other is some kind of young psychopath (Keiran Culkin) and the third has the thickest head of hair I’ve ever seen on a human male (Benicio Del Toro). Del Toro’s character, Ronald Russo, is uncomfortable working with an African-American, because racism. He never utters the word you’re pretty sure he wants to say, but he often summarises an entire group of people with massive generalisations about greed and other dumb shit.

The three crims work okay together, because they’re professionals, but each of them only has partial information, and the main reason they’re being used is because of expendability. When complications ensue, some of them are more likely to turn on the others at a moment’s notice.

The thing in the safe doesn’t seem like it’s that important at first, until it becomes massively important (as in, what it actually is, versus how much certain people want it), and then it’s revealed that it’s not even in the safe.

Even with many or most of these characters being crims, the real delight is in a scene where someone not of that world is forced, forces himself through circumstance, to do something he’s never done before. Even though it’s David Harbour playing the character, who we might remember from such films as, uh, Black Widow which I saw a couple of days ago, or the unloved Hellboy reboot, or, better yet, Sheriff Hopper from Stranger Things, the character is an accountant.

So when he’s forced to thug up, he has no idea how to do it, and in one of the movie's most darkly comic moments, needs to, has to, threaten his boss with a beating. The guy has clearly never had to deliver a beating to anyone (which is a good thing; it’s not like I want to sound like people should be doling out beatings to resolve their interpersonal conflicts or anything, because fucking hell that’s the very definition of toxic masculinity).

But how he works himself up to do it, what he feels obligated to say “Now I am going to punch you, this is going to be a punch” is strangely sublime.

The intricacies of the plot are such that it might be hard to follow. I didn’t find it impossible to follow, but I did find it damn hard at some times. Curt has some outstanding debt / leverage over a local crime boss (the legendary Bill Dukes), and Ronald has some friction with the local mafia goon (Ray Liotta), on account of the fact that he’s having an affair with the mobster’s wife (Julia Fox), which seems…unwise. Charlie isn’t around long enough to have a back story, but he’s able to deliver Curt’s backstory to Ronald, and maintain peace between them long enough to eventually decide to kill everyone in the house.

Everything keeps escalating and escalating. It’s not greed, per se, but the further they get from their starting point, the more Curt and Ronald realise the importance, and therefore value, of what eventually comes in to their possession.

Eventually, as I think everyone in Detroit decides its more profitable to kill them than do anything else, they get to the classic big bad, who’s revealed to be not only untouchable, but unfazed as well by what’s happened, or even the vast sums he appears to be having to pay out.

In one of the flick’s other funniest moments, he refers to the racism, or, more correctly, anti-Semitism he used to face before he changed his name from Lowenstein to just “Lowen”, for more business success both in Europe and in the States, and how surely Curt can relate. Curt’s reaction is quite choice, I must say, if only in terms of how contemptuous he is of the comparison of their respective life stories.

Even though I joked at the beginning about this being an anti-corporate material dialectic about the robber barons atop the capitalist feudal structure, and that crime doesn’t pay unless you’re already rich, it’s probably more apt to point out that the point eventually becomes The House Always Wins.

The guys you would have at least hoped were going to be on the up and up are corrupt too. Only one person tries to do the right thing by telling the truth, and that helps the authorities, but not how one would hope. There are no righteous, but there are at least one or two people whose word counts for something.

I cannot say enough how great Don Cheadle is in this movie. He’s been great in a whole bunch of things, but what this reminded me most of was Cheadle’s great turn in Devil In a Blue Dress way too many years ago. One forgets how solid he can put a steely, dangerous character across because of the comic jolly japery of stuff like the Marvel flicks in which he’s played a role, and which have probably paid off several mortgages.

But they don’t let him do the stuff that he does here. He’s pretty amazing. He’s even better than Benicio Del Toro, who, to be fair, probably feels like he’s done enough acting in his time to be able to coast through the rest of his career. Neither of them overact in this.

He’s a strange character, the Russo one, in that he’s constantly drinking but there doesn’t seem to be either a reason, a comeuppance or a point to it, other than maybe being a bit of an alcoholic makes him less likely to see the peril that’s right in front of him.

But then there’s the angry racism that he exhibits, and we know people don’t get rewarded for that kind of shit these days, thankfully, at least in decent films.

Seeing Ray Liotta in this as a mob boss was a bit of a surprise, and then, something of a fright because, ye gods, I don’t know if it’s age or steps taken to hide the passage of time but there was something profoundly terrifying about his face. In the past it was his performances that could chill the blood, but these days it’s the texture of that material that covers his skull.

I suspect, though I don’t have a lot of proof for this, that his inclusion here is a bit of a cinematic in-joke(?) Liotta is of course most famous for playing Henry Hill in Scorsese’s Goodfellas, in which he memorably, in like it’s unlikely anyone who ever saw it could forget the scene, which we see twice, pistol whips a guy until there’s blood everywhere. When Del Toro’s character starts pistol whipping Ray Liotta, well, it’s hard not to see the connection.

Thankfully, because the character Liotta is an even bigger wifebeating piece of shit than the jerk he played in Goodfellas, I don’t feel as bad about his eventual fate here.

The other thing I feel compelled to mention is that, from other stuff I’ve read, much or most of this flick was filmed on an iPhone of some description, which is kind of amazing to me. I mean, it results in some very strange composition in some scenes, especially when the lens being used seems to be anamorphic, or a fish-eye lens which shows what’s dead centre fine, but the image at the sides is somewhat warped. I think I get a feeling for what he (the director, who’s also the cinematographer and the editor, regardless of what the fake credits say) was going for, but I hope it means saving on equipment and production costs means more money can be spent elsewhere, like on Benicio Del Toro’s ties, on classic cars or on tennis outfits for Julia Fox.

It does give a certain feel to much of the flick, kinda flattens things a bit too, and gives it this immediacy that is unusual in film. Unusual but not unique, because there’s plenty of other flicks that have done this too, and I have no problem with that. Soderbergh uses the constraint in a way that I think gives him a lot of freedom, and probably speeds up the filming process as well, which is always a good idea.

No Sudden Move is not groundbreaking cinema, it is a bit of a throwback, and it’s also a bit surprising to see Jon Hamm getting dressed up in the same kind of costumes that made him famous in Mad Men, all over again, playing a cop in the pocket of the corporations. He has the look of a chap that didn’t think he’d be wearing those 50s suits and hats, because he got out, but they dragged him back in…
I enjoyed it, heaps and plenty. It kept me entertained and mildly surprised for nearly two hours, and that is rare, though I am a sucker for this noir / crime bullshit, and this is done very well by everyone involved.

--
“All truths must be acknowledged, however painful they are, or else there’s not growth. And growth is the key. Growth. Progress.” – hooray for self-improvement – No Sudden Move