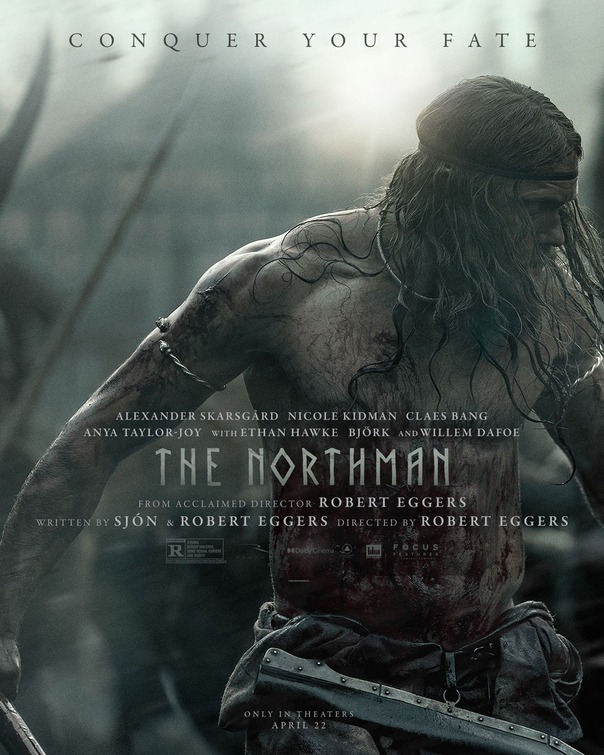 Here he is on his daily walk, keeping his steps up

There’s a lot that’s funny about The Northman, at least to me.

A lot of the film is practically in black and white. Not ‘real’ black and white film stock, just colour adjusted scenes to make it almost look monochrome. It’s something the director has done before, like in his last film The Lighthouse, which was all black and white.

I guess that’s not really “funny”, but I guess it makes the colours pop whenever fire is onscreen, or, I dunno, when someone’s chopping off people’s heads.

Another funny thing is that Alexander Skarsgard stars as the lead character Amleth, and Nicole Kidman plays his mum Gudrun. Anyone who watched or heard about that series on the tv called Big Little Lies where she and Skarsgard played husband and wife in an abusive relationship might wonder at how such a thing could come to be.

But then Kidman herself has what I think is the film’s shining moment, which I won’t spoil, but it’s a doozy. And then it all makes sense.

The other funny thing (I swear this is the last time I’ll use this construction), is that this is essentially a retelling of Hamlet, so it’s pretty familiar, but it’s based more on the older Icelandic tale that Shakespeare himself ripped off, with an abundance of more gore. So it’s like someone said “why don’t we make a new version of Hamlet, with buff Vikings and such, but throw out all the pesky cliché words that people are bored of?”

Robert Eggers is becoming quite a feted and respected director, despite the fact that he looks like a Mens’ Rights activist or like someone who’s going to ask you if you’re into cryptocurrencies yet. And yet he crafts a fairly brutal movie which doesn’t pander to mass audiences and leans in to the brutal, supernatural aesthetics of what life might have been like in 845AD.

The flick starts on some island, a place in which something could have decidedly been rotten, when a brutish king (Ethan Hawke) comes home from war to a son that adores him and a wife that, for very good reasons, doesn’t much care for him.

Luckily he has a brother Fjolnir (Claes Bang) that hates his guts who will soon commit the biblical sin of fratricide, will drag Gudrun away and kill the son Amleth too if he gets a chance.

The kid sees his dad being butchered, and scampers away to safety but not before cutting a guy’s nose off. That’s pretty harsh. Life is brutish and harsh. The guy without the nose declaims, out of embarrassment, that Amleth is definitely dead as dead, somewhere deep in the nearby waters, so no one go looking for him, because you definitely won’t be able to find him.

The little boy scampers somewhere, grows up to be a monstrously buff lad in the form of Skarsgard, and has been sustained over these years through his burning hatred for Fjolnir.

It helps that witchy and magicky people keep telling him everything he needs to know or do in order to enact his revenge. Like the Fates of Greek mythology, the Norse have the Norns, and they definitely want Amleth to exact his bloody revenge, because they know how cool it will look on screen in about 1177 years’ time.

And how great Skarsgard will look doing it. He’s tried actiony roles before as a lead, most catastrophically as Tarzan in a very ill-conceived remake, but he’s perfect here.

Perfectly believable as well as a rampaging berserker. He and a band of jerks attack a village somewhere in what we now call Russia, and they really don’t fuck around. They kill anyone and everyone they feel like, and feel great doing it. The purpose of the attack, other than the sheer joy of killing and raping, is for amassing a group slaves to sell.

It’s all about getting paid. For everyone else, not Amleth, of course. After he speaks to some mystical type, he has the brainstorm to hide away as one of the slaves, in order to be delivered to his uncle who has relocated to Iceland and become a farmer, and from there enact his bloody revenge.

It’s a damn shame that a) he now has to wear a shirt or tunic all the time, and b) goes from that flowing Viking mane to a bowlheaded peasant / slave haircut. Damn shame. But his time to shine will come again, you can be sure of it.

No-one recognises him in Iceland, but why would they? It’s been years since he’s seen his mum, and she seems pretty happy. She’s got a younger son she dotes on, an older step-son that she’s partial to, and a loving husband in the form of, um, Fjolnir?

Something doesn’t seem right, but Amleth knows he still has to do what he has to do, because he’s just doing what the Norns demand, what custom and his father would demand, and what the other slaves would really appreciate, in order to be free again.

If there’s one thing you can say in this flick’s favour versus other versions of Hamlet is that if dithering characters who can’t seem to make up their minds about their course of action piss you off, then fear not, because at no stage is Amleth ever confused as to what course of action to take. He kills people left right and centre with no doubt as to whether it is nobler in the mind to suffer the slings and arrows of outrageous fortune, or whether tis better to kill motherfuckers dead.

He elects the path of action, rather than that of doubt. And it’s funny, in that context, because there’s almost maybe a kind of argument to be made that maybe if he wasn’t as buff, as certain and hellbent on revenge, then maybe everything would have been better for all concerned (except maybe him).

Maybe way better? Could he not have stayed on the boat fleeing Iceland for the Orkneys, with his newly beloved and impregnated Ophelia, sorry, I meant Olga (Anja Joy-Taylor); couldn’t everyone and everything just been left as it was, and life continued, and most people (except the slaves) would have been okayish if not great?

He is told he will have to make a choice (told this by a seer played by Bjork, of all people) between being kindness for his kin or hatred for his enemies. A choice. It implies a binary, like either one or the other. He claims, late in the flick, that he will chose both, as if that’s ever worked.

Maybe you could claim that he makes the non-binary choice, but I would not be so bold.

I think this flick works pretty well. It’s a deliberately difficult and awkward flick, uncomfortable in its emotional range, and that works fine. One quality that surprised me, since fantasy stuff and revenge, and stuff about Viking types are a dime a dozen, is that this flick resists the easy familiar paths, and even aesthetics. It doesn’t just go for an ugly and messy depiction of life at that time, with lots of cold people covered in mud all the time, but it depicts even the “heroic” Amleth as being feral, fucking feral. Instead of manfully striding around in slow motion with his head held high, his hair streaming in the wind, his every move accompanied by choirs of angels praising his every noble action, this guy grunts and gnarls about hunched over like a bear despite his great height looking every bit as feral as the local wolves and foxes. When he howls all the dogs go berserk, because even they’re shit scared.

We all know how it ends. You can’t tell this story without an absolute catastrophe at the end, but this evocative and darkly humorous telling of the tale at least makes it seem like Amleth had a choice, had a say in what was to come, and could have chosen some other path.

But once you’re convinced that you have to die naked in a lake of fire after cutting off your uncle’s head, well, why would you choose any other way to go?

The Northman was a rollicking ride for me. More Conan the Barbarian than Bard is all right in my book.

8 times do not fuck with the Skarsgard out of 10

--
“A life of death. Yet I swore to survive till this moment. Tomorrow, I shall finish my deeds in honour. Only then will I discover whether living is to my liking.” - The Northman