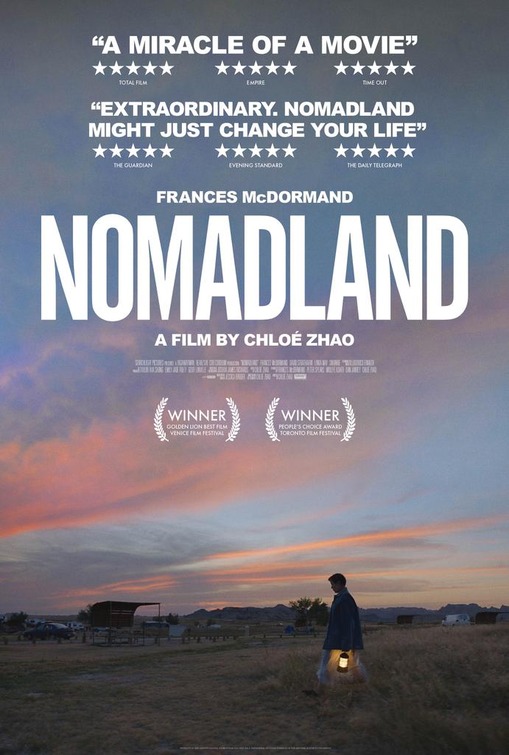 Life is brief and all too long, together or apart

Nomadland is a beautiful, sad film. I have no doubt it’s about something to the people that made it, but mostly, it just seems to be about a woman with no home who drives around, does odd jobs, and meets a few people.

Imagine trying to sell that idea to a studio, to get them to make your film.

Well, it helps if the person is Frances McDormand who read the book by Jessica Bruder, and thought “this would be a good movie with me in it”, and she was not wrong, because she’s rarely wrong. She’s been a tremendous actor for decades, but she’s not as beloved by the media as the Streeps and, I dunno, the Cate Blanchetts of the world because she doesn’t seem to give as much of a shit about the fanciful stuff around the movies versus the movies themselves.

If a person was being uncharitable one could argue being married to a Coen Brother is an incredible advantage in such a ruthless world of cinematic shenanigans. You might argue that’s how she got her first Oscar, but that doesn’t explain the other two, or all the great roles she’s assayed, in pretty much everything she’s ever done. Plus she was great in Fargo independent of who directed it.

The keen intensity she brings to most of her roles is directed elsewhere here. Her character of Fern exists, does things, has a backstory, but she’s not really the protagonist of this story. This story doesn’t need or have a singular protagonist. She does things, a bunch of things, and talks to a bunch of people, but she underplays everything in a way that people confuse with naturalism or underacting, which, if ever you’ve seen non-actors act whenever a camera is on, we should know is anything but easy.

Her character has lost her husband of however many years, but she’s also lost her home, her sense of place, any feeling of a safe harbor in the world. The town she lived in disappeared not because of her husband’s death, but because the town itself died when the one business shut down. The town of Empire, Nevada, is a real place, and all that’s referred to actually happened. A town with a population of 750 fell to zero when US Gypsum closed the mine. No mine, no reason for the town to exist.

Fern has no reason to stay there, and couldn’t anyway, what with the fact that it stopped existing and probably no longer had services, power, water supplied once it became unincorporated.

These kinds of stories often have a person hungering for a new sense of belonging, of a new place to call home, a new found family to make up for the one lost. I hope it’s not too much of a spoiler to point out that that’s not where Fern seems to be coming from. Her travels and travails, of course, are used to illuminate aspects of life in corporate America, where the wealthiest company on the planet that sends its CEO into space employs itinerant workers on short term contracts and houses them in trailer parks who have to piss into bottles because they don’t get bathroom breaks.

But that happens in tandem with the fact that she has to move around a lot in her van. She is not seeking this community of vandwellers, but occasionally she hangs out with them.

There is nothing romantic about this lifestyle, as depicted. Other characters, playing themselves, non-actors at that, get to talk to each other or to Fern about the joys and freedoms of this lifestyle, and I have to assume that they genuinely believe all these things they say, but Fern is never one of them. She never extols the virtues of nature or the open road, the benefits of a rootless existence, because it’s not like she’s got a choice.

Despite namechecking Jeffrey Bezos’s galactic ego in a previous paragraph, I’m not implying that this flick is a polemic arguing that supply-side trickle down economics has destroyed all these people’s lives, and that they’re trying to eke out a meagre existence on the margins at corporate gunpoint. Many of the other people Fern encounters have their own, personal reasons for wanting to be where they are, and none of those are the contrivance of a screenplay. Even though they’re playing slightly fictionalised versions of themselves, at least three of the people Fern spends time with are playing, essentially, themselves. Linda May, Charlene Swankie and Bob Wells play Linda May, Swankie and Bob Wells; the only difference is that in the film Swankie passes away, but in real life she continues to live her Swankie lifestyle.

And they’re such lovely, real people, at least in terms of how they come across here, and McDormand does best just by doing nothing next to them, and letting them have their scene, their moments.

One other actual actor not playing a homeless itinerant is acclaimed actor David Strathairn, playing Dave here, in a brilliant bit of casting. He, too, does the bare minimum of acting, which helps sell his character.

They first meet at the Arizona van meetup, and then keep crossing paths down the road, and you start thinking, well, the obvious, in terms of: When will Fern allow herself some happiness and let go of the past and embrace the possibility of a future with Dave, whether on or off the road?

And you’d have to have been watching a different film to think that was ever going to happen. We never get the sense that that’s what Fern’s after, at any stage of the flick. The only emotion she ever seems to want to express is an insurmountable grief and no desire for almost anything other than to get by, and move on.

She doesn’t, and this is going to sound a bit mean / controversial, seem to want any other people around at all. It’s not that she seems to crave isolation, or annihilation or to stick it to the Man or to anyone by rejecting society and its wicked ways, she just seems lost and like someone who wants to stay lost.

And that’s okay, I guess(?) We, in the audience, perhaps are programmed to want certain things for characters, maybe stuff we project onto them, ways that we have learned from so many mediocre films and people’s own stories about what mattered to them in life on the way to its dark, lovely end. And that’s not this film, not what it’s going for, which is probably why something so resolutely lowkey somehow won everything.

As an example of where I think Chloe Zhao’s masterful direction is coming from, in tandem with the solid cinematography of Joshua James Richards, there are countless scenes set in nature where you know the temptation from another director would have been to get picture perfect postcard shots of Monument Valley or hundreds of other sites of natural beauty. Shots that would have emphasised the minuteness, the insignificance of people in the fact of it all.

Somehow they strive to always put the human scale in front of these wonders, in order to say “no, fuck that, these people and their lives matter too, and they’re not insignificant at all, buddy.”

Another example is the sequence where Fern’s van, inevitably, breaks down, and she has nowhere near the funds to pay for the repairs. She calls someone we otherwise haven’t heard of, being Dolly. It’s not the actual Dolly, patron saint of country and literacy and vaccines, but Fern’s younger sister Dolly.

In a different film, the scene where sister interacts with sister, they would have used it for cheap drama, resentments rise to the surface, people get catharsis.

Instead, younger sister who’s loaded, hands money to elder, and pretty much says “I always thought you were awesome, and I wish you were in my life more” and that’s that. That kicked me in the heart as well.

There are a lot of touching moments in the flick, but it’s not an emotional rollercoaster or anything, seeing as lowkey in all things is the intention. Plus there are scenes of people talking about shitting in buckets, and scenes of people shitting in buckets, so you can’t expect such a flick to be highfalutin or pretentious with its emotional range and to have treacly moments every fifteen minutes.

Overall, the feeling I was left with was one of sadness, but that’s okay. Sadness is such a lovely emotion to be left with after watching anything, as compared to the vast nothing that the majority of flicks that come out that we inflict upon ourselves.

Loss should bring us sadness. Freedom isn’t a wide open road full of possibilities and second chances and new romances; it can also be lonely and isolating and freeing and a multitude of other things, and I think we get to see a lot of that in McDormand’s performance, as she seems to cut away a bunch of the elements actor’s rely on to bring a character to life.

Nomadland is a pretty amazing flick that I waited way too long to see.

8 times that itinerant life is not for me, though, out of 10

--
“So it looks like I'm flying with the swallows and they're under me, and over me, and all around me. And little babies are hatching out, and eggshells are falling out of the nest, landing on the water and floating on the water. These little white shells. That was like, it's just so awesome. I felt like I've done enough. My life was complete. If I died right then, at that moment, would be perfectly fine.” - Nomadland