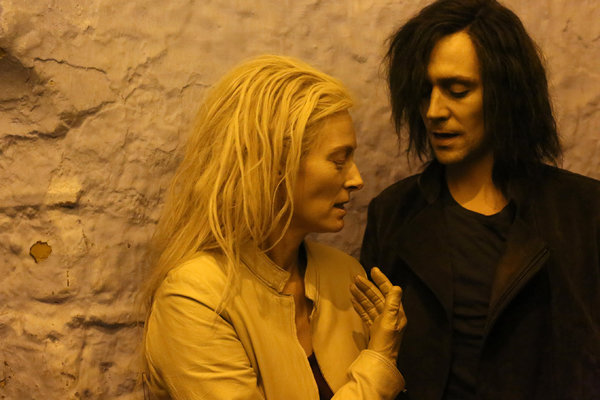 Only watchers left awake will be the ones predisposed to liking Tilda,
Jarmusch, Loki and / or old guitars

It’s a film about vampires, and that’s enough to send up red flags. There have been exactly 14,798 vampire movies made in the last 10 years alone. The world needs no more. No more, never again, never.

It’s a Jim Jarmusch film about vampires, though. That sends up a sequence of red flags in itself. The idiosyncratic director has never bothered making movies that sit well with mainstream audiences, and this is even more eclectic that what he usually manages.

This is where the stream of caveats begins: an audience member being able to enjoy a film like this is going to depend entirely on whether they can watch films about characters who don’t really do that much for two hours. It’s a strange little duck that gets excited about such a prospect.

Calling Jim Jarmusch’s film’s slow kinda misses the point. They’re frustrating until you understand that the tension generated in scenes that aren’t speeding towards the next point on a plot line is your doing, not the film’s, and misses the whole bloody point of him making films in the first place.

What destination, impatient person? Who promised you a speedy cab ride along a sequence of highs and lows, before some pat denouement and closure is achieved for everybody concerned? You bought a ticket to the tea cup ride and are angry that it’s not the rollercoaster?

If you’ve never gotten into his films before – wait – if you watched Mystery Train, and didn’t get the point that it was about how cool Elvis/Memphis is, or that what happened with Screamin' Jay Hawkins in the lobby of the hotel was the whole point of the film instead of the gun shot, then you’ve probably never liked any of Jarmusch’s films, and you’re most likely never going to. Including and especially this one. Whatever you might say about his other films, all of which I’ve seen, most of which I’ve liked (except Broken Flowers, which I hated), some things happen in them. Very little “happens” in Only Lovers Left Alive.

Beyond liking ‘slow’ films or liking Jarmusch’s films, the main attraction for me is seeing Tilda Swinton. As she is the Greatest Living Actor™ in the world currently, it behoves me greatly to see her in pretty much anything she ever does, and I do. So, not to detract from Mr Jarmusch’s joy at the prospect of my reviewing one of his films (it’s a great honour for you, I know), but, honestly, it’s only because of Tilda.

And the fact that Tom Hiddleston is in it as the other main character doesn’t hurt either. Best known for playing Loki in those deranged Marvel flicks, he plays a far more subdued character here, subdued to the point of general anaesthesia.

Adam (Hiddleston) shuffles dolefully around a decrepit two-storey house in a decaying and mostly abandoned suburb of Detroit. It’s not made explicit at first that he is what we come to know him to be, but you get the picture. His grumbling demeanour and sour disposition could only really be that of a much older man, so naturally his “get off my lawn” type attitude and reclusiveness point to a being who is several centuries old.

On the other side of the world, Eve (Swinton) lounges around in Tangiers. She is every bit the counterpoint to Adam’s brooding (aesthetic) darkness. She is far more at ease with her extended existence, but is bound by the same requirements. Blood is not a metaphor for drug use or heroin specifically – it’s treated as a direct analogue, as being of virtually no difference to them both (Adam and Eve). When they get hooked up to the good stuff by their connections, and sip their sips simultaneously, it’s visually depicted as the same as a heroin hit in terms of its effect, and at least as shooting up is depicted in movies.

Surrounding all of this is a fussily curated set of aesthetics and references. It’s the polar opposite of what Wes Anderson does, considering how messy, dishevelled and dirty everything is, but it perhaps springs from the same kinds of personal needs. The music is exactly whatever ‘old’ songs Jarmusch really likes, some real old school humdingers, and a lot of the moody score is by Jarmusch himself (his band being called something like SQURL? I think there’s an umlaut or something over the ‘U’).

For my money, the way in which the flick pretty much started with his great, lumbering version of Wanda Jackson’s Funnel of Love, played on an 'ancient' 45 on a record player, sounding menacing and opiated all at once, pretty much sold me on the rest of the flick as well.

It doesn’t take much, sometimes.

There are references upon references, and they don’t really inform the story or any of the themes you might imagine, and dependent upon your mood, it could be fine or highly irritating. Monstrously irritating. When Adam goes to a haematologist to score some pure blood, he dresses as a doctor, and has a nametag that titles him Dr Faustus at one point, Dr Caligari at another. The other, actual doctor’s nametag titles him Dr Watson.

Hurr, hurr, we get references!

If you find that the peak of side-splitting comedy, then perhaps the entire film will tittilate and demolish you with its hilarity. For me, they were just moments where I said to myself “So that happened” as the flick casually sauntered on from there on, and you wondered, if only briefly, what the point was.

Jarmusch’s other interests are also on display, like in the alternative power generation theories of Nikola Tesla, filtered through Adam’s apparent appreciation for or patronage of various creators and scientists throughout history. Again, it’s something just mentioned, not followed up, and it serves little purpose other than telling us what a well-rounded and erudite chap Adam (really, Jarmusch) is. Though there is a pretty funny running joke about Adam being offended by the shoddiness of crappy electrical work.

Adam’s only contact with the world outside his decaying crap shack is a human called Ian (Anton Yelchin) who, not knowing he’s a vampire, thinks Adam is the rock star to transcend all other rock stars. He brings him classic guitars, and Adam waxes rhapsodically about them, recalling when he saw various early rock legends play on them in their first gigs. He adds the instruments to his piles and piles of old stuff, lots of old stuff, a hoarder who hoards for no other purpose than to hoard the past.

He (director or main character, take you pick) bluntly, obviously and repeatedly is telling us that old, retro stuff is cool, and ‘new’ stuff , whether it’s technology or music , both without history, no matter how shiny, is all crap.

Truly, it’s the first time I’ve ever heard this argument and I wonder whether I’ll ever hear its like again.

Some people have lingered along in life too long to still enjoy its pleasures or savour its virtues. An ancient vampire who keeps longing for the past is never going to find pleasure in considering the present or the future, so Adam’s moping, shuffling, complaining and harping are really all pointing to one thing: few beings have the stamina for immortality. Really, he just wants everything to end, and end soon.

Eve is not in the same place as he is, and, when she catches glimpses of his disengagement and ennui during a Skype chat across updated or repurposed ‘old’ tech (on Adam’s part, since she’s happy to have an iPhone), she sees that she needs to save him from himself, and doubtless she’s seen this mindset in Adam before.

You’d think things would start happening once the two long, long term lovers are reunited, but the lot of the life of these kinds of vampires doesn’t allow for much doing of stuff. They’re rich, dissolute, elegant junkies, and they seem to spend most of their time sleeping, sleeping and sleeping in between hits.

It does allow for a great image of Adam and Eve sleeping naked, as if to bring to mind the classic photo of John Lennon and Yoko Ono.

Also, just to say to everyone “Hey! Look how thin we both are!”

For a brief time, a hurricane named Ava (Mia Wasikowska) arrives to torment them, acting like an uncontrollable child, from which a lot of ‘parental’ style ironic humour is meant to arise. It works, mostly, and gives the film a bit of a much needed charge for a while. They end up getting out into the world, if only briefly, leading to a moment that made me genuinely laugh out loud, with nothing more than just the putting on of a pair of sunglasses.

There is a price to pay for such energy, though, and it’s a price none of the vampires pay. It might seem that there is somewhere naturally for the story to go, but I wouldn’t say it does. They have a friend in Marlowe (John Hurt), who seems even older than them, and his story has a sort-of trajectory, even the possibility of sadness, but he’s not in it enough to really be affecting. He does get one of the funnier lines about wishing he’d met Adam before he’d written Hamlet (yes, he’s meant to be that Marlowe, the Elizabethan playwright). Mostly, he’s wasted, in both senses of the word.

And yes, Shakespeare was an illiterate hack, not like the brilliant writer/director that is Jim Jarmusch. He may have crafted a lazy story to go along with even lazier performances, but I still enjoyed it, though not immensely. Ghost Dog: Way of the Samurai is still my clear favourite of his films, but this isn’t a competition, I know, I know.

A trip through a decaying Detroit carries with it a certain frisson, a certain Ozymandias-like statement about the arrogance and folly of men who think their great works, their great powers, whether technological or economic, will be eternal. It’s not even just the touring of abandoned opera houses and factories and such, it’s the knowledge that street after street of abandoned factories, businesses and homes weren’t a special effect, wasn’t created via CGI for this flick, because all Jarmusch did is drive around contemporary Detroit and film stuff for several hours. That knowledge is more chilling than anything these vampires do in the two hours we spend in their somewhat enjoyable company.

--
“Her name is Yasmine. She'll be famous one day.”
- “I hope not. She's too good to be famous.” – bloody deathless hipsters – Only Lovers Left Alive